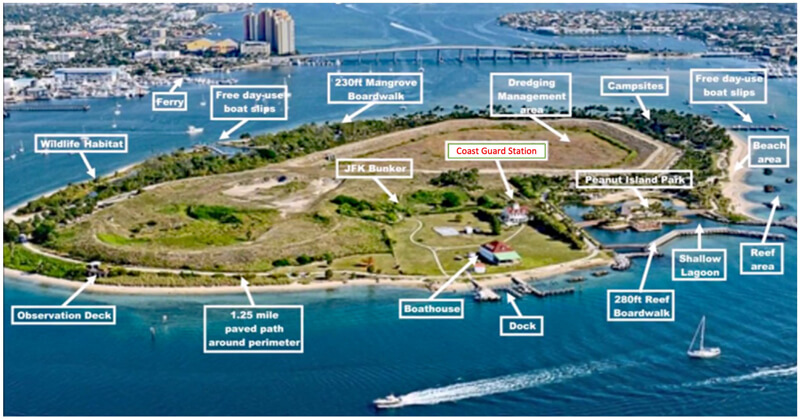 The Port of Palm Beach Commissioners Tuesday voted unanimously in favor of a temporary agreement that would allow Palm Beach County to take over maintenance of the Peanut Island Coast Guard facilities. The Coast Guard facilities are owned by the port.

The vote was deferred from November’s meeting. The next step is for the agreement to go before the Board of County Commission for final approval.

The facilities, including the Coast Guard Station, Kennedy Bunker and a boathouse, are in disrepair and have been closed to the public.

Most of the 80-acre Peanut Island is a county park and is maintained by the county’s Parks Department. The county is currently managing recreational areas on Peanut Island adjacent to the Coast Guard facilities, which include beaches, restrooms, pavilions, a snorkeling lagoon and boat docks, Both the port and the county want to renovate the facilities and reopen them to the public. But in order to do so, they need to secure grant money. Both entities are hoping that once they ink the temporary agreement, it will lead to a longer-term agreement, which would allow the county to secure funding for the renovations from a variety of grants.

According to the agreement, the port will pay the county $5,500 a year to cover the maintenance and the port maintains jurisdiction over the facilities, including operating and maintaining all security cameras affixed to any structure. The agreement can be terminated by either party with 30 days-notice.

[April, 2018] The Cold War-era John F. Kennedy bunker, former Coast Guard station and boathouse on Peanut Island in the Intracoastal Waterway are among Palm Beach County’s historic gems, but it will take $4.4 million to restore the neglected properties.