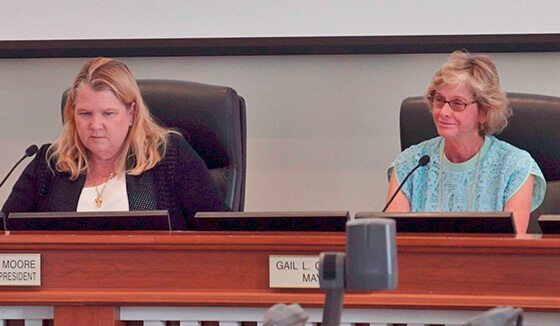 Mayor Gail Coniglio and Council President Danielle Moore have filed papers to run for reelection and are unopposed so far, according to documents filed with the town clerk’s office.

Councilwoman Julie Araskog also is running for a second-term. She is opposed by Richard Rene Silvin.

The Town Caucus is set for Tuesday, January 8 at 7 p.m. in the Town Council Chambers. Voting in the general election will take place March 12 from 7 a.m. to 7 p.m.

Mayor Coniglio served 12 years on the Recreation Advisory Commission and served two years on the Landmarks Preservation Commission. She also is a long-standing member of the Town of Palm Beach United Way. More than 30 years ago, Mayor Coniglio founded a signature community service project that benefits children from migrant worker communities. In 2003, she received an award from the Palm Beach Chamber of Commerce in recognition of her activism on behalf of children.

Council President Danielle Moore was elected to the Town Council in 2015 and was re-appointed unopposed in 2017. Prior to her tenure on the council, she has served the town as a member of the Recreation Advisory Commission and on the Planning and Zoning Commission. Ms. Moore sits on the boards of many charitable organizations. She is president of Fortin Enterprises and president and a director of The Mary Alice Fortin Foundation.

Councilwoman Araskog was elected to the Town Council in February 2017. She has been an advocate for juveniles and is currently a Palm Beach County Guardian Ad Litem. Ms. Araskog is a member of the Preservation Foundation of Palm Beach and the Palm Beach Civic Association. She has been visiting Palm Beach since 1993 and moved here permanently in 2013.

Mr. Silvin is an author, historian, lecturer. He is known for his expertise on Palm Beach history, Addison Mizner, the Duchess of Windsor, the SS Normandie, and Mar-a-Lago.

Both incumbents recently filed qualifying papers in the town clerk’s office. So far, no opposition has emerged.