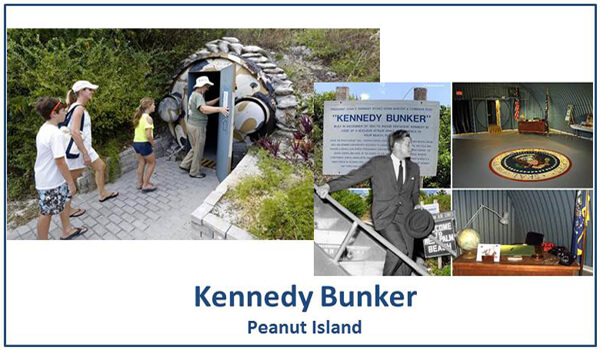 If you’ve never been to the Cold War-era John F. Kennedy bunker on Peanut Island, you’d better hurry. It’s closing Oct. 22, and it’s not known when it might re-open.

The iconic property’s management is in a state of flux as Palm Beach County begins to consider whether to take over operation of the deteriorating treasure.

The Port of Palm Beach in Riviera Beach across from Peanut Island owns the 6 acres that are home to the bunker built in 1961 as a top-secret nuclear bomb shelter for Kennedy in case there was a nuclear attack while he was visiting his “Winter White House” — the Kennedy compound on the north end of Palm Beach.

Palm Beach County and the Port of Palm Beach are exploring the county taking over the Kennedy Bunker and Coast Guard Station on Peanut Island. Note: This is a developing story and a nothing is final yet.

Several areas are under review: