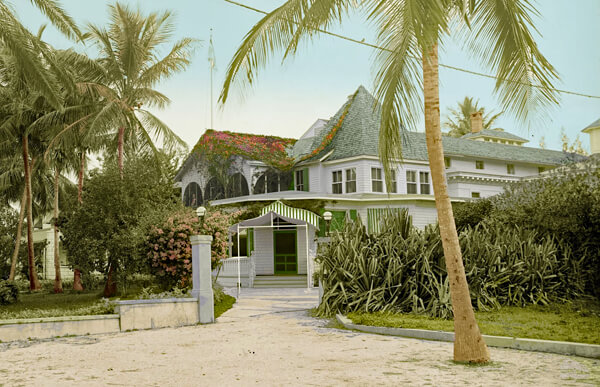 The Civic Association is 75 years old this season. We are looking back at what has gone on during that time. We’ve researched a timeline and found many old photos, articles, and Civic Association meeting minutes.  Photo above: Colorized photo of E.R. Bradley’s Beach Club from the Library of Congress.

See our updates each week.

Civic Association Issue – June 5, 1945:  Page Hufty, acting chairman of the newly formed Palm Beach Civic Association executive committee, sent a letter to the Town Council from the Civic Association, saying the organization was opposed to the operation of any gambling establishment in the town and was ready to use “all legal and proper means to prevent such operation.” Town authorities were known to turn a blind eye to the gambling at Col. E.R. Bradley’s private Beach club. The club operated from 1898 to 1945 and was located on Royal Poinciana Way, where Bradley Park is today – just east of the Flagler Memorial Bridge.

Although gambling was illegal in Florida, The Beach Club’s charter permitted it to conduct “…such games of amusement as the management of the same and its members may from time to time agree upon.”

The club was open for breakfast, lunch, and dinner and gambling was known to continue 24/7.

When Mr. Hufty, from the Civic Association, wrote the letter to the town, Council President Claude Dimick Reese suggested, according to the Palm Beach Post, “…that the town ascertain what percentage of Palm Beach property owners are represented in the association’s membership.”  Claude Reese was Col. E.R. Bradley’s godson. – June 6, 1945, Palm Beach Post

The Civic Association had over 300 members by then according to archived minutes.  The Beach Club closed that year.

Col. Bradley was in ill health and died in 1946. Members of his club were a who’s-who of society and business. No Floridians were allowed to be members. Only the wealthy from out-of-state.