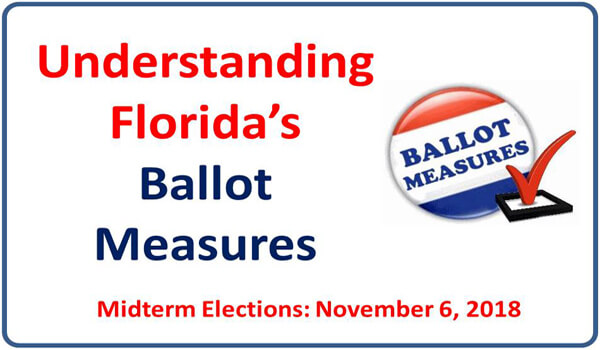 The state Constitution Revision Commission, which meets every 20 years, finished its work after approving eight proposed constitutional amendments for the Nov. 6 general-election ballot.

Those 8 proposals will join five other measures already on the ballot, including 3 approved by the Legislature and 2 approved in petition drives, to bring the total to 13.

Commission Chairman Carlos Beruff said he was pleased with the outcome of the work.

“From protecting our state and territorial waters from oil drilling to strengthening our ethics laws, I commend my fellow commissioners for their hard work and leadership representing the people of Florida,” Mr. Beruff said in a statement. “We are grateful to the thousands of Floridians who participated in this historic process and look forward to letting voters have the final say in November.”

Here are the commission measures headed to the November ballot, with the ballot numbers:

• VICTIMS’ RIGHTS AND JUDGES (Amendment 6): It would establish a series of rights for crime victims, including the right to be notified of major developments in criminal cases and the right to be heard in legal proceedings. It would increase the mandatory retirement age for judges from 70 to 75. It would provide that judges or hearing officers should not necessarily defer to the interpretation of laws and rules by governmental agencies in legal proceedings.

• FIRST RESPONDERS AND HIGHER EDUCATION (Amendment 7): It would require the payment of death benefits when law enforcement officers, paramedics, correctional officers and other first responders are killed while performing official duties. It also would apply to Florida National Guard and active-duty military members stationed in Florida. It would establish a governance system for the 28 state and community colleges. It would require a supermajority vote by university boards of trustees and the Board of Governors when raising student fees.

• PUBLIC SCHOOLS (Amendment 8): It would impose an eight-year term limit on school board members. It would allow an alternative process for approving public schools, including charter schools, rather than by local school boards. It would establish a requirement for the teaching of civic literacy in public schools.

• OIL DRILLING AND VAPING (Amendment 9): It would prohibit drilling for gas and oil in state coastal waters and ban vaping and the use of electronic cigarettes in workplaces.

• ETHICS (Amendment 12): It would impose a six-year lobbying ban on former state elected officials, state agencies heads and local elected officials. It would also create a new ethics standard that would prohibit public officials from obtaining a “disproportionate benefit” from their actions while in office.