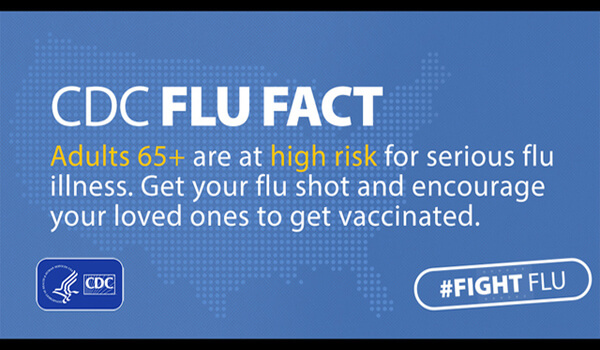 Center for Disease Control (CDC) News Release — It has been recognized for many years that people 65 years and older are at greater risk of serious complications from the flu compared with young, healthy adults because human immune defenses become weaker with age.

While flu seasons can vary in severity, during most seasons, people 65 years and older bear the greatest burden of severe flu disease. In recent years, for example,it’s estimatedthat between 71 percent and 85 percent of seasonal flu-related deaths have occurred in people 65 years and older and between 54 percent and 70 percent of seasonal flu-related hospitalizations have occurred among people in that age group. So influenza is often quite serious for people 65 and older.

Actions To Take This Flu Season:

Flu symptoms include fever, cough, sore throat, runny or stuffy nose, body aches, headache, chills and fatigue. Some people may also have vomiting and diarrhea. People may be infected with the flu and have respiratory symptoms without a fever.