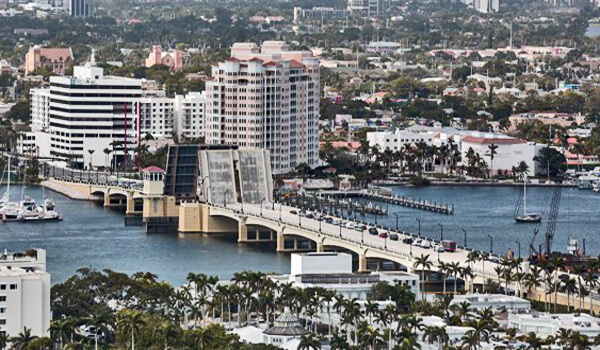 “The software needed tweaking” said Geoff Parker of New Millennium Engineering, a consultant to the Florida Department of Transportation, at the Palm Beach Town Council meeting today.  That is what is causing the repeated Flagler Bridge malfunctions.

Malfunctioning Bridge to Get ‘Expert’ Treatment

By: R. Michael Brown, Civic Association Communication Director — What do April 20, April 12, March 27, three times on March 26, January 3, September 21 have in common?  Those are days, along with many others, that the new Flagler Memorial Bridge malfunctioned and traffic had to be rerouted off the bridge.

The new bridge, known as the “North Bridge” opened July 31, 2017 after five years of construction costing $106 million. It was built with the intention of lasting 75 years. But, it’s far from reliable.

During one streak of malfunctions: “The contractor is performing several tests and troubleshooting to correct the issue,” said Angel Streeter Gardner, community outreach specialist for the Flagler Memorial Bridge. “We are continuing to monitor the situation to ensure the issue is resolved.”

Early on, there were signs of trouble: “As this is an intermittent issue, it is more challenging to pinpoint than an issue that manifests itself on a consistent basis,” Ms. Gardner said. “However, the contractor is close to figuring out the root cause. We are confident the issue will be identified and rectified soon.”

Finally on Monday of this week, Ms. Gardner told the Civic Association in an email, “As a result of recurring bridge malfunctions, the Florida Department of Transportation has initiated an independent review by movable bridge experts which starts tomorrow [Tuesday, April 24]. This should provide direction as to what adjustments are necessary to ensure the new bridge operates reliably, as it was intended.”

The last traffic study, completed before presidential visits began, more than 16,000 cars and trucks travel over the Flagler bridge. Closing it to traffic has sent most drivers to the Royal Park Bridge (middle bridge).

Now with the Southern Blvd. bridge construction and presidential visit roadblocks, that number has to be much higher.

Residents, visitors, and those that work on the island, and depend on the north bridge, are looking forward to answers and a permanent fix.

Officials identify cause of Flagler Bridge malfunctions in Palm Beach

Software problems have caused the repeated malfunctioning of the Flagler Memorial Bridge, a transportation official told the Palm Beach Town Council today. “The software is what runs the bridge,” said Geoff Parker of New Millennium Engineering, a consultant to the Florida Department of Transportation. “The software needed tweaking.”