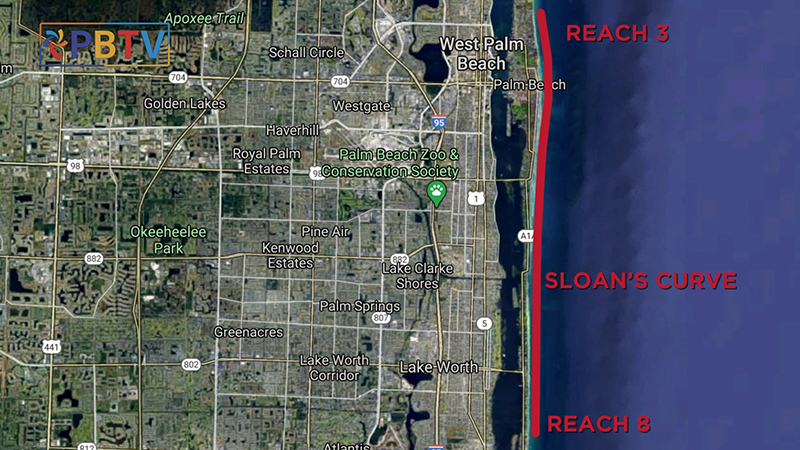 A sand fill at Phipps Ocean Park/Reach 7 may not happen this winter and spring because of differences between the town and two neighboring condominium associations. The buildings at 2100 and 2000 Sloan’s Curve, immediately north of Phipps Ocean Park, contend that nearby offshore sand dredging for the beach fill causes erosion to their beach, which does not fall within the permitted fill area. They have asked for legally binding assurances from the town that it will repair any erosion to their beaches for five years after the dredging occurs – even if the cause of that erosion is not determined or agreed upon. Town officials say that’s unreasonable and unnecessary.

Public Works Director Paul Brazil told the Town Council Feb. 9 that the beach in front of the Sloan’s Curve buildings is in good shape. Brazil said the town will add sand to the dune system that provides storm protection for 2000 and 2100 Sloan’s Curve as part of the Phipps/Reach 7 project. But state and federal permits do not allow the town to do more than that because of concerns about dredged sand covering nearshore reef and marine habitat, he said. “If we did something to cause harm, we would fix it,” Brazil said. “We have used this borrow area before and [the Sloan’s Curve buildings’] dunes are still there.”

Time is running out on the sand fill project, which was scheduled for this winter and spring, and which must be completed by May 1 because of sea-turtle nesting season, Coastal Program Manager Rob Weber said Thursday. If the work isn’t done this winter and spring, the town is likely to lose $10 million in beach restoration aid awarded by FEMA to repair beach damage caused by Hurricane Matthew in 2016, Weber said.

The town awarded a contract in October to Weeks Marine to dredge nearly 500,000 cubic yards of sand and place it on the beach for $8.5 million. The FEMA grant would cover 75 percent of the cost for Phipps/Reach 7 project, which extends along 1.6 miles of shore from the northern tip of Phipps Ocean Park southward to R.G. Kreusler Park near the Lake Worth Pier. The town is counting on the remainder of the FEMA grant to pay for dune restorations in front of the Sloan’s Curve buildings, and in Reaches 3 and 4 (extended Midtown Beach); Reach 8, south of the Lake Worth Pier; and Reach 9 in South Palm Beach.

The Phipps/Reach 7 project is permitted by the federal U.S. Army Corps of Engineers and the Florida Department of Environmental Protection under the Palm Beach Island Beach Management Agreement, which Weber said is expected to issue a letter of approval for the project in the coming days. Once the approval letter is issued, it triggers a 14-day period where the applicant or affected parties can request a hearing before an administrative law judge. For procedural reasons alone, that hearing – regardless of the outcome – would stop the project from happening this winter and spring and prevent the town from using the FEMA grant, Weber said. The Sloan’s Curve condominium groups say their beach suffered severe erosion after the last town renourishment of Phipps/Reach 7 in 2016. They are represented by attorney Joseph Goldstein, of the law firm Shutts & Bowen, and they have hired coastal engineering consultant Karyn Erickson, who contends the town’s offshore dredging for the 2016 beach fill greatly accelerated beach erosion at Sloan’s Curve.

As part of the talks with the Sloan’s Curve associations, Weber said the town has agreed to modify the dredging operation so that work is farther from the shore. Steve Tannenbaum, president of the 2100 condominium association, told the council he is requesting a contract with the town to protect the Sloan’s Curve homeowners “so the project can be a win-win.” “We want Reach 7 to proceed without delay, but without any [sand] deficit to our owners,” Tannenbaum said. “The dredging plan and sand borrow site present a problem for our properties. We won’t challenge the [DEP] permit if the town agrees to mitigate any negative impacts. The town offers verbal assurance. We want something legally enforceable.”

Mayor Gail Coniglio and the Town Council agreed with Brazil and Town Manager Kirk Blouin that signing a private agreement with the Sloan’s Curve groups is not an option.
“We are talking about losing $10 million in federal money, and foregoing beach restoration, [including new dunes] for Sloan’s Curve,” Councilman Lew Crampton said. “They are asking for something that is unreasonable, something we can’t do, and it’s not taking the best interest of the town at heart … it’s saying, ‘we want what we want because we don’t trust you,’ and that the town, state and [U.S.] Army Corps are all wrong.”

At the council’s request, negotiations were continuing as of Thursday, Weber said. “We’re doing everything we can,” he said. The Sloan’s Curve buildings contract proposal also would call for the town to step up shore monitoring, pursue regulatory approval with the federal government to expand the Phipps/Reach 7 nourishment area to include the Sloan’s Curve condominiums’ beachfront, and to pursue a “structural solution,” such as groins, to further protect the Sloan’s Curve shoreline. Brazil said those measures were considered by the DEP and U.S. Army Corps of Engineers about 15 years ago.

The town originally proposed to include the Sloan’s Curve beachfront within the Phipps/Reach 7 beach renourishment footprint but removed it after the permitting agencies expressed concern about burying environmental resources there under a lot of sand, Brazil said. “The Army Corps’ Environmental Impact Statement showed that the benefits of the project [a full sand nourishment on the beach at 2000 and 2100 Sloan’s Curve] would not outweigh the negative impacts,” Brazil said. Coniglio said it’s not in the town’s interest to fight with the DEP or Army Corps. “We have determined that permitable projects are the ones we need to embrace,” she said. The Reach 7/Phipps project is important to protecting the homes of many residents, Coniglio said. “The $10 million is huge to the town and taxpayers,” she said. “The loss of [this] sand will compound over the years … If this dredging does not occur we are putting the entire South End at risk.”