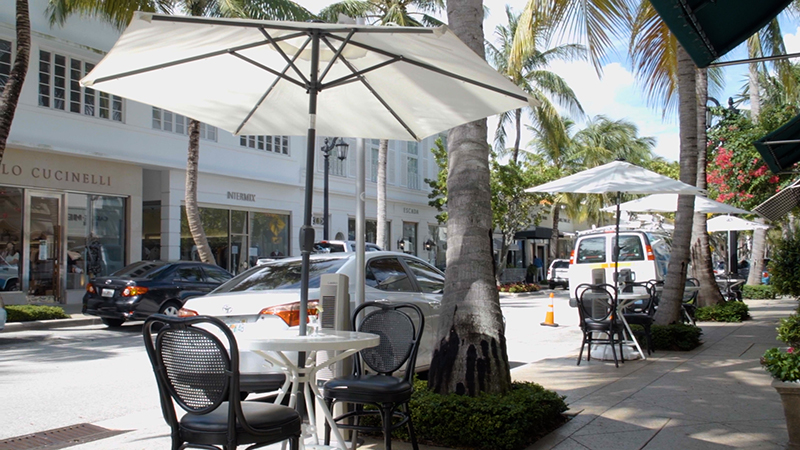 Al fresco dining has flourished on the island during the past year as the town worked with restaurants to temporarily loosen restrictions on outdoor seating.

That’s been a lifeline for restaurants struggling to remain open while indoor seating capacity was legally curtailed during the Covid-19 pandemic.

The shift toward al fresco dining proved to be popular, pumping more life into courtyards, onto sidewalks and other outdoor spaces.

But it was only possible because the Town Council and staff adopted a more flexible stance on outdoor seating rules during the pandemic.

Last month, the council asked staff to look at the regulations for outdoor seating as a first step toward a permanent expansion of it.

On Tuesday, the Planning and Zoning Commission voted unanimously Tuesday in support of outdoor dining, and said it wants “further discussion.”

“So far we have had incredible success with it,” said Commissioner Richard Kleid, who made the motion. “It’s something I’ve wanted to see in Palm Beach for decades and Covid brought it. So let’s embrace it.”

Tuesday’s vote also unanimously called for staff to draft “reasonable regulations” to manage concerns such as noise, parking or traffic impacts, or encroachments into pedestrian or disabled persons’ access on the sidewalks.

Zoning Administrator Paul Castro later said staff will draft those regulations into code language for the zoning board to consider at a future meeting.

The zoning board’s decisions are recommendations to the council, which will have the final say.

Under current rules, restaurants can seek town approval to transfer seats from indoors to outdoors, but they cannot add to overall seating capacity.

Breakers President Paul Leone suggested Tuesday the town allow a modest increase in outdoor seating capacity without requiring the restaurants to give up any indoor seats in exchange.

“If you strip out seats from inside, I think it hurts the ambience inside,” Leone said.

Leone added that, if restaurants could add outdoor seats without having to subtract any indoor seats, they would have the ability to move outdoor guests inside whenever the weather turns ugly, instead of having to turn them away.

In changing the rules, staff and commissioners have to account for possible noise, traffic and parking impacts to residential areas that border the commercial districts where restaurants are allowed.

“How do we control the noise?” Commissioner Richard Pollock asked. “It’s going to impact the neighborhoods. Residents are going to be up in arms.”

Leone said the answer is to start by allowing a modest increase in outdoor seats, and control music and noise levels through enforcement of town ordinances.

Commissioner Jorge Sanchez and alternate Commissioner William Gilbane both cautioned against imposing rules that are too rigid.

“I would favor only loose guidelines so the restaurants can express themselves charmingly and in proper ways without us telling them how to do it,” Sanchez said.

As one alternative, Bergman suggested the town could create a sidewalk cafe permit for outdoor seating that would be reviewed by the town each year.

The commission appeared open to the use of retractable awnings for outdoor seating areas, but not the use of barriers to partition outdoor spaces. Those barriers are typically unattractive and unnecessary in a town as small as Palm Beach, Zoning Chairman Michael Ainslie said.

Residents have sent letters to the council and commission expressing their appetite for an expanded al fresco presence.

In a March 6 letter to the council, Henry and Marie-Josee Kravis wrote, “You sent a note of optimism by letting restaurants serve outside. Seeing people dining on sidewalks and courtyards kept the town alive and created a lively ambience. Our hope is that you will have this continue beyond the necessity brought about by the virus.”