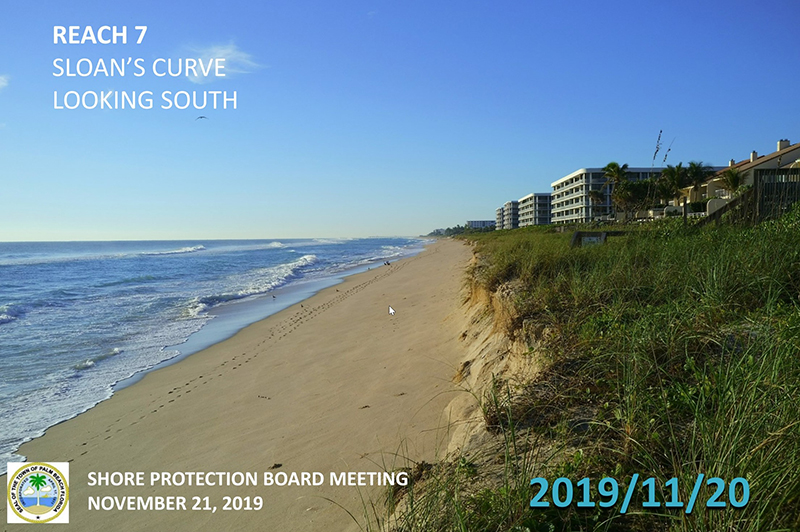 But, with the clock ticking toward sea-turtle nesting season, dune restorations in other areas of town will have to wait until the next beach construction season, meaning Nov. 1 at the earliest, the town said.

Contractor Weeks Marine is expected to mobilize equipment in the Reach 7 area by the end of this week, and begin dredging next week, Public Works Director Paul Brazil said Monday. Reach 7 extends about 1.6 miles from Phipps Ocean Park southward to R.G. Kreusler Park near the Lake Worth Pier.

“I expect you will see activity at Phipps this week,” Brazil said.

The associations representing the buildings at 2000 and 2100 Sloan’s Curve, immediately north of Phipps Ocean Park, agreed not to formally object to the renourishment in exchange for some concessions from the town, Brazil said Monday.

The two condo groups contend the town’s offshore dredging caused severe erosion at their beach the last time Phipps/Reach 7 was renourished in 2016.

State and federal permits do not allow a full beach fill in front of the Sloan’s Curve buildings because of concerns that dredged sand will cover reef and marine habitat in that area.

On Friday, the town agreed to do a sand survey before the beach fill begins and to place “the maximum amount of sand allowed”by the state onto the dunes in front of the Sloan’s Curve condominiums, Brazil said.

The town also will survey the sand volume on the beach in front of the condominiums twice annually, instead of once annually, for the next two years, he said.

“We will return [and] build dunes [at Sloan’s Curve] next year if necessary,” regardless of the source of the erosion, Brazil said.

In an emailed statement Monday, Joseph Goldstein, the Fort Lauderdale attorney representing 2000 and 2100 Sloan’s Curve, said the town “is taking appropriate action to address the increased erosion that occurred as a result of the 2016 dredging … and is taking steps to mitigate that erosion as well as providing necessary monitoring and additional shore protection if needed as a result of the 2021 dredging from the same borrow site.”

The town has been awarded state and federal environmental permits for periodic renourishments at Phipps/Reach 7.

The Florida Department of Environmental Protection, which permits Phipps/Reach 7 under the Palm Beach Island Beach Management Agreement, sent the town and contractor Weeks Marine a notice on Friday to proceed with the work. The town hired Weeks in October to do the job for $8.5 million.

The two Sloan’s Curve groups initially said they were prepared to lodge an objection with the DEP unless the town legally obligated itself to repair, at its cost, any erosion to the Sloan’s Curve beach for the five years following this year’s dredging – regardless of any determination or agreement on the cause.

The town objected that that was unreasonable and would set a bad precedent for future shore protection projects.

On Feb. 9 the Town Council asked that the two sides continue to negotiate.

Had the Sloan’s Curve associations filed an objection to the project, it would have triggered a hearing before an administrative law judge. The town would have to postpone it until next fall/winter because there would not have been enough time to complete it by May 1, when shore construction must stop for sea-turtle nesting season, Coastal Program Manager Rob Weber said.

The objection and hearing also would have jeopardized a $10 million federal grant, awarded by FEMA to reimburse the town for the costs of repairing erosion caused by Hurricane Matthew in 2016, town officials said.

Brazil said Friday the town will be able to use the grant to pay for most of the Phipps project cost, as it had intended.

But it also had budgeted to use the FEMA grant for dune restorations in reaches 3 and 4 (extended Midtown Beach), Reach 8 (south of the Lake Worth Pier) and Reach 9 (South Palm Beach), all of which was to happen this spring.

Plans call for Weeks Marine to dredge about 500,000 cubic yards – enough to do the beach fill and stockpile sand at Phipps for the dune restorations. Another contractor will be hired to haul it by truck to the dune sites in the other reaches, Brazil said.

But with the Phipps/Reach 7 getting a late start – the town had hoped it would begin in January – there won’t be time to get the dune work completed by May 1, so it will have to wait until at least November, Brazil said.

He said there’s a risk the town will lose the portion of the FEMA grant for the dune work.

“Any work that is not done with this [Phipps/Reach 7 fill] event is at risk of not being reimbursed,” Brazil said. “We are working on that now.”