SPECIAL YEAR END EDITION: Civic Association looks back on 2020-21 – a year of uncertainty, adversity and achievement 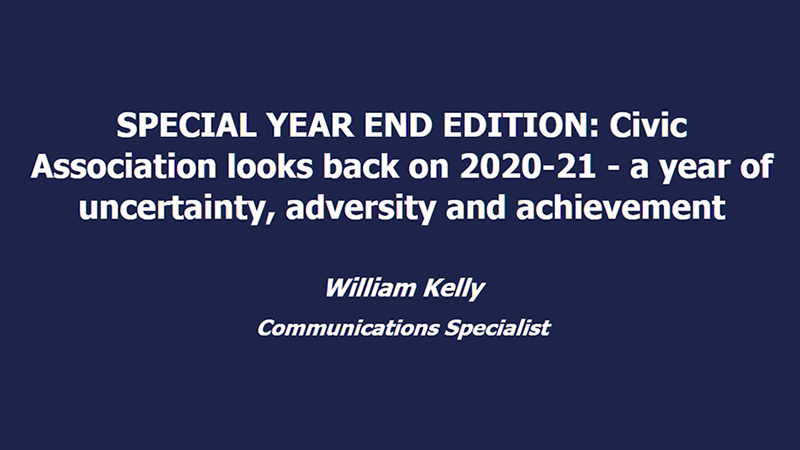 At its Annual Meeting on Friday, the Palm Beach Civic Association will reflect on a year like no other in its 77-year history.

The virtual meeting will mark the end of the Association’s fiscal year on April 30.

It was a year dominated by the unprecedented challenges of the global Covid-19 pandemic. But, for the Civic Association, the year was also defined by a broadened philanthropic outlook, an expanding communications outreach, and realization of membership and fund-raising goals despite trying circumstances.

A year ago, when the full weight of the pandemic began to be felt, CDC safety guidelines were immediately implemented to keep the organization healthy. Events were postponed or cancelled. A remote work policy was adopted for employees, but the seven-member team remained in close contact.

An entire year has passed without any in-person gatherings. All meetings were held through ZOOM.

“Since March 13, 2020 our lives have been greatly changed,” Civic Association President Mary Robosson said. “Yet we’ve managed as an organization through a global pandemic, never hitting the pause button once, to serve our community in civic ways, never seen like before.”

In all, the Association presented 10 virtual events, starting with the Annual Awards Event in November.

“This was a difficult year for everybody,” said Michael Pucillo, vice chairman of the Association’s Executive Committee. “But the Civic Association did a great job of staying involved and staying relevant.”

“It’s been a remarkably good year for the Civic Association,” Ainslie said. “We met our fundraising goals and our membership goals and I think we served the community very well.”

The Association reached beyond town borders and responded to a critical need in the larger community in a way it never had before. Through its Critical Needs Initiative, it raised a total of $430,000 in donations given to the Palm Beach County Food Bank to buy local produce that helped feed families during the Covid-19 crisis.

“It was an example of the Civic Association being able to be quickly involved in a situation in the local area that cried out for some type of help,” Pucillo said. “We were very much out in front.”

Margaret Zeidman, president of the Town Council, said the Association’s swift and decisive response to the pandemic set an example for other organizations to follow. The Association cancelled dinners, luncheons and other public events in the interest of public safety.

“They were the first ones out of the gate on that,” Zeidman said. “That took extraordinary courage. But had they not done that, there would have been a lot more infections in our community.”

Bob Wright, the Civic Association’s CEO and Chairman, said there was a lot of concern about how to continue the organization’s mission and meet fund-raising targets during a year when people would not be physically attending events.

The Association decided to hold its Annual Awards Event – its one fundraising event of the year – virtually on Nov. 19. No one was sure of how people would respond to the virtual format.

Wright contacted Louis Freeh, a former director of the Federal Bureau of Investigation, who agreed to be interviewed by Wright.

The interview followed the presentation of the 2020 William J. “Bill” Brooks Community Service Award to Ira and Nicki Harris.

“Nicki and I have been supporters of the Civic Association for a long time,” Ira Harris said upon receiving the award. “It does such a great job in the community.”

The Annual Award Event turned out to be hugely successful, reaching 120 homes virtually.

“We had a tremendous outpouring of people that wanted to be a part of this event,” Wright said. “We met our goals for fundraising.”

From there, the Association realized it could bring in speakers for other Zoom events, Wright said. The Global Speaker Series II included “The Politics of Migration Featuring Professor Matthew Goodwin of University of Kent with Austin Fragomen” in February and “Our Changing Ocean Featuring Josh Kohut and Oscar Schofield of Rutgers University in March.

The Civic Association’s Healthcare and Public Safety committees joined forces with Palm Beach Fire-Rescue and doctors to produce the three-part virtual forum, “Your Town, Your Safety, Your Well-being.”

The forum educated residents on the importance of wearing a mask, social distancing and other behaviors they could adopt each day to protect themselves and their neighbors from being infected with the Covid-19 virus.

“The Civic Association played an unbelievably important role in helping people to understand what they needed to do and why,” Fire-Rescue Chief Darrel Donatto said. “The Civic Association has always been that body that doesn’t take a political stance on things. They just look out for the best interests of the community.”

Wright said Robosson and Michele Kessler, vice chair of the Executive Committee and head of the Fundraising Committee, displayed strong leadership in guiding the Association across the fund-raising goal line.

“We actually made our budget and more,” he said. “So many people contributed to us because they understood the problem. It just shows you that this town is very special.”

That philanthropic spirit was abundantly evident in the spring of 2020, when the Association’s Save Our Produce initiative was created in response to an urgent need in the larger community.

At the time, everything was shut down because of the pandemic. Robosson saw on the news that growers in western Palm Beach County were plowing under their crops because there were no buyers. Restaurants were closed from late March through April. Cruise ships sat idle off the coasts.

All of this was happening just as the local harvest season was arriving.

At the same time, there was a tremendous outcry for help from people who lost their jobs and were struggling to get by. Food lines were full of people looking to put dinner on their tables – even as local produce was going to waste.

“It was just chaos,” stated Michael Pucillo, Co-chair of the Civic Association’s Critical Needs Initiative Committee. “Mary [Robosson] was the first one to say, ‘We need to get involved and address this.’ A number of Civic Association directors immediately jumped up and were supportive.”

The idea was to find a way to get the food to the people who needed it most. “The Civic Association said, ‘Let’s buy this produce and provide it to the food bank,’” Pucillo said. “So you are getting the food harvested and continuing to keep agricultural workers employed.”

Some of the local growers organized the food collection and purchase effort. The food bank paid $11 for each generously-sized box of sweet corn, zucchini, tomatoes, bell peppers or other fresh produce.

In just three weeks, donors – almost all of whom were Civic Association members – gave more than $200,000 toward the cause, Pucillo said. One anonymous donor wrote a check for $40,000.

With each box weighing around 30 pounds, the total produce provided to those in need through that campaign approached 600,000 pounds.

But that wasn’t the end of it. Last summer, the Association established the Critical Needs Committee, co-chaired by Pucillo and Michael Picotte. Around the turn of the year, the committee learned that a lot of federal money allocated for food purchases would be spent by the end of January.

So a second campaign, Nourish Our Neighbors in Need, raised more than $200,000 in further donations to help the food bank continue buying the local produce.

That campaign resulted in the purchase of 400,000 pounds of produce, according to the food bank.

“You didn’t have crops being plowed under this time,” Pucillo said. “But you did have local produce being distributed through the food bank.”

Zeidman said the Civic Association is always a friend to the town government and the town, but she couldn’t recall a time when it gave so much, so quickly, to help those outside of Palm Beach on such a large scale.

“We have wealthy people here who are unbelievably generous in helping who they can help,” she said.

The Save Our Produce and Nourish Our Neighbors in Need campaigns are over, but the Critical Needs Committee is still intact.

“We got a lot of folks very interested and very involved through that committee,” Pucillo said. “We want to find ways in the future to keep that interest.”

The Annual Meeting starts at 10 a.m. and will be live streamed. You can register in advance on the Civic Association’s website to receive the Zoom link.

Highlights will include Mayor Danielle Moore’s first annual state-of-the-town address. The Association also will honor recipients of its annual Town Beautification Award and the Wright Award for Outstanding Leadership.

The 2021 Annual Meeting will find the organization bidding farewell to another successful year while standing taller than ever before.

Or, as Robosson put it, “Seventy-seven years of civic service and adaptably here for our community.”