Seaweed Invasion Continues on Beaches in Town of Palm Beach 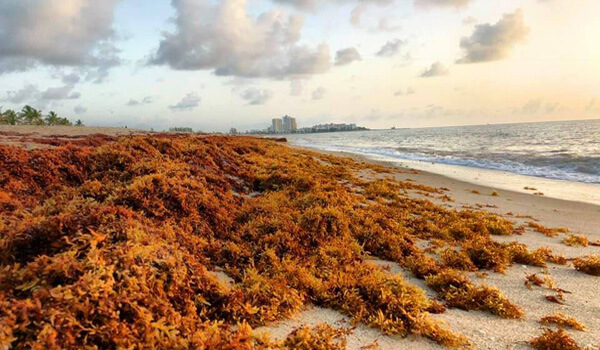 By: R. Michael Brown, Civic Association Communication Director — Across the Caribbean, in the Gulf of Mexico, and along the Florida East Coast, including beaches in Palm Beach, a stinky invasion is happening.

Known as sargassum seaweed, the thick plant has overtaken beaches in South Florida in recent weeks and has lined numerous Caribbean island coastlines for even longer, according to a report from the University of Miami. The seaweed isn’t just smelly – it’s blocking out light for organisms that need it and can mess with the ecosystem, said Dr. Lew Gramer, scientist at the University of Miami Rosenstiel School Cooperative Institute for Marine and Atmospheric Studies.

The seaweed is showing up in places where it was hardly seen before the first sighting in 2011, but these blooms have returned every year since, Science Magazine said. It’s having far-reaching impacts, forcing the government of Barbados to declare an emergency and forcing one of Antigua’s key hotels to close until October, the Antigua News Room reported.

Lessons have been learned since 2011, however. Removal techniques have improved and experts in the islands have written management guidelines. In Barbados, for example, the heavy equipment grabs used to load sugar cane onto trucks have proved good at picking up sargassum without removing sand from beaches.

In the Town of Palm Beach, the shorebreak and weed line hasn’t been overwhelming yet like in Miami Beach.  The policy is to leave most of the seaweed undisturbed on the beach because it’s good for the environment and helps keep sand on the beach. Midtown Beach has a spotted coating of the weed because of the rake-tractor that cleans the beach and buries much of the plants.. On the north end however, a solid 6 to 18 inch thick by 10 to 12 foot wide weedline is at the hightide waterline. Big, wide, 25 to 75 yard long sargassum mats are floating offshore.

As more than 1,000 square miles of the seaweed invade Florida’s beaches, scientists are trying to figure out why these blooms have become such a regular occurrence, but only since 2011. Right now, all they have is “educated speculation,” University of South Florida oceanographer Chuanmin Hu told Science Magazine.

While the smell can be off-putting and the beachings are thick in some areas, experts say the plant is not harmful to humans.

“Evidence suggests that it is actually the result of ‘movement’ from elsewhere, rather than of ‘growth’ in place. Beaching events of sargassum have been reported in the Caribbean, Gulf of Mexico, and Florida over several of the past few years, including 2011-2012, 2014-2015, and now 2018.”

“Prior to 2011, we are not aware of any such region-wide reports of sargassum beaching in the Caribbean. The source of these mass beachings has been a subject of research: One recent study uses satellite data and ocean and wind models to show that these events are the immediate result of sargassum accumulation in the equatorial Atlantic—in particular, in the west, along the border with the southeastern Caribbean.” “Further research suggests, though, that the original mass beaching events in 2011 actually did ultimately come from the Sargasso Sea. They were the result of a large-scale anomaly in the winds over the Atlantic, including the Sargasso Sea, in 2009-2010. These winds pushed the surface waters of the Sargasso Sea in unusual ways, and may have set the table for all of these future mass accumulations in the Caribbean, Gulf of Mexico, Florida, northeastern South America, and western Africa.”

“If sargassum mats accumulate near shore, they can block light from reaching light-dependent organisms attached to the bottom beneath them, including local seagrasses and corals.” “If the sargassum stays, the microorganisms that decompose it will consume oxygen and nutrients from the water, depriving local organisms of those resources. sargassum mats can also serve as ‘life rafts,’ bringing organisms from distant places in the ocean and introducing them to local waters. This has the potential to cause problems with local fish and bottom-dwelling plants and animals. Finally, some research suggests that there are also some potential benefits from sargassum beaching, including the stabilization of beach sand when it decomposes.” “Sargassum is not toxic. As it begins to decompose on beaches, however, along with its inhabitants (small crustaceans, turtles, fish, and other sea life), it may be unpleasant to wade or swim through, or even to be near. Sargassum mats can also accumulate surface-floating debris, which may have its own dangers.”

“If you do wade through accumulated sargassum to swim, do so carefully. Being around decaying sargassum may increase local populations of biting or other nuisance insects as well. And always pay attention to advisories from local, state, and other authorities about potential health hazards when heading out to any beach.”

How long will this last?

“It’s tough to make predictions, especially about the future. However, based on past years’ experiences, we may expect sargassum to continue beaching into 2019. And of course… if past is prolog, it may recur in future years, too.”