If you are living here in the Town of Palm Beach, or visiting in the summer, you’ve seen and likely smelled it, Sargassum seaweed, an ocean algae that, according to one scientist, has been given explosive life by pollution from North and South America.

A Marine Ecology Project by Harvard University scientist George Buckley, the recently retired Assistant Director of the Sustainability and Environmental Management Program at Harvard University, has been shared with the Civic Association. This is one researcher’s theory on a growing threat that has scientists, government leaders, business owners, residents, and tourists troubled throughout the hemisphere (See video above). 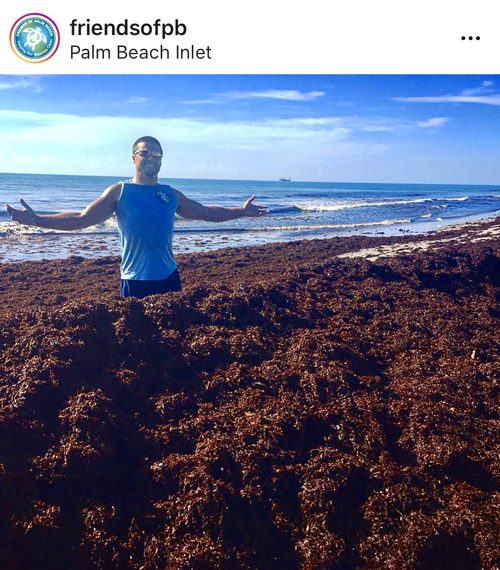 When you stand on the stretch of beach in front of the Palm beach Country Club for a minute, a couple of things can happen… itchy eyes, congestion, and an overwhelming stench similar to rotten eggs.

Stick around and you will likely see tiny turtles, newborns struggling to climb out of the weeds, often not making it off the beach to the ocean.

”Throughout the Caribbean and Gulf of Mexico we are seeing phenomenal blooms like we’ve never seen before,” said Mr. Buckley. “The question is, where does this come from, what causes this?”

Satellite photos show the equatorial currents off of Brazil, coupled with the North Atlantic current, brought sargassum into the Gulf of Mexico and Caribbean Sea where the right conditions, warmer water and pollution, caused the seaweed to literally explode.

“The ocean is about a degree centigrade higher than ever before and pollution worse than ever before,” said Mr. Buckley. “There are nutrients washing out from the entire east coast of South America and from North American into the Gulf.  This great mix, this soup, has created just the right conditions for Sargassum seasweed to take off.”

The result… virtually every island in the Bahamas and Caribbean are inundated by sargassum causing terrible economic and environmental problems. Nutrients from millions of gallons of Amazon and North America runoff are playing a role.

“This discharge from the Mississippi River and the St. Johns River in Florida, the Apalachicola, and the entire southern part of Florida …flowing down from the population in Florida going out into the gulf and Caribbean …a stew of nutrients and sewage products and runoff from farms, from roofs, roads, and lawns, has created this rich nutrient broth,” said Mr. Buckley. “When it washes up on these beaches and windrils it kills everything that’s under it …everything that was in it – also dies.”

“When the sargassum itself dies it creates this fetid awful rotten egg smell.  So this daily cleaning of the beaches is a problem throughout the Caribbean and the Gulf of Mexico.”

The results, dying birds and sea life.  In Bonaire, Caribbean Netherlands there has been a terrible impact on tourism. 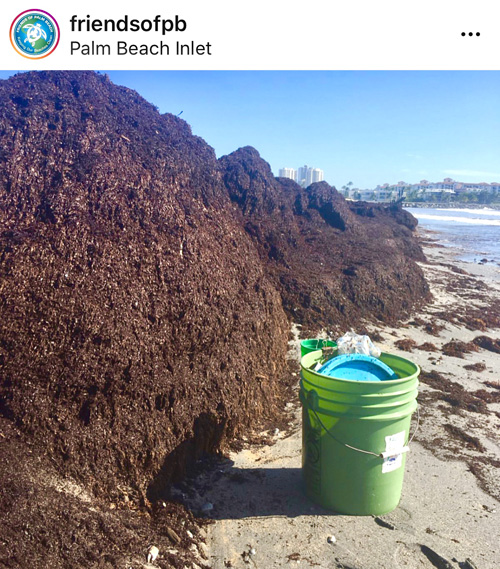 Seaworthy Harvesting machines and barges may be the only way to hold back the sargassum generated by nature and mankind. There is no holding it back and the prognosis is grim.  Researchers say the seaweed may be here to stay – a new normal.

“This may be the worst algae bloom in the history of mankind that we’ve ever seen and its getting worse,” said Mr. Buckley.

Researchers say there is hope but it’s going to take ingenuity and commitment.

“Help fund cleanups, suggested Mr. Buckley. “Help find industrial uses for the sargassum so that this waste product can become a useful product and help to save the economies of the Gulf of Mexico and the Caribbean.”

There are troubling assessments on what it will cost to rid Florida beaches of sagassum. In June, Miami-Dade County officials gave a presentation estimating that removing the seaweed would cost $35 to $45 million a year. The county has roughly 43 miles of coastline, much of which would have to be cleaned up to protect their tourist economy.

Since the end of last week, cleanup crews in South Florida have been targeting areas of the beach with the biggest buildup of the sargassum seaweed. They are using dump trucks and bulldozers to scoop it all up and haul it out of the sand. According to Miami-Dade County officials, crews arrive early in the morning and finish up by roughly 10:30 a.m. before the beach visitors arrive.

Special Thanks to George Buckley, Currently the Director of Sustainability and Environmental Management Project and Hendrik Wuyts, Bonaire Vision Films & Photo International for permission to use their film from Bonaire.

Will our beaches lose their national rankings because of sargassum seaweed?
See More (Daily Commercial)