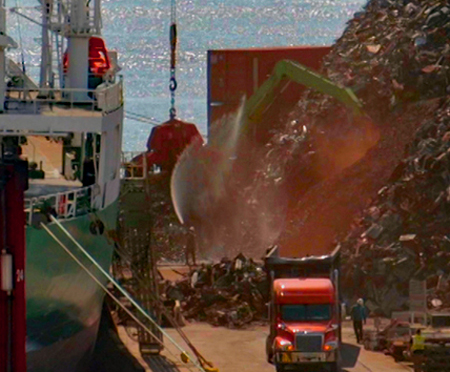 UPDATE 6-7-2019 – By: R. Michael Brown: The Civic Association was filming at the Port of Palm Beach because of the Senator Scott announcement about more security funding for ports in Florida when we saw work being done on the scrap metal pile.  The cloud of dangerous metal dust was being hosed down as the backhoe and claw loaded the scrap onto the ship.

Residents of Palm Beach and Riviera Beach have complained about what they describe as an unsightly pile of scrap metal operating out of the Port of Palm Beach.

They have expressed concerns about the danger of the scrap blowing around during a hurricane and chemicals from the rusting metal flowing into the Lake Worth Lagoon.

Robert Holuba is a Civic Association director and chairman of the Port of Palm Beach/Peanut Island Committee. He took a video from his boat November, 2018 that showed the scrap pile reaching incredible height and bulk (See video above). 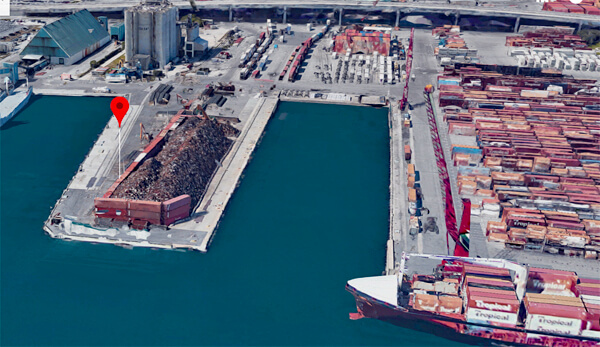 “The current overriding commitment from the top of Florida’s [government] to the local community is clean water,” Mr. Holuba said. “It’s inexplainable, with Florida being a water state and it’s economy revolving around water, why a public entity like the Port of Palm Beach would take on a long-term tenancy that puts our clean water in jeopardy. A grade schooler could look at this and say, ‘This isn’t the place to put rusting iron.’” 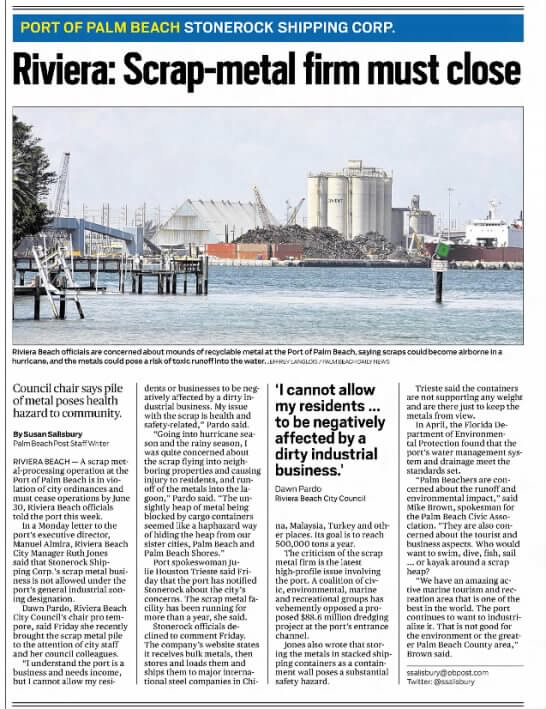 Karen Hoskins, city manager of Riviera Beach, has confirmed that Stonerock Shipping Corp. is operating its scrap metal exporting business out of the Port of Palm Beach without a license from the city.  The company has a business license for office space it occupies on the west side of the port, but it has not applied for a license for where they are stacking the scrap metal, Ms. Hoskins said.

“The City of Riviera Beach is committed to supporting business growth and development throughout our community,” Hoskins said. “We will continue to work with the Port of Palm Beach and their tenants to ensure that all local regulations are satisfied.”

Attorney Tom Long, who represents Stonerock, said they are “talking with the city” to try and resolve any issues. Mr. Long said Stonerock has applied and paid for a license, but it has not been granted by the city.

“The port is our landlord and we want to be good citizens for the port and the city,” Mr. Long said.

Manuel Almira, executive director of the port, said they signed the first contract with Stonerock on Oct. 1, 2012. The initial contract is for 10 years. The contract can be renewed up to 3 additional times at 10 years each, for a total of up to 40 years.

Mr. Almira said that Stonerock has “followed the law to the “T” regarding applying and meeting all the requirements for the license.

“They only handle the material, receive the material and load it onto a ship that goes to international markets,” Mr. Almira said. “The city has mentioned, falsely, that the scrap is being shredded on port property. The answer to that is ‘absolutely not.’ There’s no shredding. There’s no processing. There’s no cutting. All they do is receive it, load it and off it goes. Stonerock does absolutely everything that is asked of them.”

Port of Palm Beach Commissioner Katherine Waldron listed three concerns that she’s heard from the community regarding the scrap pile.

“One issue is the concern regarding what the scrap pile looks like, even though it is surrounded by container boxes,” Ms. Waldron said. “Then there’s the safety issue. I’ve been told it’s very safe, but I have a business in the panhandle that had a hurricane five come through, so I wouldn’t stake my life on that. And then there’s the environmental issue – the runoff. They’re saying it doesn’t go into the water, but sometimes those things don’t always work out if you have a ton of rain. I think there’s always going to be controversy around a scrap metal pile near residential communities.” 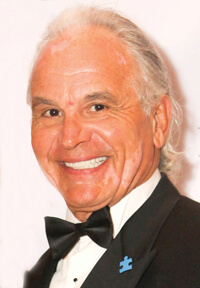 Mr. Holuba added, “Our elected officials at the Port of Palm Beach – the five commissioners – their duty is being stewards of the lagoon water. For them to put cash flow before clean water, their decision making and their priorities are misaligned. This isn’t about cash flow. This is about preservation of Florida and its water quality.”