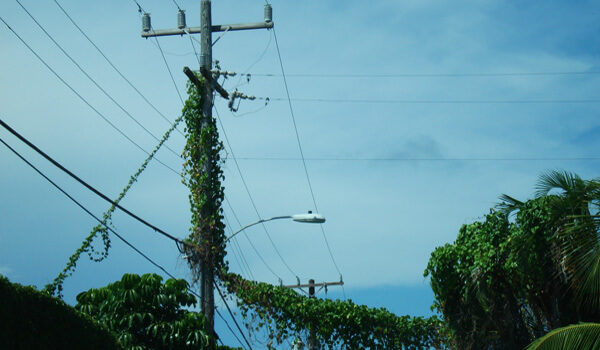 By Michele Dargan, Special for the Civic Association – The results of the 44-page peer review for the $98.6 million undergrounding project was presented at the Dec. 12 Town Council meeting and offered four suggested improvements to the project.

The suggested improvements are: implementing a project management plan, executing a continuing contract, preparing a detailed cost estimate for the entire project and upgrading switchgear selection where possible.

The Palm Beach Civic Association paid $50,000 of the $100,000 cost to undertake the peer review. One of the goals of the review was to try and find ways to save time and money on the project.

Before getting into the results of the peer review, Councilwoman Bobbie Lindsay expressed concern about the number of gas line breaks that have occurred in the north end due to the project.

Town Engineer Patricia Strayer said there have been six gas line hits to date. Four have been smaller service lines and two have been the larger main lines.

“The gas company (Florida Public Utilities) is responsible for locating their lines and identifying them in the field for the contractor before we do our digs,” Ms. Strayer said. “They’re not doing a great job on that … We have put FPU on notice they need to do a better job at locating their gas lines and services.”

Mayor Gail Coniglio said, “FPU has been touting to us they were giving us accurate maps and better scenarios as to where their pipes are. To bear this for however many number of years is painful and to me it’s unacceptable.”

Anthony Hanson presented the peer review findings and answered questions during the meeting. Mr. Hanson is the principal engineer with Patterson and Dewar Engineers, the company that conducted the review.

The peer review examined the project’s approach and design, the master plan, scheduling, sequencing, phasing, the probable cost of construction, and the overall plan for executing the project.

“The complexity of the project scope with multiple utilities involved is a very difficult task and we understand that process,” Mr. Hanson said. “We hope our review will identify things that will be beneficial to you.”

Chris Ekrut, from NewGen Strategies, part of the project team, spoke about the four major suggestions the team outlined in the report.

Mr. Ekrut said the town should develop a formal project management plan, which defines roles and responsibilities for the project and who is responsible for certain issues.

“We’ve heard a lot of conversation today about hitting gas mains,” Mr. Ekrut said. “An element that the project management would cover is communication. When a main is hit, what is the process? Who should be notified in what order? Who is ultimately responsible?”

The second recommendation is to use one large contract with advantage to cost and scheduling to eliminate the start/stop process.

“One of problems is that it does impact the town and you will have more people working in more areas,” he said.

The third recommendation is to prepare cost estimates for future phases of the entire project. It wasn’t done this way, in part, because of the lack of schematic drawings given to them by FPL.

The fourth recommendation is to continue to vet the FPL design and confirm the cost difference. There have been a lot of questions regarding use and cost of upgraded Vista switchgears instead of the regular PME switchgears.

“The master plan developed by KHA is very thorough, and the data and drawings we received were invaluable to our review,” the peer review states on page 44. “Further, we appreciate the cooperation of all stakeholders who participated in our consultations and proffered constructive feedback on the project.”

In a Dec. 8 memo, Mr. Stern outlined staff answers to the peer recommendations.

Kevin Schanen, from Kimley-Horn, said they’ve tried to get FPL to waiver from $50,000 per switch price difference for Vista versus PME.

“We have had conversations with FPL and have not been able get the costs lower,” Mr. Schanen said. “The more Vistas we use will drive up the cost from FPL.”

Much of the conversation and questions centered on whether to use more Vista switchgears.
Tom Parker, a member of the town’s Underground Utilities Task Force (UTF), said he sees the report as an affirmation of the good work that the staff, the town, Town Manager Tom Bradford and the UTF has done in guiding the process.

“FPL is bound to keep the system operating,” Mr. Parker said. “There is no reason for us to make it as expensive as possible before handing it over to them.”

Councilwoman Julie Araskog said she thinks some neighborhoods would prefer the Vista switches, particularly in a flood.

Mr. Schanen said, “In a storm situation to protect their grid, FPL will shut parts of the grid down. The type of gear you have doesn’t prevent you being out during a major hurricane. From a reliability standpoint, from day to day, you won’t know if served by Vista or standard gear.”

UTF member and Civic Association Director Susan Gary said she strongly recommends that the town implement the recommendations from the peer review.

“I cannot support the continuance of the program unless these items addressed in the peer review gets resolved,” she said. “It will not be a waste of money to get a (detailed) cost estimate. You cannot do a cost estimate for this project in phases.”

Mr. Hanson said most of the time with a project like this, they get the maps for a detailed long-term estimate. In this case, FPL hasn’t given them the documents to do this.  “The exact drawing of the system is unknown,” he said.