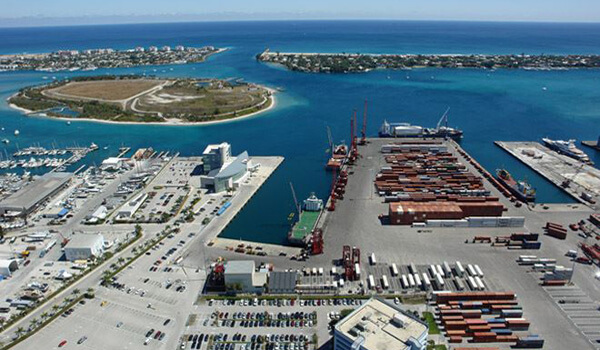 The Port of Palm Beach Commission met Thursday to discuss cutting off the southern end of Peanut Island to make the Port’s turning basin bigger – and allow larger ships to navigate into the Port docks.

Objections were raised by the Save Our Inlet Coalition; Lisa Interlandi, an Everglades Law Center attorney; the Palm Beach Civic Association; environmentalists, and others.

Environmentalist Jim Barry told Port of Palm Beach Commissioners that cutting off a 10-foot portion of Peanut Island, known as Area D, would have multiple negative environmental effects. Among them: erosion, destruction of sea grass, turbidity and the possibility of an underlying reef.

Lisa Interlandi, attorney for the Everglades Law Center, said they raised these issues four years ago and none of these issues have been addressed or analyzed. She also urged that they not use an environmental impact statement from four years ago, because it is outdated.

Executive Director Manuel Almira said the two cruise ships have difficulty navigating into and out of the narrow channel and it is a safety concern.

The Grand Celebration has enhanced navigation; while the second ship, Grand Classica – a larger vessel, does not and it’s more difficult for that ship to navigate in and out of the port, he said. “If we could cut back 10 feet, it would alleviate some of this pressure coming out and coming back in,” Mr. Almira said. Mr. Almira said they don’t have any grant money yet for this project.

Chairwoman Jean Enright said, “We’re one day going to have a major accident and that’s what I’m concerned about.”

But Ned Barnes, president of the Palm Beach Civic Association, said that is exactly what many nearby residents, including Palm Beachers, don’t want — the Port of Palm Beach turning into a commercial port.

“They don’t want to see this become a major center of commerce,” Barnes said.

Barnes said there are many Palm Beach residents — divers, fishers and environmentalists — who live nearby and who oppose expanding the port.

“It’s a big recreational, tourist and residential area,” Barnes said. “There’s a concern about having an industry right next to that.”