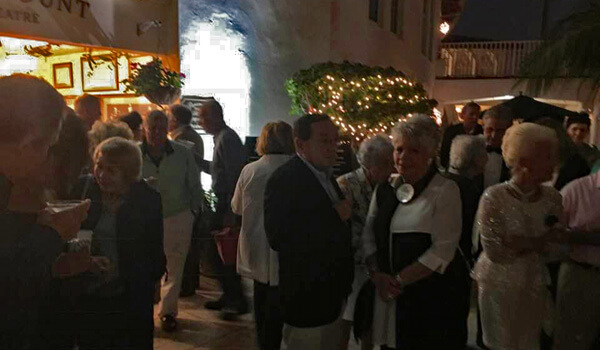 What a fabulous evening at the 90th anniversary of the historic Paramount Theatre building in Palm Beach.

“It was a smashing success,” said Maurice Amiel, owner of The French Wine Merchant. “What a wonderful time despite the rain!”

Mr. Amiel held a wine tasting during the event and Dwight Stevens, Senior Pastor and Founder of The Paramount Church, held the event and provided the music.

Civic Association offices are located in the Paramount Theatre building on the second floor (what used to be the balcony of the old theater).

The Paramount Theatre opened on January 9, 1927 with the showing of the silent film “Beau Geste,” starring Ronald Colman, complete with 16-piece orchestra and Emil Velasco at the organ.

Open only from the end of December through the first part of April, the theater attracted the wealthiest of Palm Beach’s residents and visitors, showing first run movies, generally only for a two-day or three-day engagement.

Hollywood’s box office stars graced the silver screen at the Paramount from 1927 until 1980. Silent films played until 1928 when “Talkies” began.

The Paramount Theatre closed as a movie theatre May 31, 1980 with the showing of “Coal Miner’s Daughter.”

The building was transformed into a church and offices and landmarked in 1973. Read more about the history: