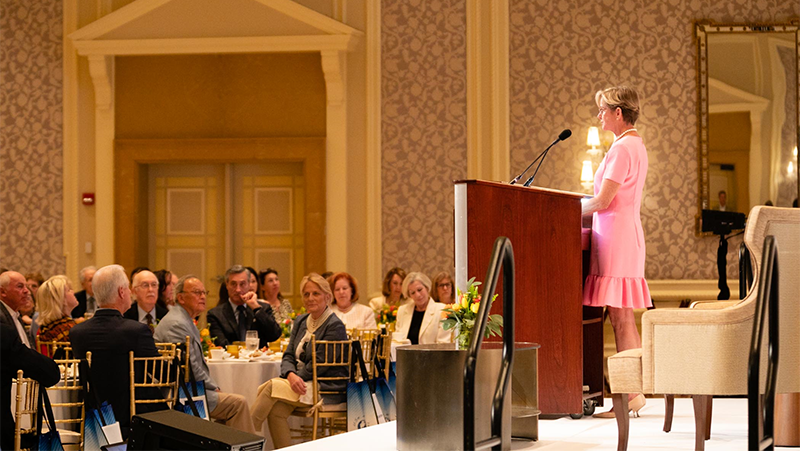 Coniglio is a former mayor and Town Council member who is now chairwoman of the Planning and Zoning Commission.

She was awarded the Brooks Award at the Civic Association’s Annual Award Event on Feb. 28 at The Breakers.

Coniglio retired as mayor in 2021. During her 10-year tenure, the town made great strides in shore protection and with the burial of overhead utilities, Civic Association President Mary Robosson said. Coniglio also presided over the town’s centennial celebration in 2011 and the opening of the Morton and Barbara Mandel Recreation Center in 2019.

Under her watch, the town secured millions of dollars in federal aid for the ongoing renourishment of its beaches and streamlined the state environmental permitting process through the creation of the Palm Beach Island Beach Management Agreement, Civic Association Vice Chairman Michael Pucillo said.

“That is just one example of the profound effect Gail has had on this town that will be felt for many generations,” said Pucillo, who worked beside Coniglio when Pucillo was a member and president of the council.

Coniglio told the audience of roughly 300 civic association members, directors and guests that she was grateful for, and humbled by, the recognition.

“To join the company of the awardees of the past and especially Bill Brooks is truly an honor,” she said. “Today is yet another day where I am both blessed and proud to be a Palm Beacher.”

The Brooks award is given each year to a person who has significantly improved the quality of life in the local community, Robosson said. It is named for the late Palm Beach council member and longtime general manager of WPTV Channel 5, who died in 2010.

Coniglio said Palm Beach is a better place because of Brooks’ dedication to the town. “He stood larger than life and planted deep roots in our community,” she said.

Bob Wright, chairman and CEO of the Civic Association, reflected on Coniglio’s last 11 years of town service, including her 10 years as mayor and subsequent appointment by the council to the Planning and Zoning Commission. Coniglio was chosen by her fellow commissioners as chairwoman of the commission, which is reviewing the zoning code.

“Gail has been a star for all of that time,” Wright said. “She was excellent on the Town Council and great as a mayor and she has subsequently taken on a lot of other issues in town. You can’t ask anyone to do anymore.”