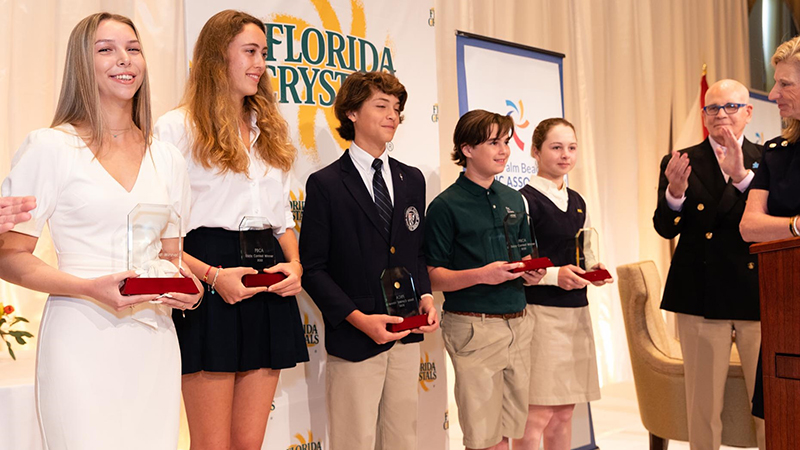 At our Annual Awards Breakfast and “Monday Sitdown” with Willie Geist, the Palm Beach Civic Association awarded five local students for winning an essay contest. The students, ranging from 8th grade to college senior, wrote about what it means to be civic-minded.

There are many different ways to be considered a good citizen or a civic-minded person. One part of being a good citizen is helping your community. Examples of that could be volunteering for a food bank, helping do a trash clean-up on the beach or even donating clothes, food, and even water to people in need of that. Another part of being a good citizen is getting along with your fellow citizens. Just simple as inviting a neighbor over to dinner, going to the town hall for Christmas, and just anything you can think of to be nice and friendly.

The final and most important part of being a good citizen is using your voice. Examples include joining a committee, starting a committee or petition, don’t be scared to say something. Most importantly, though, the best citizens vote. Now, most people are sometimes too lazy to vote. They may not feel like it, have something that day, or may not think their votes matter. Well, think again because all voices do matter. There are still so few people voting in counties for positions.

A good citizen shouldn’t be lazy, mean, or careless. They should want to volunteer, be friendly, and use their voice. A good citizen isn’t hard to be, so we should be one.

To be civic-minded is not a hard task; all it takes is respecting authority, volunteering to better the community, and doing your part to maintain a fair and just society. A civic-minded individual must have an inherent respect for democracy and appreciate the privilege to live in a society that protects the civil liberties of all. As a fourteen-year-old student, I live out this principle by doing my part to advocate for marginalized people in my community. Working with volunteer outreach programs for the betterment of others affords me the opportunity to actively engage in my community. In my experience, volunteering means selflessly giving and can be a small or large gesture. Donating my time to beach cleanups, United Way food drives, and other initiatives have ignited a passion within me and reinforced the lesson that giving is far better than receiving. Civic-minded people have an obligation to do their part to help society remain fair and just. As an adult, it will be my civic duty to serve on a jury to make sure that the rights of others are respected universally and to vote to ensure that I elect those whom I feel will best represent my values and interests. At Rosarian Academy, I serve as Student Council President and model the importance of being active in the community. My primary purpose as president is to advocate for the best interests of my school and its students. Demonstrating civic-mindedness within the school and community at large is both an honor and a privilege.

While the attributes that make up an exemplary citizen are subject to opinion, certain qualities cannot be denied. Even though I am only fourteen years old, I have met many different types of people in my life. I have met people of different races, cultures, and religions, and have even gotten to know many people that are considered “heroes” in society. But I have also met people that have made me doubt the goodness of their heart. I feel that an exemplary citizen should show sympathy and empathy for other people in trying times as well as display a sense of admiration for people. They also must participate in their community and be willing to take time out of their day to benefit the greater good; they must be selfless. The saying, “All for one and one for all,” has resonated with me in the way that people must band together to make the world the best place it can be. We must curtail the journey of evil and put joy on its route. And hardworking and kind citizens are stopping the path of evil to promote a sense of admiration for one another in communities. Participating in events, recognizing problems, and creating solutions to those problems, a civicminded citizen should inspire others to join in the efforts. Without many small voices coming together, there would be no large voice advocating for change. And a society without change would result in an under-developed society. To keep progressing through time in an aware manner, the use of one’s power and voice for the betterment of the planet is crucial. Most importantly, when we listen to others and speak with one another, we must never allow one’s race, religion, or culture to come in the way of human connection. A civic-minded citizen should recognize the value in each individual and appreciate them for who they are. Each individual’s value in society is undeniable and today, I encourage people to help someone in their community and to treat others how they would want to be treated.

Certain obligations come with the right of citizenship; and in order to preserve and build this country, every citizen has duties that must be fulfilled. With the current social and political climate, people often try to put their own values above those of others; we have divided ourselves into different groups when, to bring change and progress, we must band together and become good people together. A good citizen and civicminded person looks beyond boundaries and does what should be done for the greater good.

On the topic of journalism and as an aspiring journalism major, I turn to my local news anchors as a perfect example of this. They are active members of our community; the ones we turn to when we are in need of information, who create and cover food drives and fundraisers, provide us with entertainment, and inspire kids within the community to follow in their footsteps. These journalists have a commitment to the community providing us with trusted information and to focus on local issues to educate us about what is happening in our community; through this, they bind our community together.

If someone asked me two years ago what behaviors I believed were emblematic of good citizenship—the unspoken interpersonal responsibilities synonymous with patriotism—I would have jumped to reiterate the importance of advocating for moral clarity in society. Grappling with a worsening pandemic while lists of victims to social injustice became household names, members of my generation assumed the responsibility of deciding what would now be orthodox in matters of public opinion. While this may be a prima facie example of wholesome conduct, the ideological warfare that subsequently ensued perpetuated the notion that truth and fidelity could be so easily embodied by sign crafters and street liners. In trying to advance, we collectively submitted to the fallacy that moral rightness is degreed and correlated with our proactive steps to enforce it, virtually or elsewhere.

Today, as both a journalist and a human being in the infancy of her adulthood, I can’t help but feel pitted by the polarization we’ve normalized, overvaluing our experiential knowledge and regarding every act of dissension as an irreparable difference. We have forgotten that the prerequisite to change is empathy, and this should voluntarily exclude no one. I can now thoughtfully and carefully confirm that an ideal citizen is one whose universe of obligation includes those who fall outside the bounds of their predispositions and affiliations. They remember that servitude is not selective and only amounts to a zero-sum game when it is.