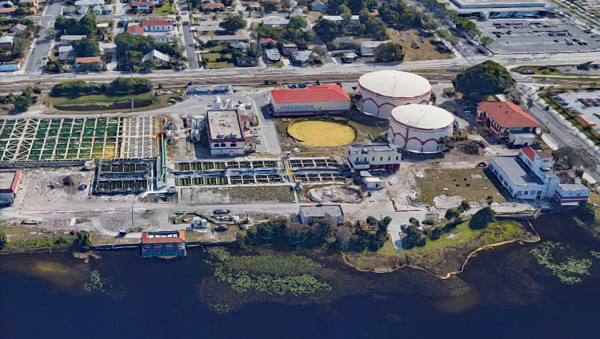 The City of West Palm Beach’s cyanotoxin expert panel isn’t expected to reach its final findings and recommendations until sometime next year.

The city, meanwhile, is strengthening processes at its water treatment plant to protect its drinking water supply from cyanobacteria contamination, a Palm Beach engineer said earlier this week.

Debrincat and John Potts, senior utilities engineer with town consultant Kimley-Horn & Associates, have been appointed by the town to observe the panel’s meetings. The twice-monthly work sessions began in July and, with one exception, have not been open to the public.

Mayor Keith James convened the board after the May outbreak of cylindrospermopsin, a cyanotoxin produced by blue-green algae. The outbreak triggered a May 28-June 4 city water advisory for 120,000 residents in West Palm Beach, Palm Beach and South Palm Beach. The city has stepped up testing of its water supply and is sharing the results with the town, Palm Beach Public Works Director Paul Brazil has said.

The city has given the panel of scientists and water specialists a year to reach its findings and make a recommendation.

Situated at Clear Lake, the city’s water treatment plant uses a conventional lime-softening process with ultraviolet light introduced in 2019 for additional disinfection. Ultraviolet light acts as an oxidant to increase destruction of the cyanobacteria cell walls.

The city has added a powder-activated carbon system that enhances the taste of the treated water with the added benefit of removing extracellular bacteria, Debrincat said.

The plant also has deployed a chlorination treatment that follows the water’s exposure to ultraviolet light. “Chlorination kills the toxin but does not remove it completely,” he said.

There are multiple points where cyanobacteria can enter the city’s water source, Debrincat said. The panel is trying to understand how water from these sources reaches the plant’s intake point at Clear Lake.

Conventional water treatment, consisting of coagulation, sedimentation, filtration and chlorination, can generally remove cyanobacteria cells and low levels of cyanotoxins that can be released from those cells. But conventional systems can be stressed to meet safety guidelines during a severe bloom event, like the one in May, when there are high levels of cyanobacteria and cyanotoxins in drinking water sources.

Advanced treatment options for cylindrospermopsin control eyed by the panel for the long term include the use of ozone, granular activated carbon, advanced oxidation, reverse osmosis and nanofiltration membranes, Debrincat said.

The group of experts must weigh the costs and feasibility of deploying these options along with the benefits and drawbacks of their use. “The panel looks at what could be added and what are the future treatment options at this point,” he said.

The town is not trying to influence the panel’s decisions or steer it toward any conclusion, Debrincat said.

“Let the data drive the end result,” he said.

Potts told the Town Council in August that the city water panel is reviewing data from an expansive area that includes more than 80 testing locations. He said the panel hopes the information will help water managers predict when an algal infestation is about to occur.

Potts, in addition to observing the water panel’s work, has said he offers his own perspective and insights at its meetings.

Potts also has been tasked by the town with examining and interpreting the complex water testing data, Brazil said.