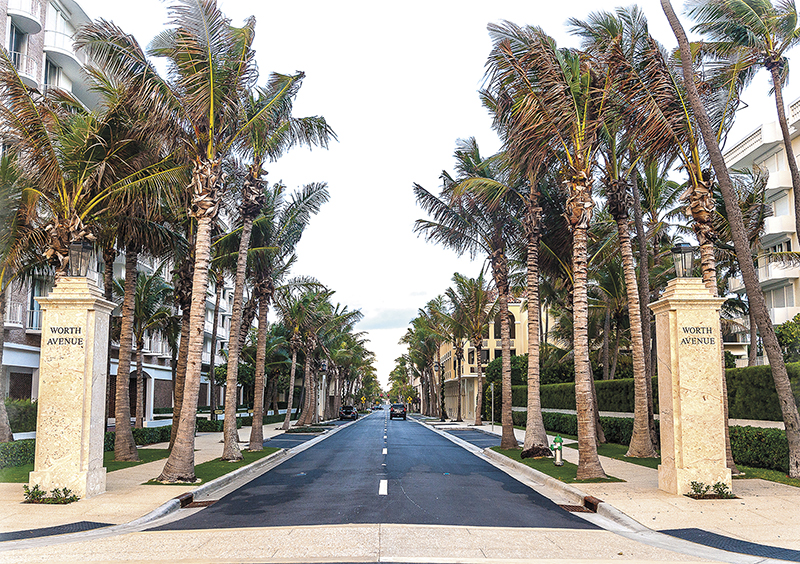 Paid parking coming to ocean block of Worth Avenue; other blocks could be next

The ocean block of Worth Avenue will soon be converted to paid parking – a move that could signal the eventual end of free parking for the remainder of the world-class shopping district.

In July, the Town Council approved a conversion to paid parking in the avenue’s ocean block to discourage Midtown Beach visitors from taking spaces intended for customers.

The change will be consistent with parking policy on the town’s other ocean blocks, Deputy Town Manager Jay Boodheshwar said. It should take effect by the end of the month.

Motorists will pay using a ParkMobile app on their cell phones or by using a kiosk on South County Road. A kiosk will not be installed on Worth Avenue, Boodheshwar said.

To accommodate quick-stop shopping, four spaces will be set aside for free parking with a 30-minute limit. They’ll be clustered on the north side of the street near the former Neiman Marcus site.

There are 132 spaces on the avenue. Parking is currently free with a 2-hour time limit.

Worth Avenue merchants have long resisted the idea of paid parking on the street. In 2019, shop owners and managers organized an email campaign to halt town plans to convert the entire avenue to $4-an-hour parking, which they contend would be bad for business.

Town officials have said paid parking is needed to encourage parking turnover and reduce congestion and to discourage store employees and beachgoers from taking spaces.

“This is somewhat of an incremental move,” Boodheshwar told the council’s Business and Administration Committee on Thursday. “If it makes more sense for the general good to move further west with these blocks, to implement paid parking, we’ll revisit that in the future.”

The two-member advisory committee is made up of its chairman, Lew Crampton, and Bobbie Lindsay. Its decisions are recommendations to the full council.

The question of whether to expand paid parking across the remainder of Worth Avenue was tied to a discussion about introducing a centralized valet service to serve the avenue and other business districts. A 2020 pilot program for valet service on the middle (200) block of the avenue proved to be popular, Crampton said.

The town is looking to hire a valet service to reduce parking congestion on the avenue. During the busy winter shopping season, Lindsay said, drivers will often circle a block three or four times while searching for a space they want.

A recent town request for proposals from valet operations initially yielded interest from 19 companies, Boodheshwar said. But none of them ultimately submitted a proposal. Staff asked them why.

Boodheshwar said the companies generally didn’t feel there was enough of a profit margin to make the venture worthwhile.
One firm said the start-up costs of up to $20,000 would be a risky investment for a short-term contract that could be cancelled at the town’s convenience, according to Boodheshwar.

The company said the town would need to subsidize the operation and that sufficient and dedicated parking spaces would have to be provided.

Boodheshwar said it’s more difficult for a valet operation to succeed when it is competing against free parking.
“People are going to seek out the free spaces first,” he said.

Crampton and Lindsay both said they are open to subsidizing a valet service if that would make the operation work. Crampton suggested pulling $20,000 from the town’s Building Enterprise Fund.

“Maybe we need to make a modest investment,” Lindsay agreed. “It is a premier street. To have it so abused by beachgoers and employees … there has got to be a solution here.”

Boodheshwar suggested converting all parking spaces on the avenue to paid parking with the first 30 minutes free. “The employees won’t want to move their cars every 30 minutes,” he said.

Parking would be paid through the ParkMobile phone app instead of kiosks and would be introduced alongside valet parking, he said.

“I agree,” Lindsay said. “This is probably where we have to head. The demand [to shop on the avenue] is so high you’re going to ultimately have to charge something.”

Boodheshwar suggested submitting a new request for proposals that would give the valet companies more freedom to design the plans, which could be evaluated by the council.

“Maybe the approach is to let the vendors try to solve the problem,” Boodheshwar said.

He said staff will return to the committee at its meeting next month with a more detailed plan to solicit valet proposals.

Lindsay and Crampton both said some type of valet service is needed on the avenue this winter.

Worth Avenue had a busy season last winter, Lindsay said. With the new Town Marina opening in November, the coming season should be even bigger.