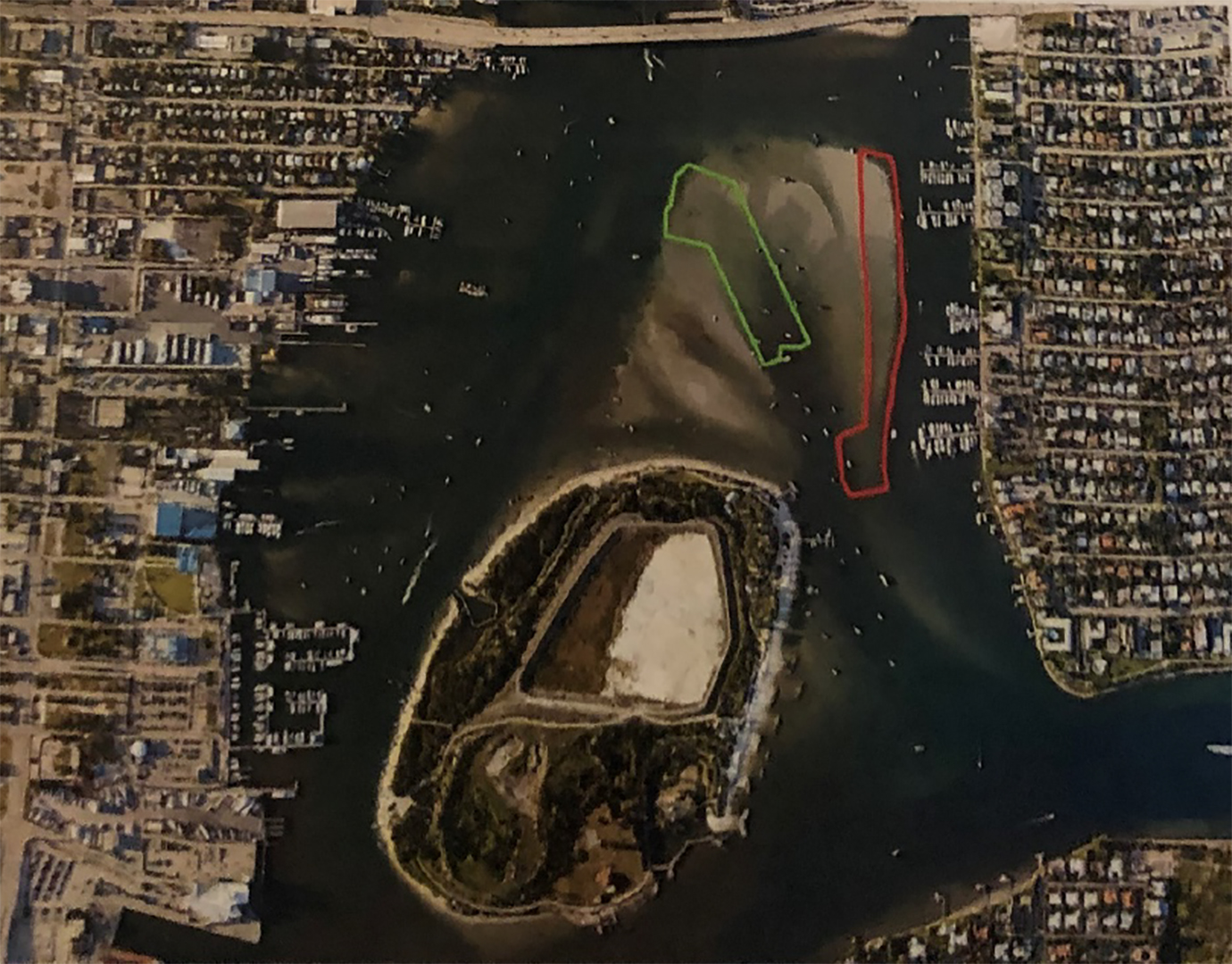 A proposal to dredge sand from two areas near Peanut Island has touched off concerns about possible public safety and environmental consequences at one of the sites.

The plan calls for removing sand from the heavily shoaled channel immediately west of the Sailfish Marina in Palm Beach Shores and from a diagonal cut through the sandbar north of Peanut Island.

The Marine Industries Association is pushing for the project, estimated to cost around $5 million, to improve navigation. It has secured Palm Beach Shores as its governmental sponsor to apply for a grant from the Florida Inland Navigation District, which funds up to 75 percent of public navigation projects.

The Florida Department of Environmental Protection has issued an environmental permit for the work. A U.S. Army Corps of Engineers permit is pending while the Corps awaits opinion from its advisory agencies. The Corps’ 30-day public comment period is over.

Mayor Danielle Moore reported on the meeting during her remarks at Tuesday’s Town Council meeting.

“Concerns were expressed to Mayor Fiers about increased safety risk to swimmers who normally use the sandbar with new boat traffic cutting through that area, as well as the steep drop off that will exist after the diagonal channel is dredged,” Moore said.

Questions were also raised about the removal of seagrass in the dredge area and lack of viable options in the lagoon for new seagrass to mitigate for the loss, Moore said.

Barry said Thursday the diagonal cut would be detrimental to diverse seagrasses that grow in and around the Port of Palm Beach inlet, where there is good water quality and sunlight penetration.

Mitigation efforts to replace those seagrasses elsewhere in the lagoon are unlikely to duplicate that diversity, he said. Seagrass mitigation is challenging in the Lake Worth Lagoon because of the sparsity of locations where conditions are right for it to seed and grow. The depth generally needs to be around three feet – shallow enough for sunlight penetration and photosynthesis to occur, but too shallow for boat traffic. The water quality also must be right.

Depending on the type of dredge process used, there also is the potential for turbidity that would do further damage to adjacent seagrasses, he said.

Seagrasses provide food and shelter for many marine organisms and animals, including manatees, and stabilize sediments and prevent erosion along the coastline. Many manatees are starving to death in state waters because of the loss of seagrasses.

Barry said he’s also concerned that the sandbar cut-through would pose a threat to public safety because of the steep slope it would create adjacent to a shallow area where boaters and swimmers congregate.

“You create a situation where a child or a non-swimmer wades out and the next thing they know they are in water over their head and the current is pushing them,” he said. “People will be flying through there with their boats and potentially hitting people.”

There are also questions about where the dredge material will be deposited. One potential site is a pit in the Lake Worth Lagoon about three miles north of Peanut Island. But Moore said there is only room there for about 25,000 cubic yards of sand – a fraction of the 116,000 cubic yards anticipated to be dredged.

The Town Council has not taken a position on the overall proposal. But the town administration has rejected the suggestion that excess dredge material be deposited in waters south of the inlet and near the town shore.

“We advised Mayor Fiers that we would not be interested in the sand and expressed concerns about turbidity impacts to seagrass and dive areas,” said Deputy Town Manager Jay Boodheshwar, who represented the town at the Oct. 7 meeting along with Coastal Program Manager Rob Weber.

Fiers said Palm Beach County ERM was originally interested in the dredging in hopes it would improve the flow and quality of water in the lagoon. But a study by Cummins Cederberg, an engineering consultant specializing in marine and coastal environments, found that the proposal would not improve the water quality. The county ERM then stepped back from the project, he said.

But Palm Beach Shores and the Marine Industries Association remain interested because of the navigational benefits. The Palm Beach Shores commission voted in August to be the government sponsor, which paves the way to apply for a FIND grant if the project receives an environmental permit from the Army Corps of Engineers.

Palm Beach Shores supports the proposal because of the need to dredge the “east channel,” which is the channel that runs just west of the Sailfish Marina and two other marinas, he said. The channel falls within Palm Beach Shores’ territorial limits.

It is a natural channel that has built up with sediment since Peanut Island was created by dredge-related projects in 1918 and Phil Foster Park was established in 1953, Fiers said.

“For us, it’s strictly about the navigation capability of the east channel,” he said. “It has filled in to where it’s very narrow and difficult for two ships to pass at the same time. When low tide comes in, some ships are having trouble getting in and out.”

Asked about the environmental and public safety concerns, Fiers said, “We don’t have a position on it.”

Ray Graziotto, vice president of the board of directors for the Marine Industries Association, said the organization has invested $150,000, equally sharing the permitting costs with Palm Beach County ERM.

“ERM came to us,” he said. “This was their design and project and we are just a helpful funder and advocate.”

The association believes the dredging would be beneficial to navigation and safety, Graziotto said. Easing the movement of water traffic through the channel and diagonal cut will result in less congestion which should create safer conditions, he said.

“It would improve the water flows and allow the sediment not to drop where it’s been dropping,” he said. “Should we be concerned about the loss of seagrass? Yes. But there are times when seagrass has to be mitigated for.”

If the proposal were environmentally harmful, the county Environmental Resources Management, Florida Department of Environmental Protection and the other regulatory agencies would not approve it, he said.

“It’s a five-year [review] process that is rigorous and that is very much taken seriously by the agencies, including ERM, whose job it is to protect Palm Beach County,” Graziotto said.

Fiers said that, for now, they are waiting for the Army Corps permit and defining where the dredged material can be deposited.

“Once we do that, we’ll know what type of dredging we can do, hydraulic or mechanical, and that will define the cost of the project,” he said.

If approved, the dredging would occur sometime in 2023 and take about four months to complete, he said.

In the meantime, Fiers said he is mindful of the conflicting positions over the impacts of the diagonal cut.

“Before we go forward, we need to resolve that,” he said. “That is where we are right now.”