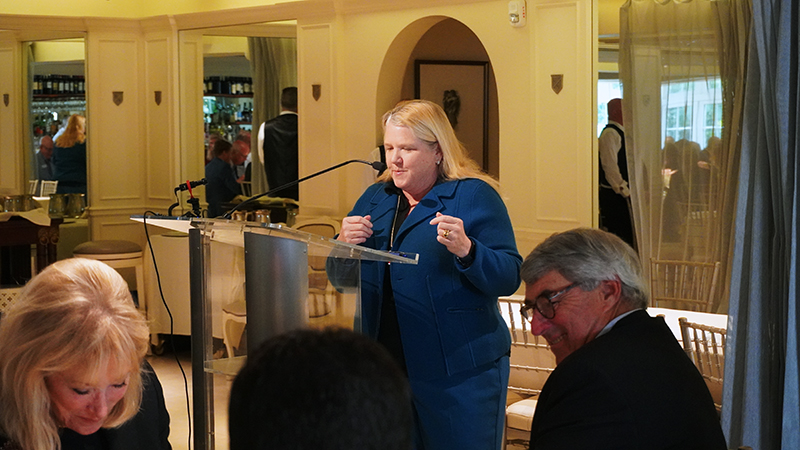 The mayor was featured speaker at the Palm Beach Civic Association’s Directors’ Luncheon.

The town finished the fiscal year that ended Sept. 30 with a surplus of around $3 million. Permits, parking and special assignment duty for police officers, along with grants, generated more money than anticipated, Moore told about 80 Palm Beach Civic Association directors at a luncheon held in their honor at Club Colette.

For this fiscal year, the Town Council approved an $89.1 million operating budget and lowered the property tax rate to $2.90 per $1,000 of taxable value. That is Palm Beach’s lowest rate in 25 years and the lowest of any full-service municipality in Palm Beach County, Moore said.

“This lean and mean budget is a reflection of the hard work of [Town Manager] Kirk Blouin and his entire staff,” she said.

The town will receive a total of $4.4 million in federal funding through the American Rescue Plan Act of 2021, which was designed to facilitate a national recovery from the economic and health impacts of the Covid-19 pandemic. The money will be used for sewer and drainage improvements.

The Par 3 Golf Course generated $3.65 million for the year that ended Sept. 30, its best year so far, Moore said.

The new Town Marina, which opened Nov. 1, is expected to take in $9.5 million in its first year, she said. The town plans to use $2.6 million in annual marina profits to offset cost overruns in the town-wide utility burial project over the next five years.

Retirement fund investments closed the fiscal year with an 18 percent return rate on investments – far above the plan assumption of 6.6 percent. The plan is officially 73 percent funded, but that percentage will be adjusted higher to reflect the recent market performance, Moore said.

The health insurance trust also finished the fiscal year with an 18 percent investment return and is more than 100 percent funded.

Turning to another front, Moore said she will lead a new nine-member Strategic Planning Board in developing an updated long-range plan for the town.

The other members of the advisory board will be nominated by Moore for council approval in December, she said. Moore said the goal is to present the updated plan for council adoption in early 2023.

The board will meet in public. Community engagement will be important, she said.

“I want everyone to realize that although there will be only nine official members of the committee, without full resident and community input, it will not be completely successful,” Moore said.

The last strategic plan was developed by a previous board led by Moore’s mother, then-Mayor Lesly Smith, and approved by the council in 2003.

Other new projects on the horizon include a complete renovation of the North Fire Station and development of a new master plan for Phipps Ocean Park, Moore said.

Renovation begins next year on the fire station. Water damage and mold have been discovered in the station, built in 1927 and landmarked in 1988. “This fire station is the second oldest functioning fire station in the state of Florida and as such is a historic landmark and must be preserved,” Moore said.

Mark Marsh has been chosen as the project architect, she said. An interim station will be set up adjacent to the existing one during construction, which is expected to take 18 to 24 months to complete.

The Preservation Foundation of Palm Beach is spearheading the Phipps Park project and has hired Miami-based landscape architect Raymond Jungles to develop the $140,000 plan to re-do the 18-acre, town-owned site. It’s subject to council approval.

“There’s always lots to plan for in our town,” Moore said.

“Palm Beach Civic Association directors are the backbone of our organization, and we are grateful to each of you for your support and your service,” Wright said.

Civic Association President Mary Robosson recognized the chairs of the organization’s 16 standing committees, whose members volunteer their time and expertise to focus on issues including health care, public safety, water and transportation.

Their work is part of the Civic Association’s core mission to enhance and protect the quality of life in Palm Beach, she said.

“Each of you, serving as a director, plays a vital role as an ambassador for our organization and its mission,” Robosson said.