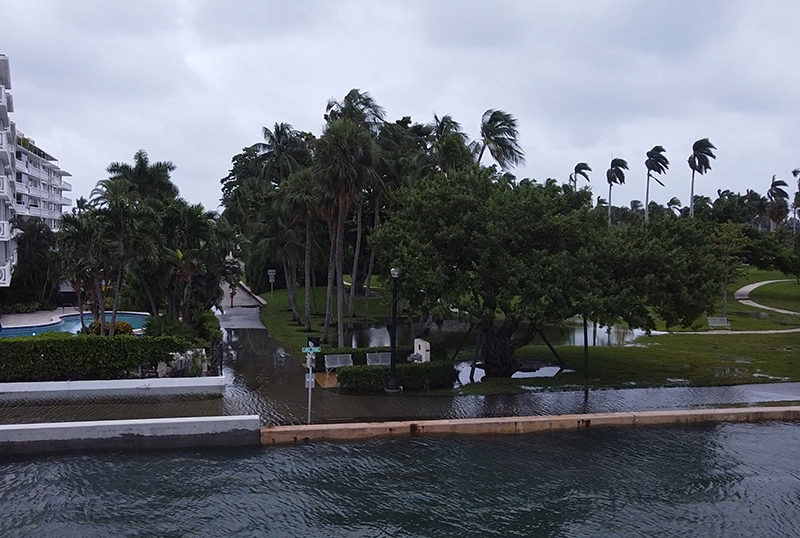 A consultant offered an early glimpse Thursday of a long-term coastal defense plan that calls for taller seawalls and higher building elevations to protect the town from flooding caused by rising seas.

Representatives of Massachusetts-based Woods Hole Group, the town’s coastal consultant, delivered a verbal summary of the long-awaited “coastal resiliency implementation plan” to the Shore Protection Board.

The presentation was the beginning of a far-reaching discussion likely to occur over an extended period, Public Works Director Paul Brazil said.

None of the changes will occur overnight, he said.

“This is a long-term program with a 50-year lookout,” Brazil said. “There are a lot of policy decisions to make.”

Thursday’s meeting was virtual. Woods Hole will make a more detailed presentation at the June 8 Town Council meeting. The plan will be revised based on feedback from town officials, and a draft report will be released later, said Bob Hamilton, president and senior coastal engineer with Woods Hole Group.

The biggest threat facing the town is flooding along its western shore caused by a storm surge through the Lake Worth Inlet and into the lagoon, Hamilton said.

“How are you going to deal with that?” he said. “That is going to require big thinking, public-private partnerships, maybe collaboration with the state and the [U.S. Army] Corps of Engineers.”

Woods Hole is recommending the town consider installing a “surge barrier” at the Lake Worth Inlet. The town should ask the Army Corps to study the idea because, if the Corps recommends the barrier, the project could be eligible for federal funds, said Nasser Brahim, senior climate resiliency specialist with Woods Hole.

“We recommend you request a study soon,” Brahim said. “The town has been very fortunate to not experience a massive flood. Because of the low-lying [lagoon-side] shoreline, mitigation opportunities are fairly few and far between.”

The town should consider “neighborhood-scale flood control systems” in 13 areas, mainly along the lake side of the island, he said. These could act as “independently effective” flood controls with a base elevation goal of FEMA plus two feet.

Examples of these flood control systems might include raising the height of dunes along the town’s Atlantic shore and increasing the height of the bulkheads and building up the adjacent grade on the lake side, Brahim said.

This ground floor elevation of 10 feet would apply, for example, to the new North Fire Station, scheduled for construction next year, he said.

That work could be done as part of the town’s already scheduled infrastructure maintenance plan, he said.

Florida Power and & Light electrical transformers, situated on ground-level concrete pads to serve the new underground utilities system being built in the town, need to be raised to higher elevations to avoid prolonged loss of power caused by flooding, according to a slide in the presentation.

When flooding is anticipated, Woods Hole suggests deploying temporary flood barriers across the interior of doorways as an alternative to costly flood doors.

The Woods Hole plan is divided into four components – town facilities and infrastructure, the Lake Worth shoreline, floodplain development and the town’s Comprehensive Plan, which should be amended to reflect the recommended changes, Brahim said.

No cost estimates were provided for any of the flood control measures outlined in the presentation.

One big question facing coastal communities is how governments should promote flood resilience on private properties – whether through mandates or incentives, for example.

Brazil said he will recommend that the council send the Woods Hole plan back to the shore board for more study and input.

“This covers a lot of ground,” he said. “We start with capital [infrastructure improvements], then move on to policy decisions that affect public and private properties. That’s going to be a tough topic. This is going to take time. Because you are impacting private property owners. There are repercussions and it could be controversial.”