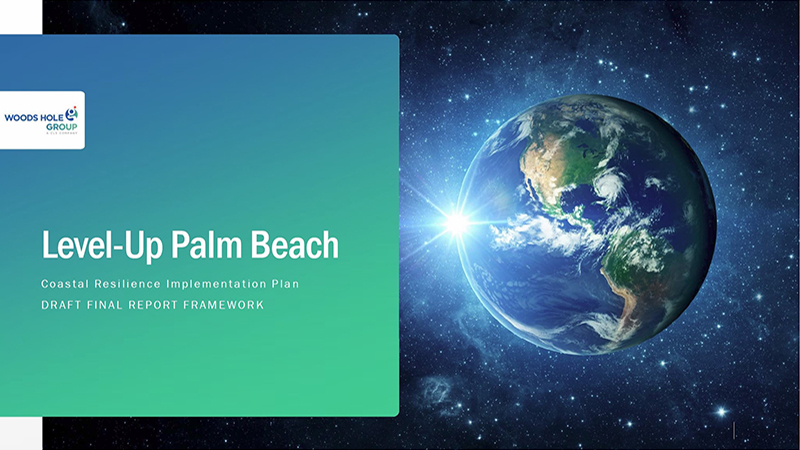 A coastal consultant led the Town Council Tuesday through an ambitious plan to defend the island against flooding from major storms as the world wades deeper into an era of rising sea levels.

Higher bulkheads and an elevated Lake Trail would gradually take shape along the town’s low-lying Lake Worth shoreline.

With help from the federal government, a storm surge barrier might even be erected at the Lake Worth Inlet.

“It’s an incredible amount of information for us all to digest,” Mayor Danielle Moore said of consultant Woods Hole Group’s presentation.

An environmental engineering consultant based in Falmouth, Mass., Woods Hole performed a coastal vulnerability assessment for the town in 2019. Now it’s preparing to release its long-awaited follow-up – a “coastal resiliency implementation plan” suggesting ways to strengthen the town’s flood defenses.

Woods Hole representatives said bold initiatives are needed to protect this small barrier island from potentially devastating storm surges and more frequent tidal flooding – a threat that is more dire than ever because of rising sea levels.

Woods Hole is seeking feedback from the council and Shore Protection Board before polishing off and releasing the plan later this summer.

The new report will help guide the council as it sets priorities for protecting public assets in the short term and distant future, Woods Hole President Bob Hamilton said.

It also raises important policy questions about how far-reaching and aggressive the town should be in encouraging or requiring private owners to protect their properties.

Hamilton said the town is already off to a good start.

“The town is positioning itself well to be a leader and a collaborator” with other coastal communities and the state of Florida, which has launched its own resilient coastline program, he said. “The town is doing a great job. When upgrades are made to assets, they are raised … there is a lot of resilience built into the town.”

The town’s coastal protection program, which includes periodic sand fills of its beaches and restorations of dune systems, is an excellent example of that resilience, he said.

But the town is vulnerable to flooding on its lake shore, Hamilton said. This could happen on a massive scale, depending on the intensity of the storm and size of the surge that could sweep through the Lake Worth Inlet.

“There is risk today,” he said. “The lagoon and the lakeside are not an easy fix.”

The town owns seawalls at its marina and Bradley Park and a public easement for the popular Lake Trail recreation path that hugs the lakefront. But most of the seawalls and bulkheads along the lake are privately owned. Raising the height of those walls will require public-private cooperation, Hamilton said.

Council President Margaret Zeidman said it’s time to face the town’s flood vulnerability on the lake side – however daunting the problem may be.

“Thank God the elephant in the room has finally surfaced,” she said.

Because the town can’t rebuild privately owned seawalls, Woods Hole recommends it consider creating up to 13 neighborhood-scale flood control systems – “pockets of flood protection” that could be established by ordinance, Brahim said.

Town Manager Kirk Blouin said a unified effort is necessary because “you are only as strong as your weakest link when it comes to flooding.”

In areas where the grade of the Lake Trail is very low, Woods Hole recommends elevating the grade when the adjacent seawall or bulkhead height is increased, Brahim said. The distance between the height of the wall and the ground should not exceed 2.5 feet, he said.

“The goal is to have a consistent elevation between the properties over time,” Brahim said.

Aesthetics are also a consideration, Public Works Director Paul Brazil said. “If you want to maintain the vista, you’ve got to raise the grade when you raise the seawall or bulkhead.”

The town could follow Fort Lauderdale’s example and pass an ordinance requiring private property owners to increase the height of their seawalls if they have been topped by flood water, Brahim said.

“We are trying to speed up the rate of change so we can get to that consistently higher elevation,” he said.

Woods Hole is recommending the town ask the U.S. Army Corps of Engineers to study the feasibility of installing a surge barrier at the Lake Worth Inlet.

The town would need to lobby its congressional representatives to help it be placed onto a waiting list. “It’s a long process,” Brahim said.

Councilwoman Bobbie Lindsay asked how effective the barrier would be against a major storm.

Brahim said it’s expensive but could result in savings elsewhere. “It’s a high-ticket item but you may not have to raise all of the other properties as high,” he said.

Blouin said staff is compiling a list of “local stakeholders” to approach the federal government about the storm barrier project.

“My question is, what is the timeline?” Blouin said. “There are a lot of unknowns … I would expect that solution would be further out, with no guarantees. We have other solutions that we have more control over.”

Electrical control panels and generators at the town’s stormwater and wastewater pump stations need to be mounted and wired at higher elevations, Brahim said.

Temporary flood barriers across the interior of doorways is a cost-effective way to secure equipment whenever flooding is anticipated.

At their presentation to the Shore Protection Board in May, Hamilton and Brahim also said Florida Power & Light electrical transformers, situated on ground-level concrete pads to serve the underground utilities system under construction in the town, need to be raised to higher elevations to avoid prolonged loss of power caused by flooding.

Blouin said Tuesday’s presentation was “the start of a very long discussion. You will have a number of decisions to make throughout the year.”

For now, officials are setting aside questions about what the initiatives would cost or how they would be paid for, Brazil said. But, responding to a question from Councilwoman Julie Araskog, Brazil said the town is not contemplating the use of public funds to pay for construction on privately owned seawalls.

The council must begin by setting its priorities, Councilman Lew Crampton said. “It’s a complex situation,” he said. “It’s going to take some creative thinking.”

“We are not the ones projecting where the sea level is going to go,” he said.

Hamilton said there is data from Key West showing sea level rise of almost .9 feet in the last 107 years.