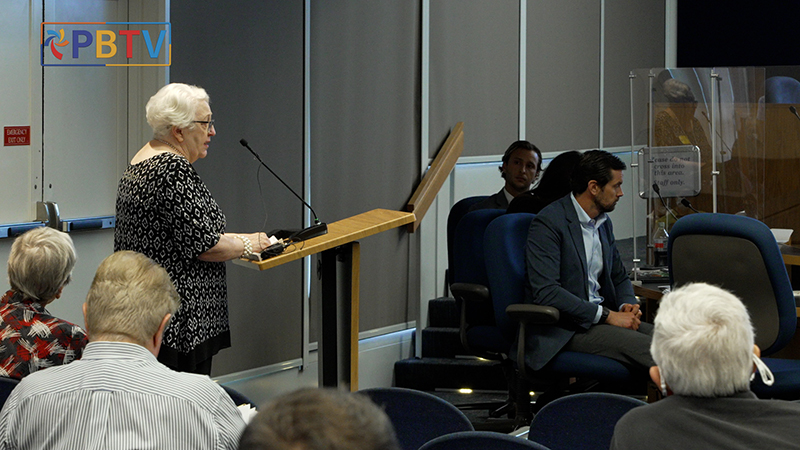 Area residents told the state’s Blue Green Algae Task Force Wednesday that they need to be informed, with more visible signs, so they will know when tests have shown unsafe levels of toxins in the waterways.

Pamela McAfee said she had no idea how dangerous the water in the C-51 canal was to her dog, who she said died after eating a contaminated lily pad after a family boat ride on the canal.

McAfee said there were no signs posted to warn the public that the water had tested at high levels for toxic cyanobacteria, also known as blue-green algae. A veterinarian was unable to save her dog, a 78-pound boxer named Bella, who was vomiting blood and died a painful death.

“There are children who weigh much less than her on this canal,” McAfee told the task force. “Our water is not safe. Let’s get these waterways cleaned up.”

Becky Harris of Stuart said her dog was one of several that got sick after it apparently ate something out of a waterway contaminated with microcystis, which is a cyanobacteria toxin.

“The sampling results were known days and weeks ahead of some of these dogs getting sick,” Harris said. “The testing agencies failed to warn the public. Who is in charge of warning the public? Who’s dropping the ball?”

Residents at Wednesday’s meeting were assured by water managers that better signs – visible enough to be seen by passing boaters – will be used beginning this summer.

Residents also said the state should eliminate the blue-green algae problem by addressing its cause instead of just treating the symptoms.

Toxic cyanobacteria, commonly known as blue-green algae, is caused by pollution of lakes, rivers and canals from stormwater runoff containing over-rich nutrients. Those nutrients, phosphorus and nitrogen, are used in fertilizers on farms and lawns.

The five-member task force, made up of leading scientists and researchers, was appointed by Gov. Ron DeSantis in 2019 to recommend ways to combat and prevent the harmful algae blooms.

About 300 people participated, either through Zoom or in person, at Wednesday’s task force meeting at the South Florida Water Management District offices in West Palm Beach.

At Wednesday’s meeting, the task force examined ways that innovative technologies are being used to get rid of the algae blooms. But board members said they agree the problem ultimately must be solved by halting or curtailing the flow of nutrient pollution in Lake Okeechobee and the rivers and canals.

Lindsay Cross, government relations director at Florida Conservation Voters, said the state legislature continues to pass laws in conflict with the goals of the task force. The bottom of Lake Okeechobee is covered in muck created by decades of polluted stormwater runoff.

“I’m frustrated – 13,000 metric tons of nasty pollutants are in Lake Okeechobee … none of that has been mitigated, removed or addressed,” Cross said.

Eve Samples, of Friends of the Everglades, said a peer review is needed so the task force will know if the innovative technologies are really working. She, too, said the task force must tackle the problem at its root.

“Many of you pointed to the need to treat the cause, not just the symptoms, of blue green algae,” Samples told the task force. “I ask you to do everything in your power to make that happen with actionable regulation and laws if needed.”