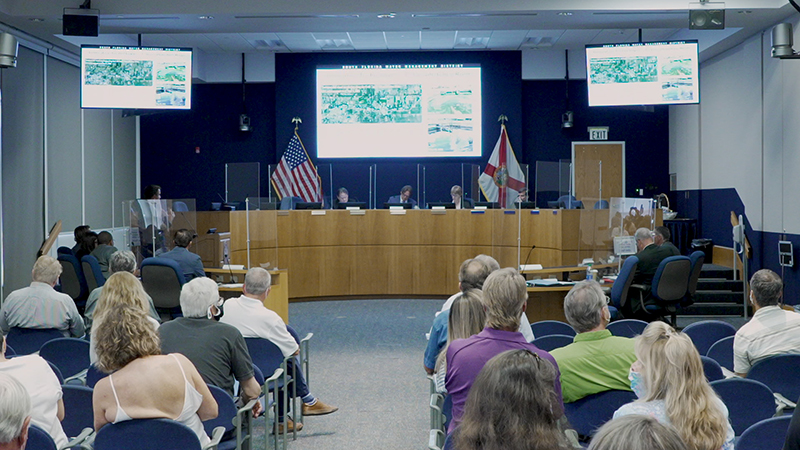 A panel of leading scientists examined on Wednesday innovative technologies that are being deployed throughout the state to combat harmful blue-green algae blooms.

It was the first gathering since November of the five-member Blue Green Algae Task Force, appointed by Gov. Ron DeSantis in 2019 to recommend ways to destroy the algae blooms and stop the over-rich nutrients that fuel them from polluting the state’s lakes, rivers and estuaries.

In the last two years, the Florida Department of Environmental Protection has granted permission for 20 projects that are being tested against the algae blooms, or soon will be tested, under an innovative technologies grant program.

“We’re looking at a broad spectrum of ideas,” said Ed Smith, director of the DEP’s office of water policy and ecosystem restoration. “How do we prevent it? How do we get it out?”

About 300 people participated in the public meeting through Zoom or in-person where the gathering was held at the South Florida Water Management District offices in West Palm Beach.

The toxic blue-green algae blooms, which are cyanobacteria, have become a more frequent menace in Florida’s waterways during the last five years.

The problem took a more serious turn on May 28, when the City of West Palm Beach announced that its water supply was contaminated with elevated levels of a toxin created by cyanobacteria. The city’s water has since tested at safe levels for the toxin.

Smith was one of several DEP and water district officials who outlined for the board and public the new methods being tried against the algae blooms.

Innovations range from nano-bubble ozone technology, soon to be used in the Loxahatchee River, to bioreactors already at work in Bonita Springs’ Imperial River. The bioreactors use bacteria to consume the nutrients that cause blue-green algae blooms. The nano bubbles, each of which is far smaller than a grain of sand, use oxygen and ozone to dissolve the algae.

Rory Feeney, bureau chief for land resources at the water management district, said ultrasonic transducers, inaudible to the human ear, have been shown to damage blue-green algae so it stops feeding and reproducing.

Other innovations target early detection with the goal of predicting algae blooms.

These include an automated sailboat, developed by scientists at Florida Atlantic University’s Harbor Branch, to continuously track potential algae blooms in heavily polluted Lake Okeechobee. The researchers hope the HALO observing system will help them forecast where and when new blooms will emerge.

The water district also is using drones and satellite images to monitor the lake for potential blooms. But the satellite images are difficult to read because there is so much dissolved organic material in the lake, Feeney said.

James Sullivan, the executive director of FAU’s Harbor Branch, and a member of the task force, said eradication of blue-green algae blooms presents many formidable challenges.

One is identifying technologies that remove the harmful algae blooms without destroying other forms of algae. “You can’t wipe everything out,” Sullivan said. “Not all algae are bad. Algae are essential to the ecosystem.”

Sullivan also noted that many forms of blue-green algae do not float on the surface of water bodies, making their detection and removal more difficult. Eradicating blue-green algae in moving water such as rivers is problematic because it mixes in the water column with other algae that is beneficial and should not be destroyed, he said.

“If we remove microcystis, what will take its place?” Sullivan said. “Nature abhors a vacuum. It could be another (form of) blue-green algae that’s just as harmful.”

Technologies that succeed in a pilot project may not be adaptable on a larger scale, he said. Sullivan illustrated this point with a reference to Feeney’s assertion that hydrogen peroxide dissolves blue-green algae without presenting a risk to the public or harming other algae forms.

“We are not going to cover Lake Okeechobee in peroxide,” Sullivan said. “It’s just not feasible to do that.”

Dr. Michael Parsons, professor of marine science at Florida Gulf Coast University, and a task force member, said the state will have to address the root cause of the pollution in Lake Okeechobee.

The 730-square-mile lake has a thick layer of muck on the bottom after receiving polluted surface water for 70 years. The lake is full of nutrient pollution – chiefly phosphorus and nitrogen used in fertilizers.

“The only way to treat the whole lake has to be nutrient reduction,” Parsons said.

Ultimately, Sullivan said, the goal is for the water to be so clean the algae blooms do not occur at all.

“We can’t just be putting out fires all the time,” he said. “Let’s concentrate on technologies that prevent these blooms.”

Sean Sculley, chief of the water management district’s applied sciences bureau, said it has since last year stepped up monitoring for the blooms, especially during the warm summer months when conditions are ideal for them to thrive. The number of monitoring sites has increased from 144 to 211, he said.

“We now collect more samples during the bloom season,” Sculley said. “We get data practically every week.”

Sullivan said the increased monitoring will prove valuable in refining methods to wipe out the blooms in the future.  “That data is not going to go to waste,” he said.