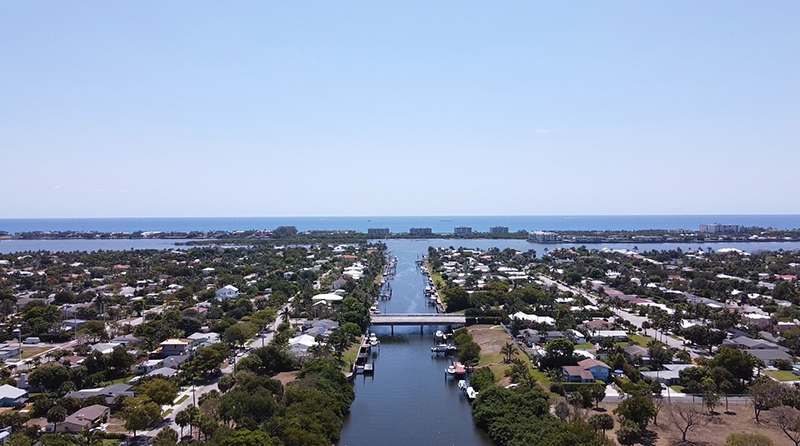 Environmentalists urged a supportive Town Council on Tuesday to join in a regional push to persuade water managers to keep polluted water from Lake Okeechobee from being discharged into the Lake Worth Lagoon.

The detection this spring of toxic cyanobacteria, also known as blue-green algae, in Lake Okeechobee and canals used to release lake water into the lagoon, has stoked concern that algae blooms will show up in the lagoon this summer. Toxic blue-green algae thrive in warm, slow-moving water.

“We have a water quality problem in South Florida,” Lisa Interlandi, executive director of the Everglades Law Center, told the council. “It is worsening.”

Interlandi said governments and residents in communities around the Lake Worth Lagoon should organize and tell the U.S. Army Corps of Engineers that it’s time to end the practice of discharging polluted lake water into the lagoon.

“We will be asking virtually every local government that borders on the lagoon, and environmental organizations, to join us in delivering this very simple message: Send as much water as possible south to the Everglades,” Interlandi said. “Keep it out of our estuaries and the lagoon.”

Lagoon cyanobacteria can cause thick scum on the water surface and nasty odors. The Environmental Protection Agency classifies cyanobacteria as harmful because the algae blooms create dead zones in the water and release toxins harmful to people and animals.

In March, a blue-green algae bloom was identified in water discharging into the lagoon with toxin levels high enough to trigger the posting of multiple warning signs at Spillway Park, a popular fishing spot in Lake Worth.

Lake Okeechobee is heavily polluted after decades of receiving runoff from development and agriculture in the watershed extending north to Orlando.

Historically, the U.S. Army Corps of Engineers has held water in the lake to irrigate farms during the dry season. When the rainy season arrives, if lake levels are considered too high for safety, the Army Corps discharges the water through canals into the estuaries and lagoons. The water arrives in the Lake Worth Lagoon through the C-51 Canal, which empties near the Southern Boulevard Bridge.

A massive blue-green algae bloom engulfed the St. Lucie River in 2016 and another bloom devastated the Fort Myers-Cape Coral area in 2018. That same year, seven counties, including Palm Beach County, were named in a sweeping emergency order that increased monitoring of blue-green algae.

“Around the St. Lucie Estuary, they are actively advocating for their region,” Interlandi said. “We need to start doing the same and speak with a unified voice.”

The time to do that is now, she said. Every 10 years, the Army Corps’ Jacksonville District updates the Lake Okeechobee System Operating Manual that sets policy for how water will be released from Lake Okeechobee during the approaching decade. That process is under way and the Corps is accepting public comment.

Interlandi and Reinaldo Diaz, of Lake Worth Waterkeeper, are attempting to build a Lake Worth Lagoon alliance that can speak with a unified voice to the Army Corps, South Florida Water Management District, state government and congressional representatives.

Significant changes in water management policy are needed for Lake Okeechobee, Diaz said. Policies crafted long ago to keep the lake water level high, to guarantee irrigation water for agriculture, are outdated and haven’t caught up to today’s science.

Councilwoman Bobbie Lindsay, who has lived in Palm Beach since childhood, said the problem has existed for as long as she can remember.

“We have to find a balance with big agriculture,” Lindsay said. The persistent blue-green algae blooms and contamination of the drinking water supply “could cause more action than we have had in decades.”

Discharges from Lake Okeechobee go through a system of canals that reach the Lake Worth Lagoon and Grassy Waters Preserve, a 23-square-mile freshwater remnant of the Everglades that serves as the main water source for the City of West Palm Beach.

Around the same time, on May 3, the city found cylindrospermopsin, a toxin produced by a variety of freshwater cyanobacteria, in low levels in its water supply. Subsequent test results on May 19-20 were above a threshold considered harmful for vulnerable populations.

The city did not notify the Town of Palm Beach until May 28. A water advisory, urging vulnerable members of the population not to drink the water, was issued at 10 p.m. that evening. The advisory was lifted June 4 after tests showed the toxin had fallen to safe levels.

Mayor Danielle Moore said she’s heard from many residents who remain “concerned, upset and worried” about the safety of the town’s drinking water.

“Learning about the presence of cyanobacteria in our drinking water was extremely concerning, but learning this presence was known by the City of West Palm Beach at a much earlier date was very disappointing and frankly upsetting,” Moore said. “I was more than a little angry.”

Bob Holuba, a Palm Beach Civic Association director and North End resident, accused the City of West Palm Beach government of a “cover-up to the crime.”

“The crime is the algae in the water,” Holuba said. “The cover-up that a vulnerable population with preexisting conditions, during the Covid era, has had to withstand 10 days of this information being withheld and their personal safety put at risk.”

Councilman Lew Crampton and Councilwoman Julie Araskog both told Interlandi and Diaz that they support their effort to keep the polluted lake water from being discharged into the local waterways.

“There has not been a lot of focus on what needs to be done to fix this,” Diaz told the council. “Lisa [Interlandi] and I are actively involved with the South Florida Water Management District. We are asking them to improve their transparency.”

The water management district tests for toxins in the watershed but isn’t transparent about what it finds, Diaz contends. “They don’t even report the test results at their board meetings,” he said.

“In the meantime, I will continue to express my concern for open communication and keeping our drinking water safe,” Moore said.