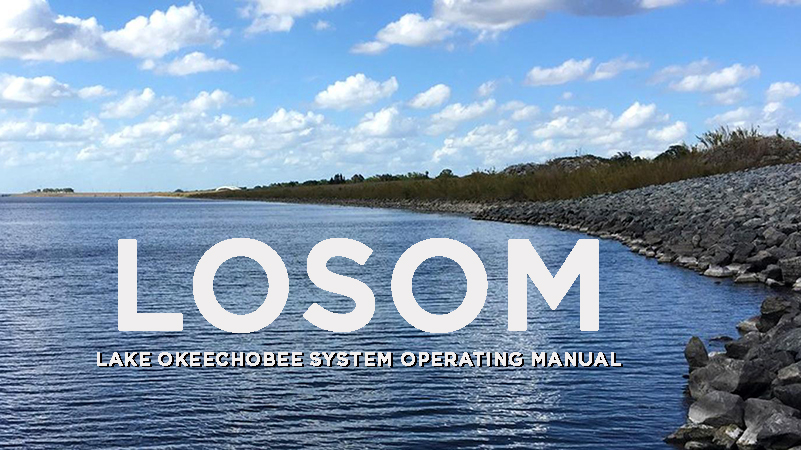 The federal government has chosen a new water management plan that calls for fewer discharges of polluted Lake Okeechobee water into the coastal estuaries.

The U.S. Army Corps of Engineers announced the decision during a Zoom meeting Monday following more than two years of study. The Army Corps manages water levels in the 730-square-mile lake for flood control, water supply and recreation.

As currently written, the plan, referred to as “alternative CC,” would eliminate about two-thirds of all discharges from Lake Okeechobee to the St. Lucie Estuary while more than tripling flows south from Lake Okeechobee toward the Everglades. It also significantly increases the percentage of time the Caloosahatchee River receives optimal flow levels – those that maintain the proper salinity levels – and nearly eliminates discharges into the Lake Worth Lagoon.

The news was generally well received by environmental groups and others, including the Town of Palm Beach, who urged water managers to adopt a plan that would improve water quality and minimize harmful blue-green algal blooms in the estuaries.

“When you look at this in total, it really represents a balance,” Kelly said.

The Corps took public comment this summer as part of its Lake Okeechobee System Operating Manual (LOSOM) review, which is performed every 10 years.

Alternative “CC” enjoyed the support of nearly all members of the South Florida Water Management District Governing Board, who said it’s the best approach for the ecosystem and for protecting the public from toxic blue-green algal blooms.

But there is also widespread consensus that “CC” needs to be “optimized” or fine-tuned for a better overall performance. Kelly said the Corps will engage with the public and work on optimizing “CC” between Aug. 5 and Oct. 14.

The plan should become formal around Nov. 26, Kelly said. But he said it won’t go into effect until after the rehabilitation of the Herbert Hoover Dike, a 143-mile earthen dam around Lake Okeechobee, is completed next year.

“Our science team also concluded ‘CC’ is the best alternative to optimize a balanced plan,” Davis said. He said it can be modified to perform even better for the estuaries.

Concerns about toxic cyanobacteria, or blue-green algae, have intensified in the last five years because algal blooms have become more common. This spring the City of West Palm Beach, which supplies water to Palm Beach, reported high levels of cyanobacteria contamination in its water supply.

Palm Beach’s Town Council unanimously adopted a resolution on July 13 urging the Army Corps to adopt a modified version of “CC” as the best way to protect the environment, public health and the water supply.

Lake Okeechobee is heavily polluted after decades of receiving rainwater runoff full of over-rich nutrients from fertilizers and septic tank leakage. Algal blooms are common in the lake.

Water levels in Lake Okeechobee tend to fluctuate by around three to five feet each year. The Army Corps tries to manage the lake level at between 12.5 and 15.5 feet and discharges water when levels get too high. Those discharges have been blamed for the increases in blue-green algal blooms in the rivers and coastal waters.

Members of the public urged the Corps during Monday’s meeting to improve “CC” before putting it into effect.

Nyla Pipes, of the One Florida Foundation, which works to protect the state’s resources, said “CC” falls short for the Caloosahatchee River and for those who depend on Lake Okeechobee for their water supply.
“Please make the optimization process as robust as possible,” she said.

Drew Martin, of the Sierra Club’s Loxahatchee Group, said it appreciates the Corps’ choice of a plan that will help the estuaries. But, like others, he noted that Lake Okeechobee itself is not being cleaned up. He suggested improving the wetlands around the lake to enhance nature’s ability to cleanse it.

More lake water needs to be sent south to the Everglades, but water managers must first find a way to cleanse the water at greater volumes, he said.

Carol Youell said water managers must attack the root of the problem – continuing nutrient pollution in the lake caused by water runoff that comes from as far north as Orlando.

“We are never going to solve the nutrient problem unless we address the northern watershed,” she said. That will require education, public support, and enforcement of environmentally friendlier practices, she said.

Newton Cook, of United Waterfowlers of Florida, was among those who expressed concern about allowing lake levels to reach 15 feet or higher. A deeper lake means less sunlight penetration, which kills beneficial plants and degrades the water quality even further, he said.
“If the lake is not healthy, nothing [in the system] is healthy,” Cook said.

Kelly described the optimization process as one of compromise – “choosing four or five areas to improve, then determining what the trade-offs will be.”

He suggested establishing a “multifunctional team” to examine ways to achieve environmental recovery in Lake Okeechobee.

“One thing I have heard consistently is the idea of a recovery mode for the lake,” Kelly said. “We know ‘CC’ doesn’t perform as well for the lake” as other alternatives.
The Army Corps and water district board members have said LOSOM can’t solve all the problems in the lake and South Florida water ecosystem.

But the Corps has said that conditions should improve after infrastructure is completed in 2025, enabling water managers to hold and cleanse more water outside of the lake, thus further reducing harmful discharges.