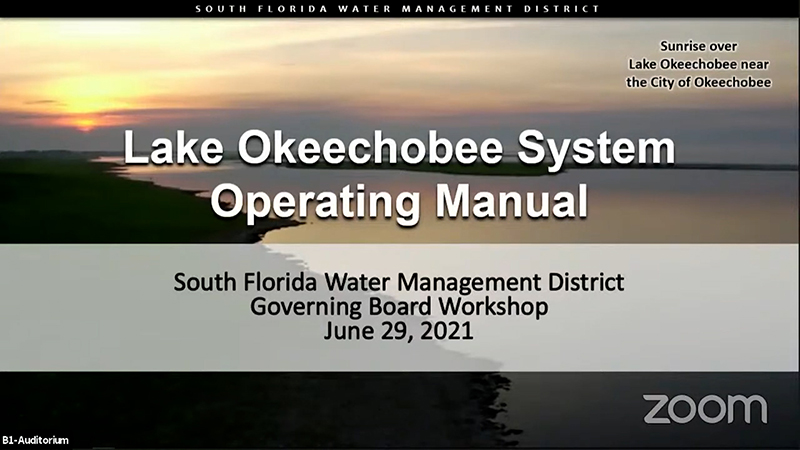 The South Florida Water Management District’s governing board, which hosted the day-long meeting, is expected to recommend one of six water release plans being considered by the U.S. Army Corps of Engineers.

The water district board’s decision is expected at its next meeting on July 15.

“This is a legacy-defining moment for this board,” U.S. Rep. Brian Mast, R-Palm City, said during the public comment portion of the meeting. “This is the biggest moment in fulfilling a vision that the Army Corps will use to manage Florida waterways for at least the next decade.”

Plans call for the Army Corps, which manages Lake Okeechobee levels for water supply and flood control purposes, to select the water release plan in August, said Tim Gysan, project engineer for the district. Details will be fleshed out through October.

The plan, updated every 10 years, is called the Lake Okeechobee System Operating Manual, or LOSOM.

The Army Corps’ top priority in developing the plan is flood control, Gysan said. But he said the federal agency considers other factors, including environmental impacts and public health concerns about the increase in blue-green algae blooms in coastal estuaries in recent years.

The selected plan will be one of the six alternatives, with modifications based on input from the public and water district board, he said.

Water district and public opinion “is extremely important to our-decision making process,” Gysan said. “The water belongs to the people of Florida. We want people to participate and let us know what they want.”

With a surface area of 730 square miles, Lake Okeechobee has been called the “liquid heart” of the natural water system in South Florida, home to a population of nine million people.

The lake’s primary water source is the Kissimmee River to the north. The Corps manages lake levels for flood control and water supply, including agricultural irrigation. The Corps strives to keep the depth between 12.5 and 15.5 feet.

During the rainy season months, if water levels are too high, the Corps discharges water from the lake to the south, toward the Everglades and Florida Bay or to the state’s east and west coasts, through the St. Lucie and Caloosahatchee River basins.

The lake is heavily polluted after decades of receiving water runoff containing sewage, manure and fertilizers from agriculture and development. The lake contains cyanobacteria, or blue-green algae, that blooms when fed by these nutrients.

The blue-green algae blooms, which are toxic to people and animals, have been appearing with alarming frequency in coastal estuaries, where the lake water is discharged, since 2016.

Many of the community leaders, environmentalists and residents who spoke at Tuesday’s meeting urged water managers and the Corps to embrace a plan that would discharge more excess lake water to the south, toward the Everglades and Florida Bay, and less of it toward the coastal waters.

That plan, which would be a modified version of the one of the six alternatives being considered, would store less water in the lake during the dry season months, which should reduce the volume of water discharges to the coastal areas.

Mast was among those who argued for the plan to store less water in the lake and discharge more water south and less through the Caloosahatchee and St. Lucie rivers.

“The status quo has held the lake too high for too long by artificially inflating the lake levels during the dry season to benefit the sugar industry to the detriment of both estuaries,” Mast said.

He called on the water district board to back a plan that would manage the lake levels for the benefit of the environment “and stop these harmful discharges … if you don’t do that, you’re choosing again to put corporate profit above public health and above our environment that draws people from around the world into our state.”

Jessica Pinsky, director of public affairs & policy with Captains for Clean Water, called on the Corps to “adopt a plan that sends the maximum amount of water to the Everglades, Everglades [National] Park, and Florida Bay … our economy relies on clean waterways and drinking water.”

Dan DeLisi, a Lee County resident and former board member and former chief of staff at the water district, said he opposes the alternative favored by Mast, Pinsky and others. That plan “will send the highest total volume of flood control releases to the Caloosahatchee River. The [water releases] will be in flows in the stressful to harmful range. That hurts the ecosystem.”

Board member Ron Bergeron Sr., in an interview during a meeting break, said, “We need to clean up the water supply and restore the natural sheet flow of water [through the Everglades] to Florida Bay. That is better for the rivers and estuaries to the east and west because there will be less water going there, above natural levels.”

Whatever plan is chosen, it won’t be ideal for everyone, Gysan said. Infrastructure must be completed that will enable managers to store water outside of the lake.

Three stormwater treatment areas, totaling 6,500 acres of manufactured marsh being built by the water district, are scheduled for completion in 2023. Digging starts in October on a 10,500-acre reservoir that will enable water managers to send clean water south to the Everglades and curb harmful discharges to the coastal estuaries, officials have said.

“The infrastructure is extremely important,” Gysan said. “It provides storage that gives more flexibility on how you can operate.”

The water district is a 16-county area stretching from Orlando to the Florida Keys.