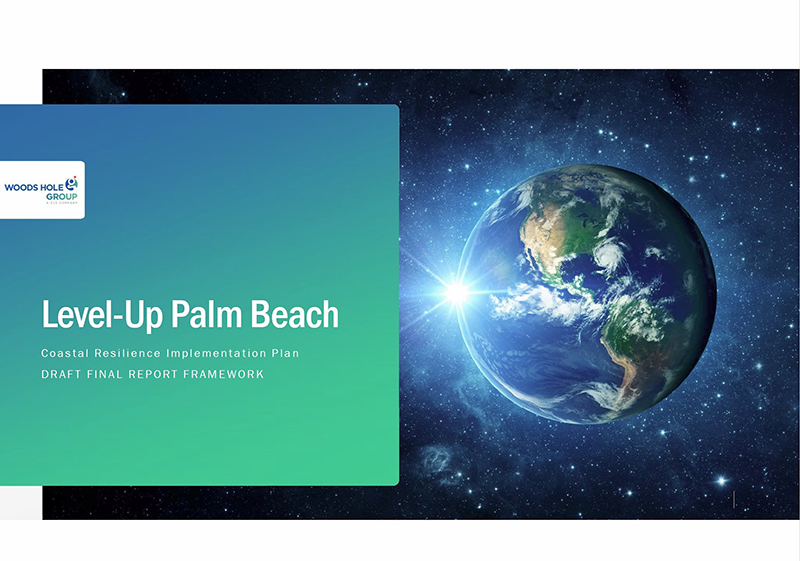 Town Council to dive into coastal defense plan this fall

A consultant’s recommendations to strengthen town flood defenses during an era of sea level rise will be before the Town Council this fall.

A draft of Woods Hole Group’s “Level-Up Palm Beach” Coastal Resilience Implementation Plan became publicly available this week. It will be presented to the council in either September or October, Town Manager Kirk Blouin said Thursday.

After performing a town-wide flood vulnerability assessment in 2019, Woods Hole followed up with this plan that recommends short and long-term solutions for both public and private properties. The international environmental consulting firm is based in Massachusetts.

Its recommendations include town mandates for new seawalls to be two feet taller and first-floor building elevations up to three feet higher than current standards.

Higher bulkheads and an elevated Lake Trail would gradually take shape along the town’s low-lying Lake Worth shoreline.

The report suggests the town ask the federal government to study the feasibility of erecting a storm surge barrier at the Lake Worth Inlet.

It’s up to the council to adopt a plan and determine how to pay for it.

“There will be a very specific plan to address these things but, at the same time, it will be adaptive management and very fluid as we monitor sea level rise,” Blouin said.

The town has a mature coastal protection program through which it has invested tens of millions of dollars on sand fills and dune restorations on its Atlantic Ocean shore.

Because of that investment, there are very few vulnerabilities along the Atlantic Ocean shore, Woods Hole noted in the plan.

The town also has built resilience into its public works assets by flood proofing and elevating critical infrastructure, Hamilton said.

“There is a lot of resilience built into the town,” he said.

The Lake Worth Lagoon poses the primary flood risk for the vast majority of the town, according to Woods Hole. “… the lower existing shoreline elevation and infrastructure along Lake Worth Lagoon is not sufficient to mitigate present or future coastal flooding risks. This not only includes flood risk from coastal storms, but also high tide sunny day flooding.”

“As [the] sea level rises over the next 10-20 years, the tide levels currently causing nuisance flooding are projected to multiply in frequency and duration,” the report states. King Tide levels are also projected to climb higher, extending areas and depths of flooding, and posing a greater threat in low-lying areas.

Infrastructure must be created, raised and strengthened to meet the flood risks, according to the plan. Simply elevating and flood-proofing buildings “will not keep salt water off roads, trails, parks, or landscaping, or out of underground infrastructure,” Woods Hole said in the plan.

Controls are needed at the source of flooding to mitigate flood risk and build resilience, according to Woods Hole.

A storm surge barrier at the Lake Worth Inlet and possibly other inlets to the Intracoastal Waterway has the potential to provide town-wide protection from coastal flooding during major storms, including securing evacuation routes and sewers.

But even a storm surge barrier at the Lake Worth Inlet would not prevent future flooding during high tide because the inlet would have to remain open to navigation and commerce under normal conditions.

Engineered and natural shoreline infrastructure is also needed to provide a critical line of defense along the lake shore. New flood-control standards for the privately owned properties would have to be adopted by the council by ordinance, the plan states.

The town also can lead by example. Woods Hole cited the new Town Marina bulkhead, which has been built so that is structurally adaptable so its height can be raised whenever needed in the future.

The plan suggests the town designate up to 13 neighborhood-scale coastal flood control systems so there would be a unified and consistent effort to raise and maintain the bulkheads facing the lake.

“The town can collaborate with neighbors and engage federal and state partners to advocate for the study and funding of potential regional, town-wide, and neighborhood-scale solutions,” the plan states.

Blouin said there must be a town-wide approach to flood resilience because it involves both government and privately owned assets. Private and public cooperation will be crucial to raising and maintaining the bulkheads and seawalls, Blouin said.

“You are only as strong as your weakest link,” he said.

Woods Hole says town ordinances should be amended to require a “consistent minimum top elevation” on seawalls and bulkheads. Along the lake shore, the adjacent grade along the east face of the bulkhead wall should be raised so it is no lower than 30 inches below the top of the wall, the report states.

There will be important policy considerations for the council to make in the coming months, Blouin said. One of those will be how and when to trigger the new and tougher flood-control requirements for private properties.

Currently, owners are required to bring their properties up to new building guidelines whenever renovations or additions reach 50 percent of the property value.

“I expect the trigger will be set a lot lower” for the new flood-control standards, Blouin said.

Palm Beach is uniquely suited to adapt much more quickly than other coastal communities because there is already so much residential demolition and redevelopment on the island, he said.

Once it adopts a plan, the council will have to decide how to fund it. Blouin said he believes the town could meet its implementation costs without increasing taxes.

“We are already looking at ways to pay for it and how to build that into the budget,” he said.

State and federal financial support could play a large role.

Earlier this year, Gov. Ron DeSantis signed legislation that will set aside hundreds of millions of dollars for flood infrastructure and storm-hardening projects.

The legislation requires the Department of Environmental Protection to submit an annual plan for up to $100 million in local flooding and sea level rise projects. Local governments can apply for the money and the department will rank their applications.

“The town is already preparing to apply for state flood-control dollars, Blouin said. Palm Beach is well positioned to receive the aid because of the proactive approach it has taken,” he said.

“We are well ahead of other communities who are just starting to examine their vulnerabilities,” he said.