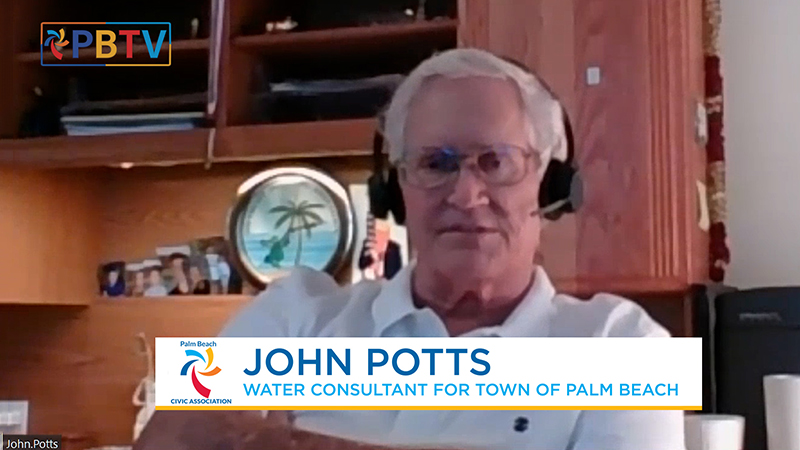 A water quality expert offered the Town Council a glimpse Tuesday into the work of a panel looking for ways to protect the City of West Palm Beach’s water supply from blue-green algal contamination.

John Potts, senior utilities engineer with Kimley-Horn & Associates, is representing Palm Beach as an observer at meetings of the city panel.
Potts has worked on water infrastructure projects throughout Florida, including in West Palm Beach and Palm Beach, for more than 40 years.

“My role is not to intervene,” he said. “I’m not bashful though. I will speak out if that is appropriate. I have significant pride in my profession.”

The city recently created the board, made up mostly of engineers and scientists, to examine the circumstances leading to the detection in May of the toxin cylindrospermopsin in its treated water supply, and the city’s response.

The city, which provides water to Palm Beach and South Palm Beach, was criticized for waiting eight days before notifying the town and issuing a public advisory about the contamination.

Tests showed the toxin, which is produced by cyanobacteria, also known as blue-green algae, to be at levels exceeding federal health advisory limits.

The advisory was lifted June 4 after tests showed the toxin had fallen to safe levels.

One of Potts’ responsibilities will be to examine and interpret complicated water test data that the city has agreed to provide to the town, Public Works Director Paul Brazil said.

Potts said he will continue to update the town on developments with the panel, which has met three times but is still in the early stages of what he said is expected to be a two-year endeavor.

The city relies on a surface water supply that flows 20 miles from Lake Okeechobee through canals and the Grassy Waters Preserve to Lake Mangonia and Clear Lake, west of downtown. The city’s water treatment plant draws water from East Clear Lake and is a conventional lime-softening facility.

The water panel is reviewing data from an expansive area that includes more than 80 testing locations, Potts said. It hopes the information will help enable water managers to predict when an algal infestation is about to occur, he said.

The board has concluded that using chlorine to treat the blue-green algae is not possible, he said.

Councilman Lew Crampton asked Potts if the city is “using the highest and best technology for managing the situation?” Potts responded, “There are so many treatment technologies. It’s hard to say which is best.”
Potts said the city has adopted a proactive stance, having lowered its threshold for responding to water contamination.

“The city staff is very focused on testing the water quality and improving the performance of their treatment processes,” Potts said. Those processes include the use of carbon filters and an ultra-violet treatment system, introduced in 2019, to remove bacteriological contaminants.

It would be possible for the city to pursue access to a groundwater (aquifer) supply instead of continuing to rely on surface water. But obtaining South Florida Water Management District permission to tap into the aquifer would be a big challenge, Potts said.

The water district requires permit applicants to demonstrate that there would be adverse impacts to the environment or to existing users of the supply.

Jason Debrincat, senior engineer for the town, and Jason Lee, an engineer with Kimley-Horn, are also attending the water panel meetings on behalf of the town.

The town’s water supply agreement with the city expires in 2029. Last year, the council hired Kimley-Horn for $316,380 to study the town’s future water supply options. Kimley-Horn’s report is due next month.