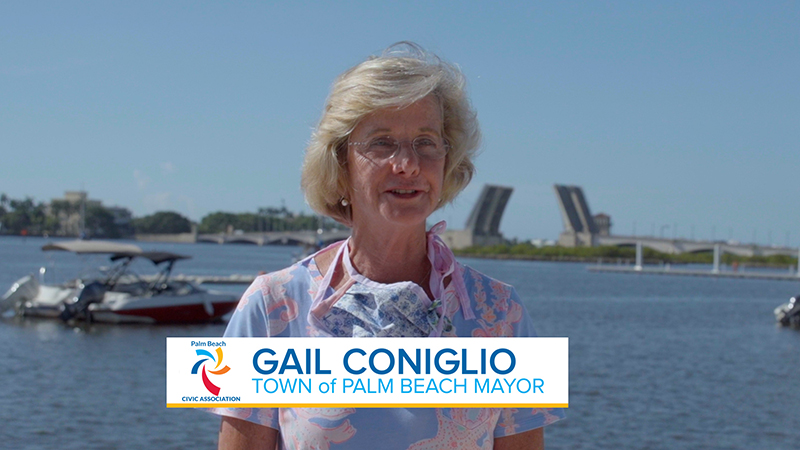 Gail Coniglio’s 10-year tenure as mayor will end at Tuesday’s Town Council meeting, when Councilwoman Danielle Moore will be sworn into office as her successor.

The swearing-in ceremony will be at 10 a.m. next to the Mizner Memorial Fountain beside Town Hall, following an hour-long celebration of Coniglio’s service to the town. The council will then reconvene in the meeting chambers in Town Hall, for a public meeting that will also be available for electronic participation through Zoom.

A former nurse, restaurateur, mother and grandmother, Coniglio was elected mayor in 2011 after serving four years on the council. In seven town elections – twice for a council seat and five times for mayor – she never faced a challenger. Moore was nominated for mayor without opposition at the Jan. 12 caucus after Coniglio announced in December that she would not seek another term.

Coniglio played a leading role in building stronger ties with other municipalities and government agencies, most notably in strengthening partnerships with the federal and state governments for coastal protection and securing more federal aid for that effort.

She oversaw major improvements in town infrastructure, including the renovation of Town Hall Square, construction of a new recreation center, the launch of a town-wide conversion from overhead to underground utilities, and construction of a new town marina that opens at the end of this year.

She also presided over the town’s Centennial celebration in 2011.

Coniglio has summed up her service as a “labor of love,” and said she will miss the people and teamwork most of all.

Those who have known her and worked with her over the years expressed admiration for Coniglio’s energetic work ethic, persistence and diplomacy, and said they will miss her warmth and genuine consideration for others.

Zoning Commission Chairman Michael Ainslie:
“Gail Coniglio is a quiet warrior. She fought for Palm Beach in West Palm, in Tallahassee, at the Corps of Engineers, on Peanut Island, in Washington and most of all in our community. Palm Beach is so much better for her service and will be for generations to come.”

Town Councilwoman Julie Araskog:
“Gail, you have been our fearless and effective leader responsible for initiatives and changes, like the Beach Management Agreement and federal and state sand renourishment, that will be forever remembered as a lasting benefit you gave our town. Your spirit, wisdom, compassion, energy and love for our town is endless. The residents and I appreciate your non-stop efforts on behalf of Palm Beach, our employees and residents. You will be missed!”

Town Manager Kirk Blouin:
“I admire Mayor Coniglio’s self-sacrificing devotion to her family and the town. Her energy and ability to connect with employees, citizens and other government officials around the state for the good of the town is impressive.”

Deputy Town Manager Jay Boodheshwar:
“I will miss her unexpected visits to Town Hall with special treats or a bouquet of flowers in hand for our employees. And it wasn’t just Town Hall – the mayor made it a point to visit employees throughout the years wherever they worked, and that has meant more than she knows. I will miss the early morning voicemails, usually beginning with ‘Rise and shine!’ or ‘Hey Jay bird!’ And I will fondly remember the work we did together on numerous projects. She’s been a constant for the town on the dais and a familiar face for the staff through some challenging years. Her steady hand and thoughtful guidance will be sorely missed.”

Town Councilman Lew Crampton:
“Turns out that I’m the last rookie council person to make it through Gail’s ‘Council Basic Training School.’ This means I’ve been well brought up in the ways and means of Town Council practices, learning to keep my comments short, pithy and relevant. Even now, my shins are sore from being kicked under the table when I’ve wandered too far afield from the topic at hand. Dialogue with Gail on Town issues was always firm, frank and fair, and I shall miss her powerful presence in the chair to my right very, very much.”

U.S. Rep. Lois Frankel, D-West Palm Beach:
“She perseveres on her issues. She is very diplomatic. In the political world we live in, with so much acrimony, Gail is very bipartisan. She is just a lovely person to work in the trenches with.”

Richard Kleid, zoning commissioner and former council president:
“Gail at times acted as the mother hen, admonishing council members, when the discussion became heated, to cool it down. She was a tireless advocate and proved adept at dealing with other governmental agencies. Gail knew the pulse of the community and used it well as an ombudsman.”

Town Councilwoman Bobbie Lindsay:
“Gail Coniglio’s voice and leadership has represented the town as a mother, business person, wife, partner, protector of our shoreline and a fierce and persistent advocate for Palm Beach. In her long tenure as mayor, she proved extremely able, politically astute and willing to tackle the many important issues and pressures facing our fragile barrier island. She accomplished much, and mostly with a smile and charm defined by her positive, can-do attitude.”

Danielle Moore, new mayor and former council president:
“I think the work she pulled off with the U.S. Army Corps and the federal government on the [extended Midtown] beach renourishment is five-star. And the beach management agreement [with the state], and the work she did with Lois Frankel to secure the $25 million grant. That took a lot of work on her part, along with [Coastal Manager] Rob Weber and the staff, all while balancing the responsibilities of a business and a family. It’s really wonderful.”

Michael Pucillo, former council president:
“When Gail became mayor, we were not getting much help from the state government and very little or nothing from the federal government in financial support for beach renourishments. She has turned that around and gotten us a lot of help. She has tirelessly represented the town’s interests well with other communities. She did it with a very thoughtful, positive and non-confrontational approach.”

Town Attorney John Randolph:
“Gail, you and I have worked together for a long time, which has given me the opportunity to closely observe your love for the town and its residents. Your selflessness and personal sacrifice on behalf of the town are unparalleled. Congratulations on a job well done and best wishes in our future endeavors.”

Mary Robosson, president of the Palm Beach Civic Association:
“The late Stanley Rumbough introduced me to Gail almost 30 years ago. Stan held Gail in the highest regard and encouraged our residents to take note as I too witnessed Gail’s service to our town from the Rec Center Commission, to council member, to being elected, then re-elected four times as our great mayor. If we all attempt to exercise a fraction of Gail’s gifts of knowledge, poise, sincerity and friendship, then we too will continue serving 33480 with gratitude and in honor of a remarkable person, leader and friend. We thank you Gail.”

David Rosow, former council president:
“Gail is the Energizer Bunny who multi-tasks with the best. She’s a wife who cared for her husband, Frank, a mom, grandmother, the breakfast waitress at Cucina and of course the mayor of Palm Beach. It was a pleasure to serve with her during my years on the council and I have the greatest respect for all she has accomplished!”

Rene Silvin, chairman of the Landmarks Preservation Commission:
“The positive results of Gail’s tireless and competent work for our town will be felt for decades and assures her legacy as a great mayor. Importantly, she conducted her duties with civility and compassion and will always hold a special place in my heart.”

Amanda Skier, executive director of the Preservation Foundation of Palm Beach:
“Gail has been a true partner and contributor to the Preservation Foundation’s accomplishments during her tenure. From the very beginning of our Bradley Park beautification project, Gail was there every step of the way. She helped guide us through the challenges we encountered and connected us with individuals and organizations to ensure the project’s success. We have always been able to count on her support … The Preservation Foundation is profoundly grateful for her leadership and friendship throughout the years.”

ARCOM Chairman Michael B. Small and Ann Small:
“Gail, you are our hero and our friend. We are so very proud of you. You have done so much for our town and made it such a better and more beautiful place to live in. We are so thankful for your service and all you have done for all us residents.”

Robert Wildrick, former council president:
“For seven years I had the pleasure of working with Gail, either as a council member or mayor. I found her to be delightful. She was calm during debates. She always had a point of view and, whether one agreed with her or not, she always conducted herself like a lady. It was an honor to work with Gail.”

Bob Wright, chairman and CEO of the Palm Beach Civic Association:
“She is a very special person because of all the service she put into the town over many years, especially the last years as mayor. She accomplished a great deal. She represented the town beautifully with other municipalities.”

Town Council President Margaret Zeidman:
“I learned a lot from Gail. She could find the ‘sweet spot’ that settled differences. That’s a much-needed skill as a politician. And I think what strikes me most was her warmth toward others. That combination of skill and ‘heart’ is a rare gift. And it is genuine with Gail.”