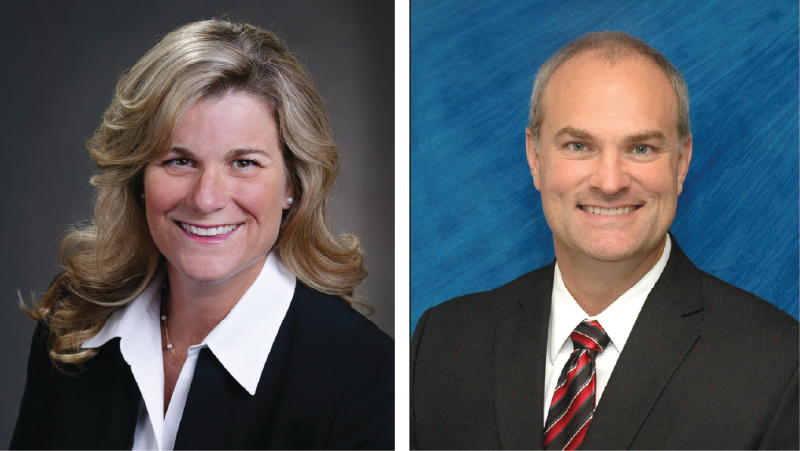 The Town of Palm Beach now has two new deputy town managers, each with broad oversight, as part of a realignment of duties at Town Hall.

One is a new face in town, while the other is familiar.

Town Manager Kirk Blouin has named Bob Miracle to the new position of deputy town manager – finance & administration. Miracle’s post will absorb the position of finance director, which won’t be filled after Jane LeClainche retires at the end of the year, Blouin said.

Stone and Miracle were named to their new jobs following a national search to replace Jay Boodheshwar, who was deputy town manager from 2015 until last June, when he left to become city manager of Naples.

Miracle most recently served as deputy chief financial officer for Mecklenburg County in Charlotte, N.C. He is a certified public accountant with more than 25 years of experience in finance and administration.

Stone joined the town in June 2019 as director of business development operations. Her duties initially included oversight of the Town Marina, including its $38 million reconstruction last year, and oversight of the Par 3 Golf Course, tennis and other recreation programs.

Stone was promoted to assistant town manager in March 2021.

Stone will continue to oversee the marina and Recreation Department. Earlier this year, Blouin put her in charge of the town’s People & Culture Department, formerly known as the human resources department. With this most recent promotion, Stone also supervises the town manager’s office and the town clerk’s office.

Before joining the town, Stone was the vice president for intercollegiate athletics at Palm Beach Atlantic University for more than seven years. Prior to that, she was parks and facilities manager for the Village of North Palm Beach.

Blouin said Boodheshwar’s departure opened an opportunity for him to reorganize the administrative leadership team. He said Miracle’s position is a combination of Boodheshwar’s old job and the finance director’s position.

“You have to have a very strong knowledge of finance, and you need to be a CPA,” Blouin said of Miracle’s post.

Stone’s new position is more administrative in nature and fits her skill set perfectly, he said.

“Carolyn and Bob are both proven winners – seasoned executives with a track record of success in all the places where they have been,” Blouin said.

Miracle was introduced to the Town Council at its Nov. 8 meeting.

“I certainly look forward to working with all of you,” he told Mayor Danielle Moore and the council.

In an interview later, Miracle said the town staff, elected officials and citizens have been very welcoming to him.

“I’m just really excited to hit the ground running,” he said. “Palm Beach is a unique and special place. It’s really kind of majestic, to be honest.”

Stone said she’s honored to serve the town and to work alongside so many dedicated colleagues.

“I’m very focused on continuing to develop and build an amazing team to serve our Town Council and residents,” she said. “I am grateful to Kirk Blouin for providing this opportunity.”