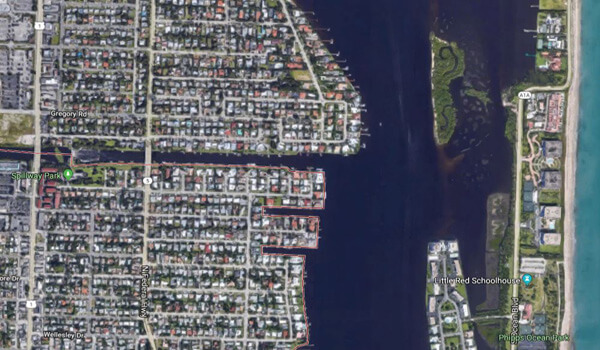 The Palm Beach Civic Association office has received several inquiries regarding blue-green algae in the Lake Worth Lagoon and Intracoastal from our members and Directors. A greenish substance was observed by members and photographed in the Intracoastal. Ms. Bates responded that they had not released water into the C-51 Canal from Lake Okeechobee and don’t see a need to in the near future. She said Lake O water is being directed south.

Mr. Weber responded in an email as follows:

“Blue-green algae is currently not a problem in the Lake Worth Lagoon and is not threatening our beaches.

Testing results are reviewed by the Florida Department of Health and notices to the public are provided, if necessary. Any sightings of blue-green algae should be reported through FDEP using the following link: https://floridadep.gov/dear/algal-bloom or calling FDEP at (855) 305-3903.”

In the meantime, the Civic Association will continue to watch the waterway.

A sample taken just feet away from there last week was not toxic, according to the Florida Department of Environmental Protection.

Microcystin, the toxin in the blue-green algae, can cause nausea and vomiting if ingested and rashes and hay fever symptoms if touched or inhaled. Drinking water with the toxin can cause long-term liver disease.

“Our health and human safety here is not mentioned at all when it comes to Lake Okeechobee, and that has to stop,” the Palm City Republican said at a Tuesday news conference to unveil his bill. “What we’re demanding is that we be given priority as well.” The U.S. Army Corps of Engineers just announced today that water flows from Lake Okeechobee will continue into the Caloosahatchee and St. Lucie rivers until further notice.

The Corps announced Thursday that the water flow at W. P. Franklin Lock and Dam will be a constant 3,000 cubic feet per second (cfs).

That’s higher than the previous 14-day average set on August 24th of 2,000 cfs on a pulse schedule.

They are however reducing the amount flowing in pulse releases into the St. Lucie River from 1,500 cfs over the last two weeks to 1,170 cfs over the next seven days.

According to the Corps, Lake Okeechobee is currently at 14.66 feet above sea level, almost a foot higher than it was at this time last year. During the past week, lake levels rose 0.06 feet, with a 0.27 foot rise in the past 30 days.

The current potential for hurricanes, now in the peak of the season, is a threat to the water levels in the lake.