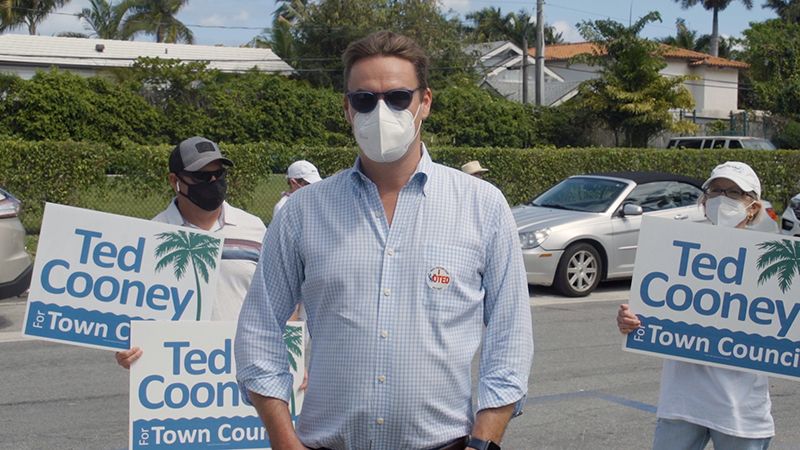 When he’s sworn to a Town Council seat on April 13, Ted Cooney will be the newest and, at age 35, the youngest face on the board.

Despite his relative youth, the third-generation Palm Beacher said he’ll be ready to hit the ground running.

During his campaign against Candace Rojas, his opponent in the March 9 town election, Cooney pointed to his 11-year record of service on the Landmarks Preservation and Architectural commissions, and said he understands the town’s challenges and priorities.

“I don’t need on-the-job training,” he said. “I’m ready to serve on day one. I respect our town’s traditions and will continue to advance them on the Town Council.”

A lifelong resident who worked at Buccan restaurant for six years before becoming a Realtor last year, Cooney breezed past Rojas, a small business owner who recently moved to town, in the election. He claimed 81 percent of the vote, or 2,369 ballots to her 547. It was his first bid for elective office.

In a sense, Cooney has been preparing for this moment for most of his adult life. His passion for town history and architecture served him well on the landmarks commission, which he joined in 2010 after being appointed by the council at age 24. The following year, his peers named him as their chairman for the first of eight times.

“Mr. Cooney has shown us during his tenure on the commission that he has great capacity for research and a great ability and willingness to learn,” Cooley said at the time.

Years later, when Cooney’s tenure on the board ended in early 2020, commissioners heaped praise on him for leading with integrity and cultivating a harmonious atmosphere.

Rene Silvin, who succeeded Cooney as the board’s leader, called him a “fabulous chairman,” noting how he held his opinions to himself until the other commissioners finished debating.

“He never shows emotion,” Silvin said. “He is eloquent and rational, and everything he says is based on facts.”

After leaving the landmarks board, Cooney served during the last year as alternate member of the Architectural Commission.

He has spoken fondly of his years growing up in the North End, when he used to ride his bicycle all over town. He has lived on the island his entire life, aside from a couple of years studying art history, architectural history and other topics at Vassar College, the private liberal arts school in Poughkeepsie, N.Y.

“I’ve always loved history,” Cooney said in an interview during his early days on the landmarks commission. “I always wanted to hear stories from family, friends, anyone. I remember from a young age being really interested in the architecture (and) going to homes and public buildings in town.”

Cooney and his brother Jack, an investment manager who lives in Palm Beach, are the sons of retired anesthesiologist Dr. John Cooney and retired Hospice of Palm Beach County physician Dr. Gail Cooney.

John Cooney grew up one of eight children in a large Irish Catholic family on the ocean block of Dunbar Road. His parents, Dr. James Francis Cooney and Rosemary Kuhn Cooney, moved to Palm Beach in the 1950s. James Cooney was the chief of neurosurgery at St. Mary’s Medical Center.

During the campaign, Cooney said he wants to be the voice on the council for a younger generation of Palm Beach residents.

He said his priorities will be to preserve the quality of life in Palm Beach, practice strong fiscal management, and maintain an active coastal management program that includes preparing the island for sea-level rise.

At the April 13 council meeting, he will take the Group 1 seat being vacated by Danielle Moore, who will be sworn that morning as the town’s next mayor. Moore, the daughter of former Mayor Lesly Smith, will succeed Gail Coniglio, who is stepping down after 10 years at the post.

Congilio said she has known Cooney all of his life and was happy to serve as treasurer for his campaign. She described him as “courteous, respectful, prepared, articulate, knowledgeable” – someone who she said builds consensus through measured deliberation.

“I know that he will serve admirably and will be a valuable asset to the [council] and the town,” Coniglio said.