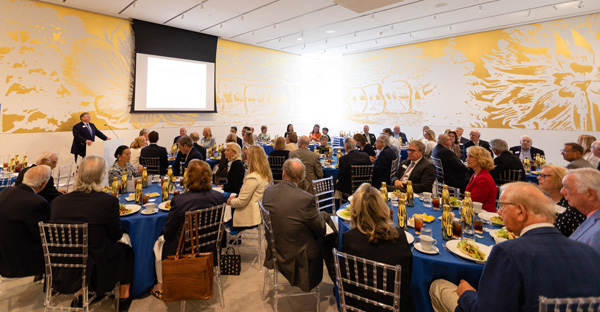 Elliot Bostwick Davis, recently appointed executive director and CEO of the Norton Museum of Art, spoke to 75 Palm Beach Civic Association directors and guests during a March 28 luncheon at the museum as part of the Civic Association’s 75th anniversary season celebration.

The “new” Norton reopened on Feb. 9 after completing a six-year, $112 million renovation/expansion project.

Civic Association Chairman and CEO Bob Wright welcomed everyone to the luncheon and thanked Palm Beach Island Hospice Foundation for sponsoring the event. Mr. Wright recognized Civic Association President Ned Barnes for his 25 years of service to the organization.

Guests were served free-range chicken paillard with a cookie trio and fresh berries for dessert.

Mark Cook, board president of Palm Beach Island Hospice Foundation, spoke about the work the organization does to provide resources for programs that support end-of-life care for 2,000 patients a day and their families.

Bruce Gendelman, first vice chair of the Norton Museum Board, introduced Ms. Davis. He said the Norton board decided to “swing for the fences and hire one of the most important architects in the world, the genius Lord Norman Foster,” to design the renovation/expansion. He described Ms. Davis as the “genius counterpart to Foster’s vision.

“We hoped that if we built it, they will come,” Mr. Gendelman said. “Fast forward six years and here we sit today. This museum was able, with great dedication, to fully raise the $112 million it took to complete this project and attendance has been overwhelming. We’ve had 340 important new pieces of art donated to our collection.”

The Norton had 8,500 visitors on Feb. 9, the day it reopened to the public, and has passed the 60,000 mark to date, she said. The museum features more than 7,600 works of art in five curatorial departments.

Ms. Davis gave a brief history of the Norton, which originally opened Feb. 8, 1941 by Ralph and Elizabeth Norton with 740 pieces of art. It was called “the gift of greatest importance to the cultural life of our community.” After Elizabeth Norton died, Ralph Norton remarried. His second wife, Ann Norton, was a sculptor, who gave the community the Ann Norton Sculpture Gardens.

The new Norton moved the entrance to Dixie Highway and is flanked by an 80-year-old Banyan tree to the left and a 19-foot 4-inch typewriter eraser sculpture to the right.

“I think it’s such a brilliant choice,” she said. “The typewriter eraser, in many ways, is a symbol of creativity. It’s helping us to solve problems in new creative ways by erasing, editing, and continuing to refine … If you think about this juxtaposition – on one side you have the great tree and the other side art – nature and art.”

Ms. Davis said she thinks of the many gifts of art that have been donated to the Norton as a tiny pebble that you drop in a pool of water and the tiny pebble creates ripples that take us beyond our imagination.

“It’s a very exciting moment for all of us in thinking about the future of museums and especially the new Norton Museum of Art and it’s important role in our community and our culture,” she said. “Together, I hope we will make the Norton one of the nation’s leading museums, where one can relax and recharge, gather, discover something new, have a conversation, participation, or just get inspired … Fridays and Saturdays are free to the public.”

Directors were offered tours after the luncheon.

For more information about the Palm Beach Civic Association, visit palmbeachcivic.org or call (561) 655-0820.