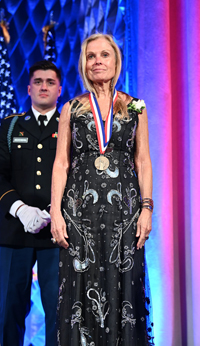 And the setting could not be more moving, in Ellis Island’s Great Hall, the original registry room that served as the gateway for 12 million immigrants to the United States.

For 33 years Americans from all walks of life have received Ellis Island Medals of Honor, which exemplify the values of the American way of life.

From 1892 to 1954 Ellis Island, in the shadow of the statue of Liberty welcome 12 million immigrants into a new land….

And Mr. Ainslie was at the 2019 Ellis Island Medal of Honor Gala this month to receive his award.

“I’ve spent a life committed to causes having to with education,” Mr. Ainslie said. “ I was the founding chairman of the Posse Foundation. Posse sends kids to universities and we’ve sent over 9,200 kids to some of the most elite universities. I think that was probably the significant contribution that qualified me for this this award.”

Mr. Ainslie and the Panattoni’s are in good company. Past medalists include seven presidents, Nobel laureates, artists, athletes, and educators.

“It made me proud to be an American,” said Mr. Ainslie. “You realize when you hear 90 people’s descriptions of their past you realize we are a country of immigrants. Everybody came from somewhere else. Ginni Rometty, the CEO of IBM. Her family, her mother and grandmother, came from Lithuania. Dr. Sanjay Gupta, his mother came from India. You see story after story and that made you realize what a rich country we are because of the blending of nationalities that is America.”

And what more stirring location than in the shadow of the Statue of Liberty, the symbol of American acceptance and exceptionalism.