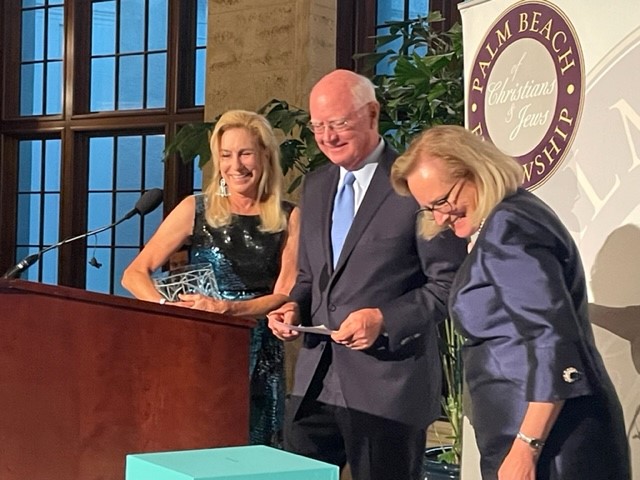 The Palm Beach Fellowship of Christians & Jews has honored Michael Ainslie, an accomplished fundraiser and a passionate philanthropist and community leader, with its 2022 John C. Randolph Award.

Ainslie, a retired business executive who is treasurer of the Palm Beach Civic Association, received the Randolph Award Wednesday at the fellowship’s annual dinner at The Breakers.

The award was given out by fellowship Vice Chairwoman Margaret Zeidman, who said Ainslie worked tirelessly to build community support and raise funds that helped make the Morton and Barbara Mandel Recreation Center a reality in 2019.

“It was his patience and grace that endured through 19 public meetings,” Zeidman said of Ainslie. “Michael was the wind beneath the wings that got the project through.”

“Michael’s life is, by example, a confirmation of what it means to do good in the world,” Zeidman said.

With his wife Suzanne at his side, Ainslie received the award before an audience of about 180 people.

Ainslie said Randolph is a longtime friend who has done much to make Palm Beach a better community, and that being honored with the Randolph Award is especially meaningful for him.

“I’m a glass-half-full kind of person,” Ainslie said. “I love helping others and particularly organizations that need some help. I love complexity and challenge. I love fundraising, which I view as sharing my passion with others so they can get enjoyment. I choose to always try and have a positive attitude.”

Ainslie added, “I look around this community and see those whose lives I’ve touched and it really warms my heart.”

The non-profit Palm Beach Fellowship of Christians & Jews was founded in 1993 as a grassroots effort to bring people of different faiths and cultures together to develop a better understanding and appreciation between them.

The Randolph Award was established to honor persons or organizations in the community who exemplify the fellowship’s mission. It was named for John “Skip” Randolph, who has chaired the organization throughout most of its 29 years. Randolph was the first recipient of the award in 2004.

In an interview earlier Wednesday, Randolph said Ainslie is highly deserving of the honor. “He emulates the ideals of the fellowship,” Randolph said. “He is a kind and caring individual.”

Ainslie is trustee emeritus at Vanderbilt University, where he earned his bachelor’s degree in economics. He holds a Master of Business Administration degree from Harvard Business School.

Michael and Suzanne Ainslie have been Palm Beach residents for around 25 years.

The annual fellowship dinner was not held in 2020 or 2021 because of the Covid-19 pandemic, and there was no Randolph Award recipient in 2021. The 2020 Randolph Award was given posthumously to the late Barbara and Morton Mandel.