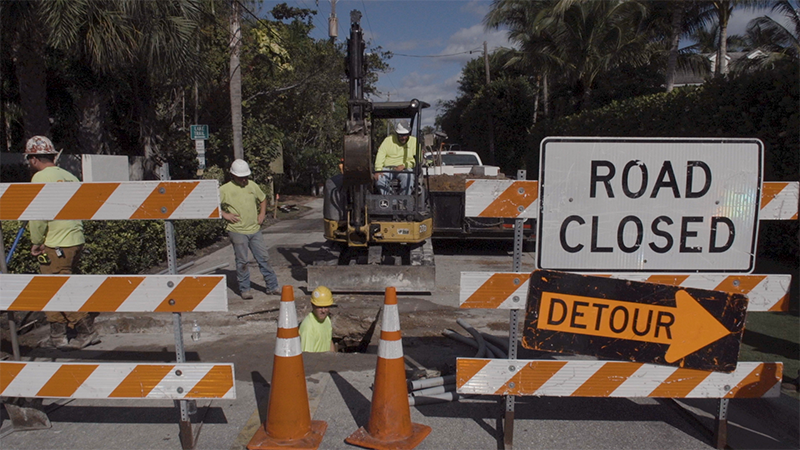 The sprawling network of water distribution lines buried throughout Palm Beach belong to the City of West Palm Beach, which supplies the town’s water through a retail franchise agreement.

The town is legally entitled to assume ownership of the water lines as of 2029, when its 30-year agreement with the city expires.

But that ownership includes responsibility for the upkeep of those aging pipes, some of which are around 70 years old and approaching the end of their useful life, a Town Council committee learned Tuesday. Public Works Director Paul Brazil suggested it may be a good idea to accelerate the pace of the pipe replacement.

“The pipes are old,” Brazil told the Public Works Committee. “They’re not failing. [But] it would be smart to start programming their replacement.”

The committee is made up of Councilwoman Bobbie Lindsay, who chairs it, and Council President Margaret Zeidman.

Maintenance of the water supply lines is a continuous multi-million-dollar effort, Brazil said. Ultimately, it is paid for by the water customers of the town.

As part of the 1999 agreement with the town, the City of West Palm Beach agreed to spend millions of dollars in bond money to replace the most critical of the aging pipes, Town Engineer Patricia Strayer said. That commitment included 84 projects and was capped at $18 million, all of which was spent by the end of 2004.

Since then, another $11 million has been spent on pipe replacement through a repair and replacement fund that is funded from town customers’ water bills, Strayer said.

That fund is essentially depleted but is replenished at the rate of about $1 million annually, Strayer said. It is currently being used to finance a $2 million pipe replacement along the length of Australian Avenue. Next is a scheduled replacement of another aging line along Cocoanut Row between Royal Poinciana Way and Barton Avenue, she said.

“We’re spending it as fast as we’re banking it,” Strayer said.

To quicken the pace of the pipe replacement, the town would have to renegotiate the franchise agreement with West Palm Beach to raise the fee that customers pay and thereby increase the amount of money flowing into the repair and replacement fund, according to Zeidman.

The water comes from West Palm Beach into Palm Beach through five pipeline crossings beneath the Intracoastal Waterway. According to a city inventory, there are 72 miles of water distribution lines in the town. There are 3,411 residential customer accounts, including 290 dedicated to irrigation, according to a water feasibility report from Kimley Horn & Associates, a town engineering consultant.

The water distribution system in the town dates to the 1940s or before. All water mains installed on the island before 1960 are asbestos-filled concrete or cast iron. After 1960, they were made of ductile iron or PVC, said Jason Lee, an engineer with Kimley Horn.

Lindsay called the town’s water system “ancient” and asked Lee about the safety of the asbestos concrete pipes. Lee said the asbestos is only a safety issue when the pipes are removed because the asbestos dust could become airborne. To prevent that, the pipes are kept damp during removal and bagged before disposal at a landfill, he said.

The town is exploring its options for a future water supply after the agreement with West Palm Beach expires. It must notify the city of its intention by October 2027. If it needs more time to reach a decision, the town has the option of renewing the existing agreement for five years at a time, up to 20 years, Zeidman said.

But if the town were to enter a partnership with the city’s water utility – something it is considering doing to address water quality concerns – then the town would take ownership of the distribution lines on the island, Zeidman said.

Other options under consideration include purchasing water from another provider, such as Palm Beach County or Lake Worth Beach, or developing a town-owned utility and treatment plant that could be built in Palm Beach or in West Palm Beach. Under those scenarios, the town would assume ownership of the water distribution lines on the island, Brazil has said.

“Today, you don’t own them,” he told the committee. “There are alternatives where you would own them.”