Our Town with William Kelly: Building a better environment – one day at a time 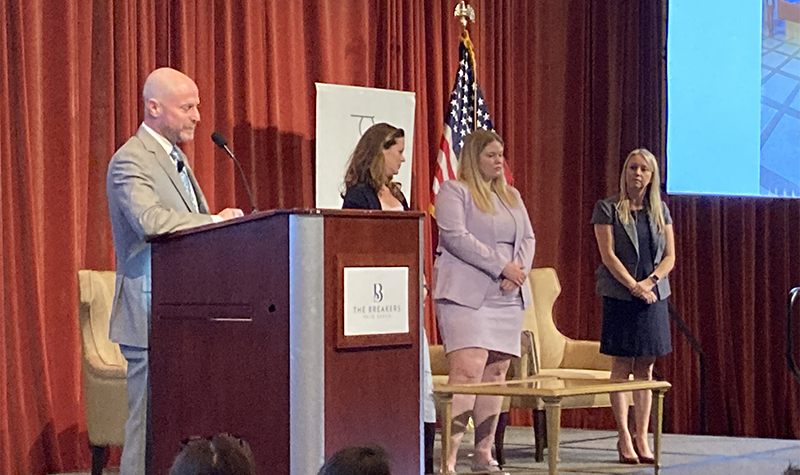 Good environmental stewardship may be a popular concept, but the reality of making it happen, one solar panel or electrical vehicle at a time, is a job.

An audience of more than 400 people at the Palm Beach Chamber of Commerce breakfast at The Breakers on Thursday heard from four environmentalists who are engaged in the day-to-day work of pushing for better environmental practices.

The presentation was moderated by Terry Gibson, who is the Florida programs leader for DEPLOY/US, an organization that works to promote durable governmental policies for addressing climate change.

The speakers were Nicole Kirchoff, a board member with the American Water Security Project; Claire Alford, who performs market development for Highland Fleets electrical vehicles; and Kate Wesner, Florida director of the American Flood Coalition.

Kirchoff said septic tank effluent is an enormous problem in Florida, flowing into the state’s waterways and ultimately into the Atlantic Ocean.

But the Clean Waterways Act, passed by the Florida Legislature with bipartisan support in 2020, has provided hundreds of millions of dollars aimed at minimizing known sources of nutrient pollution, Kirchoff said.

“We have this massive problem right under our feet, that we all contribute to, and we can do something about it,” she said.

Gibson said the Clean Waterways Act is a success story, though few people know much about it. “It’s working, but it’s all underground,” he said. “It never gets any press.”

Alford cited a New York Times article that said 2022 is a critical year for the future success of electric vehicles.

“We are in a race to catch up to Europe and Asia,” she said. “Some say electric vehicles are the biggest upheaval [for the auto industry] since the Model T over 100 years ago.”

The demand is there. All-electric car sales increased 60 percent to nearly 160,000 in the first quarter of this year. The auto industry is on track to invest $500 billion in the next five years to make the transition to EVs, according to Alford.

Florida is second only to California in state-by-state sales of electric vehicles, she said.

But there are obstacles to continuing growth. Demand for lithium needed to produce the rechargeable electric batteries is increasing exponentially; prices doubled between 2016 and 2018. Supply chain gaps and the Russia-Ukraine war have added to the difficulties, Alford said.

Many more charging stations are needed. Utilities can help with this problem by taking a more active role, she said.

Wesner said the American Flood Coalition is partnering with more than 200 local governments in 21 states to advocate for “natural solutions” to flooding and sea level rise.

Florida’s coastal cities, including Miami, Tampa, St. Petersburg and Tampa, are among the municipalities most vulnerable to the growing threat of sea level rise, she said.

Sea level rise threatens the state’s tourism industry, which employs one million people, Wesner said. The state’s second largest industry, agriculture, is at risk because of changing rainfall patterns and rising groundwater levels in some parts of the state.

It’s critical for the state to invest in infrastructure that boosts the economy and protects property values, Wesner said. Local communities must deploy smart planning and, when hit with floods, build back stronger for the future.