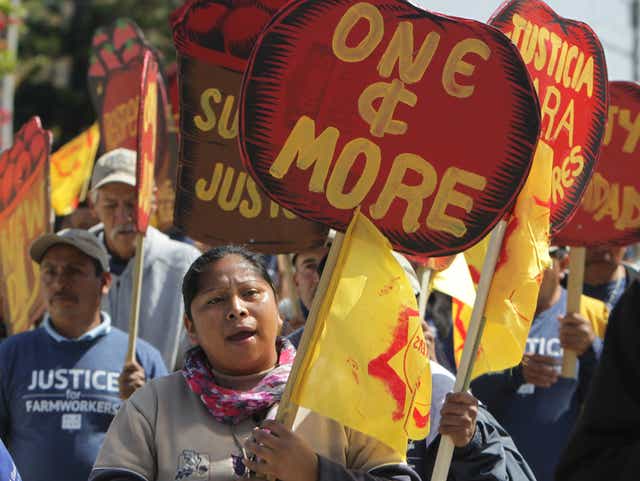 Residents should be prepared for traffic congestion on Saturday when hundreds of protesters are expected to march on the streets of Palm Beach.

The Coalition of Immokalee Workers, which staged a peaceful march in Palm Beach in 2016, is protesting what it regards as unfair wages for farm workers.

The coalition calls itself a “worker-based human rights organization” based in Immokalee, Fla. in Collier County.

The coalition is expected to bus between 500 and 800 people across the Flagler Memorial Bridge and into Bradley Park, where the event is scheduled to begin at 11:30 a.m., according to Palm Beach police.

From Bradley Park, the group will march on foot down the 200 block of Sunset Avenue, on South County Road to Worth Avenue, west on Worth Avenue to South Lake Drive, and then pause at Lake Drive Park beside the Town Marina, police said.

The marchers will then cross the Royal Park (middle) Bridge into West Palm Beach and re-enter Palm Beach across the Flagler Bridge and finish the event at Bradley Park, where they will be bussed out of town.

The town is legally obliged to allow marchers to use the streets provided that a traffic lane remains open to motorists, police Capt. Will Rothrock said.

“There will be multiple roads that will be affected,” Rothrock said. “We are well prepared for it. We will have multiple officers there to mitigate any traffic woes that arise. There are no known security issues at this time. We believe it will be a peaceful march.”

Police do not anticipate any road closures and will strive to keep one lane of traffic open at all times, Rothrock said. But traffic will move slower than normal.
It’s expected that the march will start around noon and be completed by around 5 p.m., he said.

The buses that bring the marchers on and off the island will not be parked in town during the hours while the march is occurring, Rothrock said.

The town cannot prohibit groups from staging protest events on the island because that would violate their constitutional right to free speech under the First Amendment. But the town does attempt to regulate parades and demonstrations through its ordinances.

In 2016, the coalition sued Palm Beach in federal court, accusing the town of maintaining unconstitutional ordinances that make it impossible to stage a protest.

A judge enjoined the town from prohibiting the group’s use of a decorated flatbed truck and from regulating noise levels during the march, saying the noise restriction would have prevented the group from carrying out its message.

Attempts to reach a spokesman for the coalition were not immediately successful. On its website, the coalition refers to Saturday’s protest as part of its “march to end modern slavery in the fields.”

It is demanding that food chains increase wages for farm workers by participating in the Fair Food Program, in which they pay an extra penny per pound of tomatoes harvested.