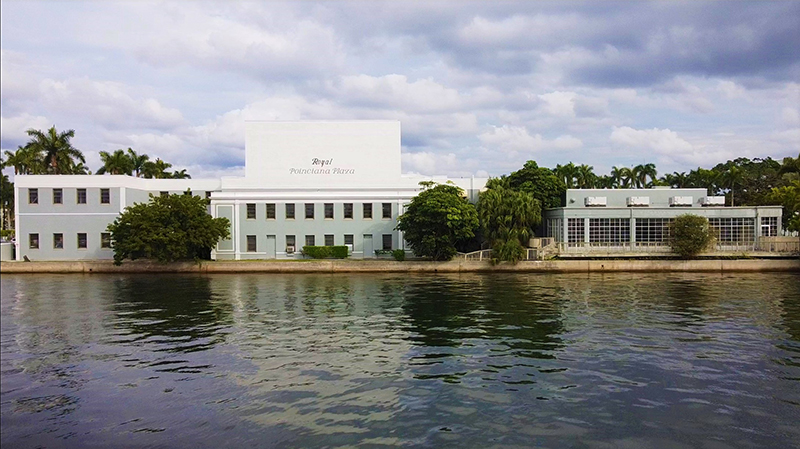 The Town Council unanimously denied on Wednesday an appeal of the Landmarks Preservation Commission’s Feb. 16 approval of a plan to renovate and reopen the long-shuttered Royal Poinciana Playhouse.

Simon Taylor, president of the non-profit Palm Beach Theater Guild, argued that the landmarks board failed to follow due process and town law when it voted 7-0 in favor of the renovation plan.

The landmarks commission’s authority is over proposed changes to the exterior architecture of the playhouse and other buildings within the Royal Poinciana Plaza, which were landmarked in 2007. Final approval of the playhouse renovation plan is in the hands of the Town Council, which oversees property use and zoning rules.

The application for the project was submitted to the town on behalf of WS Development and Up Markets, which manage the plaza under a long-term lease.

Designed by architect John Volk in 1958, the playhouse thrived for decades but has been vacant since the last tenant pulled out in 2004.

Taylor has long argued that the 860-seat playhouse would thrive if it were reopened under a new operator. The plaza management, however, says the theater is too large to be competitive in today’s market. It is proposing to demolish and rebuild the interior with up to 400 collapsible seats for greater flexibility of use.

The theater guild sued the town in 2016 in an unsuccessful attempt to overturn zoning approvals that allowed the plaza to reduce the theater’s seating capacity to 725 to allow for more parking to accommodate a restaurant at the plaza.

On Wednesday, Taylor, who is an attorney, threatened new litigation if the council didn’t quash the landmarks board’s approval of the renovation plan or remand it back to that board for a second review.

‘We will sue,” Taylor said. “I can do that. We are completely prepared.”

But council members said they could find no merit in any of Taylor’s allegations.

Town staff said it met due process guidelines because the public was properly notified that the playhouse application would be considered at the Feb. 16 meeting.

“To me, this looks like ‘Simon says,’” Councilman Lew Crampton said. “Simon says one set of facts and our staff says another set of facts … it looks to me like this appeal has no basis in fact.”

In rejecting the appeal, the council found that the landmarks board followed town criteria when reaching its decision and that there was “competent, substantial evidence” in support of that decision.

James Crowley, the attorney representing the plaza management, noted that Taylor was not present at the Feb. 16 commission meeting and that no one spoke against the application, though Taylor submitted a letter to the town in opposition.

“Mr. Taylor is not an architect,” Crowley said. “No one challenged the architecture at the meeting.”

Taylor said he could not attend the Feb. 16 meeting because he was recovering from surgery. The meeting was held in-person at the meeting chambers in Town Hall, without virtual participation through Zoom (the council in January terminated virtual participation at town board meetings, citing the improved public health picture relative to the pandemic).

Crowley challenged Taylor’s assertion that the guild can produce experts to testify about the viability of the playhouse as it is currently designed. “If there are so many experts qualified to testify about the theater, why didn’t any one of them show up at the meeting?” Crowley asked.

Mayor Danielle Moore asked Taylor how many members the theater guild has; he replied that it has “a mailing list of 2,000 to 4,000” people.

Moore then said that, according to GuideStar, which is an internet-based information source on non-profit organizations, the theater guild no longer exists.

“According to GuideStar, you have been dissolved by the Internal Revenue Service,” she told Taylor. “Your board of directors all seem to be deceased.”

Taylor then lashed out at Moore and the council, accusing them of “backroom pre-arranged votes” and “rubber stamp votes.”

“This is out-and-out fraud,” he told Moore. “I am a corporate lawyer and I have never even heard of GuideStar.”

Alexandra Clark, vice president of asset strategy and experience at WS Development, said the plaza management worked diligently for seven years to find a theater operator who had the right mix of expertise, passion and capital to make the project work.

“We heard time and time again that the theater is too large to be successful in today’s market,” she said.

WS Development has found a willing operator in town resident Avram “Avie” Glazer, who chairs the publicly held company INNOVATE, which will be responsible for cultural programming under the plan. Glazer and his family are owners of the Tampa Bay Buccaneers and Avie Glazer is co-chairman of the United Kingdom’s Manchester United Football Club.

Besides the theater modifications, WS Development’s plan calls for adding 8,000 square feet to the theater to create a total of 12,000 square feet of retail and gallery space, and renovation of the vacant “celebrity room” on the south side of the building into a 200-seat restaurant with waterfront dining.

Important architectural features, including the theater’s east façade and four statues atop the east façade, and the mural on the ceiling in the celebrity room, will be preserved, Clark has said.

With town approval, groundbreaking could happen as early as this summer and a reopening of the theater could occur before the end of 2023, Clark has said.

Following its rejection of the appeal, the council on Wednesday granted zoning approvals for the project but required the plaza to return at its April 13 meeting with revisions to the proposed valet parking plan for theater events. The council also deferred approval of modifications to the plaza’s 1979 property-use agreement with the town until the April meeting.

Crowley said the plaza, in close consultation with Town Attorney John Randolph, is proposing to remove portions of the agreement that are 40 years old and no longer relevant. But “we’re not rewriting this agreement,” he said.