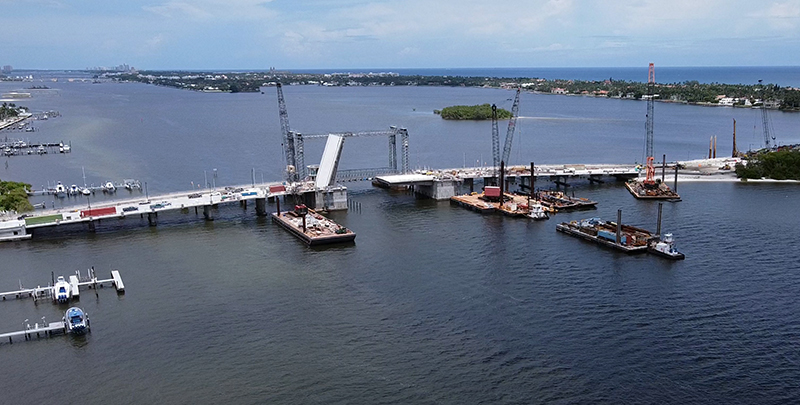 Five years after construction began, the Southern Boulevard Bridge replacement reached a milestone Wednesday when the north side of the companion tide relief bridge was opened to traffic.

The tide relief bridge, which is one of two spans included in the replacement project, was opened to westbound traffic as of 6 a.m., the Florida Department of Transportation said.

The south side (eastbound lane) of the tide relief bridge was completed in November 2020 and traffic was diverted onto it from a temporary span.

The $97 million project began in April 2017. It includes replacement of the existing drawbridge and tide relief bridge over the Intracoastal Waterway and Lake Worth Lagoon between Palm Beach and West Palm Beach.

The tide-relief bridge is the low-level fixed bridge on the Palm Beach side of the Lake Worth Lagoon.

Construction is expected to reach completion in the fall of 2022.

The new drawbridge and tide relief bridge will each carry one lane of traffic in each direction.

The drawbridge will have a vertical clearance of 21 feet, which is four feet taller than the old bridge. The navigable channel is being widened to 125 feet.

Roadway and causeway approaches also are being reconstructed.

The temporary bridge was built north of the existing bridge to maintain traffic while the replacement drawbridge is under construction.