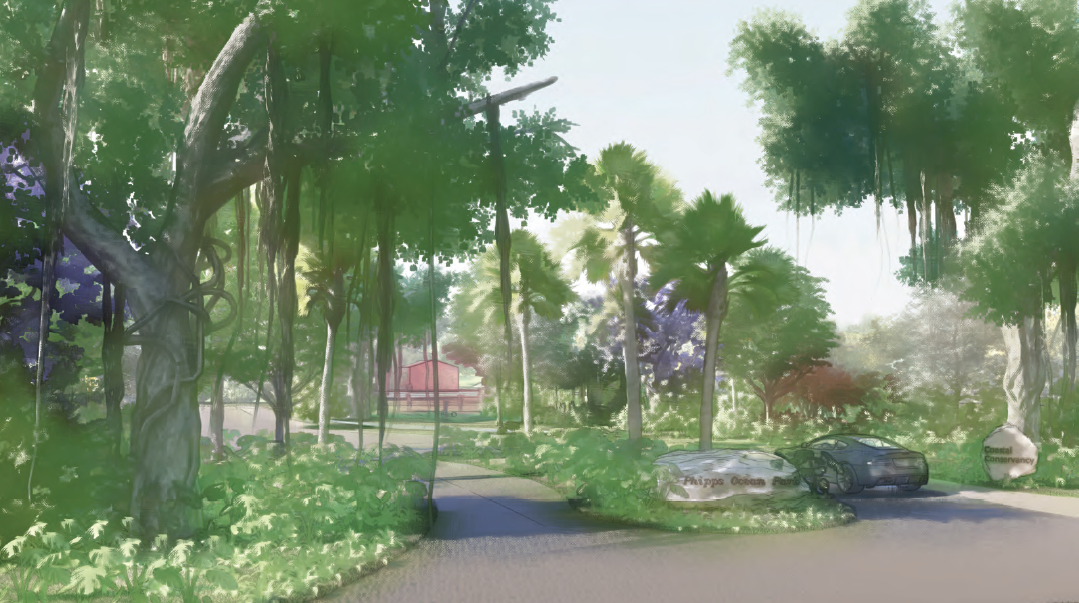 But they were concerned the renovated park, with its native canopy trees, extensive landscaping and gardens, outdoor classroom and other educational and recreational features, might become too popular for the good of the town.

“This is a beautiful [design], but it’s feeling like a destination place,” Councilwoman Julie Araskog said. “How do we limit its attraction to tourists? … We could end up with way too many people.”

Councilman Lew Crampton said South End residents would love to see the park transformed into something more appealing.
“For us living in that area now, it is a total eyesore,” he said. “We in the South End are looking forward to this. It’s going to increase the quality of life, aesthetics and it’s going to enhance education as well.”

Council members called for gates to be installed at the park entrances and said a heightened police presence would be needed to enforce an overnight closing of the park to prevent trespassing, criminal activity and protect neighbors in nearby multi-residential buildings.

Crampton also suggested that town permits for events in the park be strictly limited. “We don’t want to create an attractive nuisance,” he said.

The 18-acre, ocean-to-lake park was donated to the town by the Phipps family in 1948. It has never undergone a redesign and primarily consists of a parking lot, tennis courts, beach access and the 1886 Little Red Schoolhouse.

The Preservation Foundation of Palm Beach is spearheading and raising funds for the $19 million renovation. The foundation also underwrote the $160,000 cost of the Raymond Jungles’ master plan and a park survey.

Amanda Skier, president and CEO of the preservation foundation, said it is on track to reach its $25 million fundraising goal by the end of the 2022-23 season. The $25 million includes a $5 million endowment for the park.

“Bravo to the preservation foundation,” Moore told Skier. “Congratulations on your fundraising.”

In June 2021, the council unanimously gave approval for the preservation to move ahead with the project. Plans call for a more detailed design to be presented to the Landmarks Preservation Commission in October and the Town Council in November, Skier said.

With final town approval, construction would begin in June 2023 with a grand opening of the renovated park scheduled for early 2024, Skier said.

Skier said Tuesday the preservation foundation wants feedback from the council regarding a proposed donor recognition plan, the town’s commitment to annual maintenance, and the removal of invasive plant species and iguanas.

The preservation foundation is asking the town to commit $300,000 a year for annual maintenance.

Crampton and Councilwoman Bobbie Lindsay both said that shouldn’t be a problem considering that paid parking revenue from the park already generates $200,000 annually. “We will get more parking revenue because [the renovated park] will be busier,” Lindsay said.

The donor recognition plan involves the placement in the park of 11 “donor stones,” each bearing an inscription with the name of the person or persons responsible for a donation of $250,000 or more toward the fundraising campaign.

The preservation foundation is asking the town to pay the estimated $170,000 cost of removing invasive plants from the park on both sides of State Road A1A. The cost would include the planting of sea oats on the park’s dunes to keep them stable once the invasives have been removed.

The foundation is asking the town to commit to another $22,000 annually for the ongoing removal of iguanas from the park.

The council agreed to consider the requests.

The redesign plans call for moving the Little Red Schoolhouse to a more visible spot in the park, near the base of a 22-foot beach dune. The schoolhouse will anchor the great “Great Lawn” to the west. The outdoor classroom, designed in collaboration with the Garden Club of Palm Beach, would be north of the schoolhouse.

A wildflower garden would be planted near the north entrance to the park.

Other major elements include a new main entrance, walking paths with educational checkpoints, a dune playground, a “Horizon Plateau” with views of the ocean and west side of the park, and coastal restoration center to educate guests about native plants.

There also would be space set aside for sculptures, a concession area and series of “rain gardens” interspersed with parking islands.

Moore called the outdoor classroom feature “beautiful.” But she said she has “some anxiety” about introducing a concession area into the park. Skier said the concession could help offset maintenance costs while providing water and snacks for families using the park. She also said it is being designed so it could be removed if it presents any problems.

Town Manager Kirk Blouin said he expects that the park will become an attraction, which will require more staff time to meet the recreational and administrative needs. It also will require more attention from law enforcement and emergency responders.

“Just the sheer numbers of people [will lead to] incidents that require additional police and fire-rescue response,” he said.

The town also should be prepared for an increase in litigation. “More people in an area leads to more lawsuits,” Blouin said. 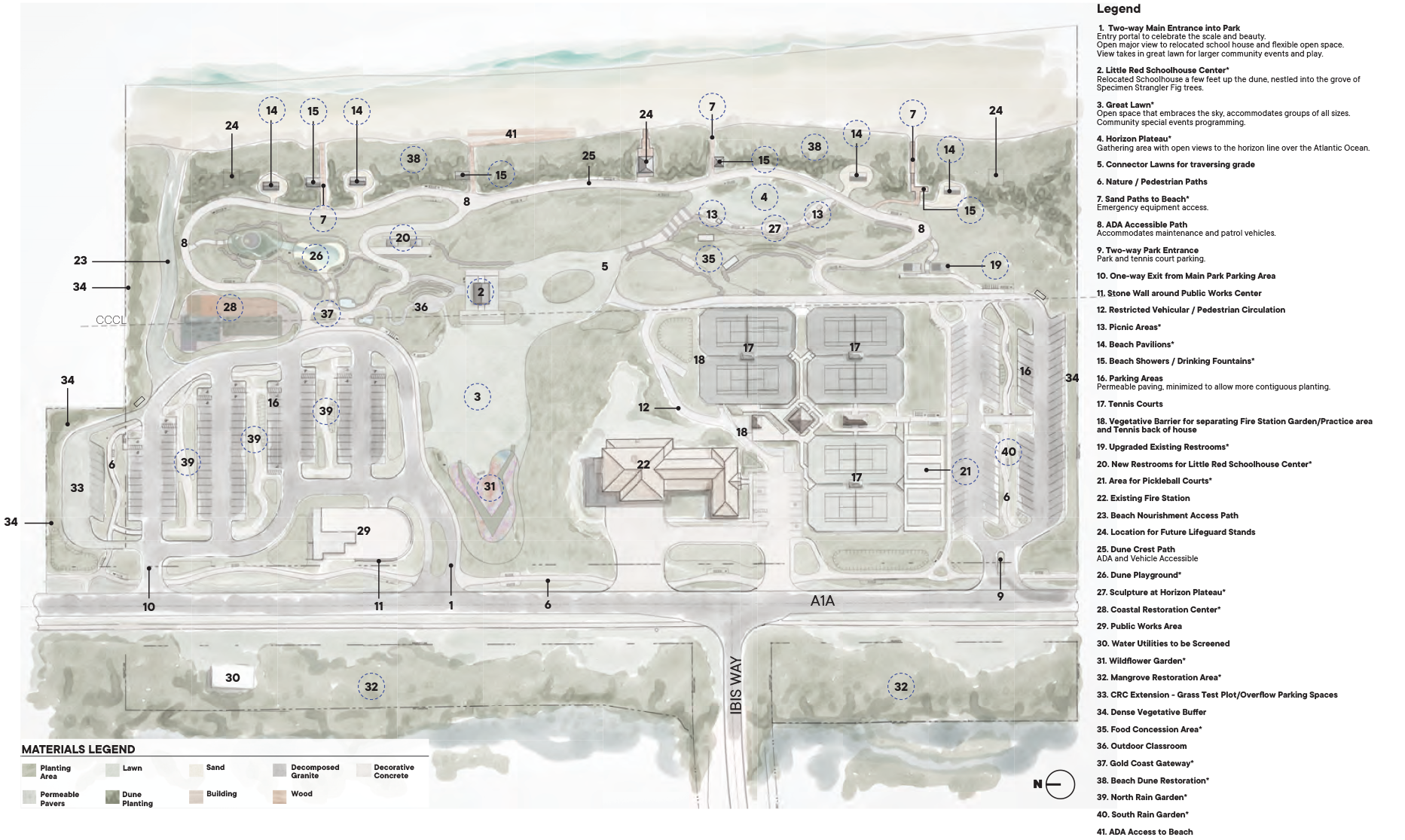