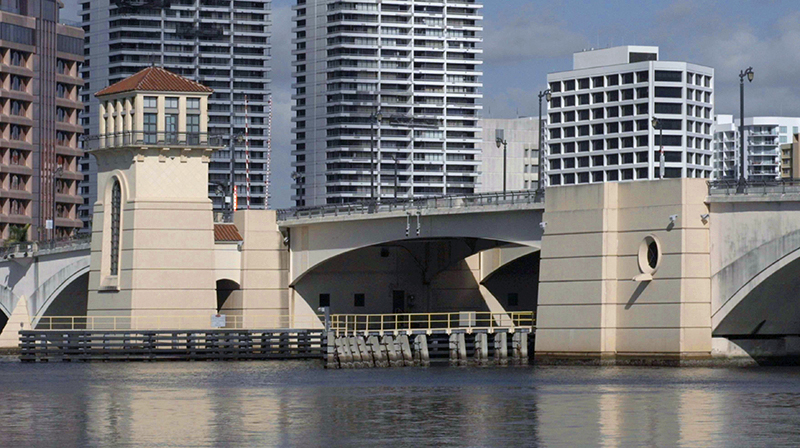 Town officials say they will fight a Florida Department of Transportation plan to restrict westbound traffic on the Royal Park (middle) Bridge so the bridge can be painted beginning this fall.

Work is scheduled to commence Sept. 7 and take up to 300 days to complete, which would be July 2023.

During the work period, one of the bridge’s two westbound lanes will be closed so the contractor can use it to store equipment, according to the DOT.

Town officials say that will result in unnecessary traffic tie-ups when seasonal residents return, and they’re asking the DOT to delay the start of the work until next May.

But the DOT has already awarded the construction contract and, so far, it isn’t budging, Town Manager Kirk Blouin told the Town Council on Tuesday.

The project was originally scheduled to begin in May of this year but was delayed because the contractor had trouble procuring the materials in time, the DOT has told the town. The DOT said the contractor will do its best to complete the painting by Jan. 1, if weather permits.

The Royal Park Bridge is part of a major hurricane evacuation route for the island. The worst hurricanes tend to emerge in September and October – precisely when a westbound lane of the bridge will be closed to accommodate the painting, Mayor Danielle Moore said.

There’s no guarantee the contractor will be able to meet the goal of finishing the work by Jan. 1, she said. If not, it could drag on through the high season.

The council authorized Moore to send a letter on behalf of the town to Gerry O’Reilly, the DOT’s District Four secretary, asking him to grant the delay.

“The town’s population increases significantly from November [to] April, which greatly impacts the amount of traffic across the Royal Park Bridge,” the letter states in part. “ … having a significant portion of the project occur during high season will cause gridlock entering and exiting the town of Palm Beach.”

“We could be ridden out of town on a rail if we don’t do our utmost against this,” Crampton said. “Whatever action we take, we must do with alacrity. This could really come back to bite us.”

Councilman Ted Cooney said the bridge painting is sorely needed. But he said it’s a major transportation conduit and the most frequently used bridge between Palm Beach and West Palm Beach. “During the season, I try to avoid it,” Cooney said. “It’s already congested … this is a pretty serious situation.”

No one from the DOT addressed the council about the project at Tuesday’s meeting. Billy Canedo, the DOT’s District Four communications manager, could not be immediately reached Friday for comment.

The $2.3 million painting project consists of replacing the steel coating on the bridge and clearing and painting the concrete portions of the span, according to a DOT website. The website states that the contractor is Seminole Equipment.

The bridge opened to traffic in 2005.