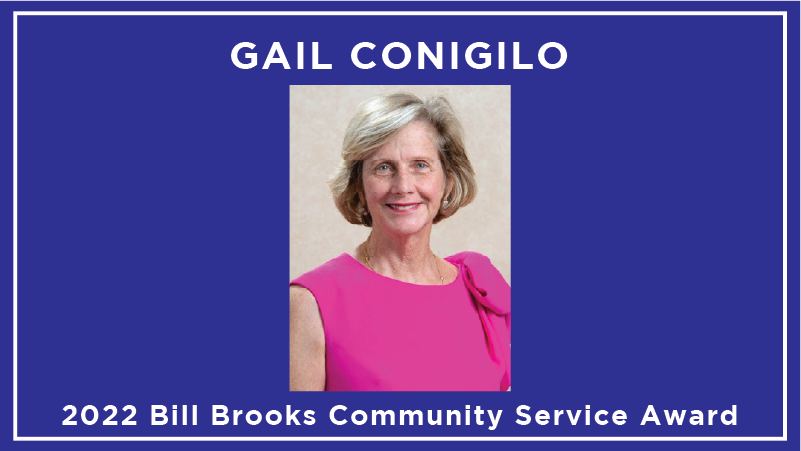 Gail Coniglio, a former mayor who has worked for decades to protect and enhance the town, is the recipient of the Palm Beach Civic Association’s 2022 Bill Brooks Community Service Award.

The honor will be presented to Coniglio at the civic association’s annual award breakfast on Monday, Feb. 28 at The Breakers.

Named for the late Town Council member and civic association director who died in 2010, the Bill Brooks award is given each year to someone who has significantly improved the quality of life in the community.

“The Palm Beach Civic Association recognizes Gail as an extraordinarily valuable and important person to the community,” Bob Wright, the civic association’s CEO and chairman, said Friday. “She has gone out of her way for many years to serve in many appointed and elected capacities, including as mayor.”

Coniglio served on the Recreation Advisory and Landmarks Preservation commissions before being elected to the Town Council in 2007. In 2011 she was elected mayor, a post she held for a decade until her retirement in early 2021.

A few months later, she returned to public service when the council appointed her to the Planning and Zoning Commission, whose members named her as chairwoman at her first meeting.

Coniglio is a North End resident and restaurateur whose family moved to Palm Beach in the 1980s. She is the mother of six adult children and nearly 20 grandchildren.

During her tenure as mayor, she carved a reputation for her diplomatic and collaborative approach to tackling the issues, enabling her to cement lasting ties with regional, state and federal government leaders.

Her patient persistence and tireless energy led to great strides in securing financial and environmental permitting support from the state and federal governments for the long-term protection of the town’s beaches and upland properties, observers have said.

“She worked very hard and did a lot of good things for the town,” said Michael Pucillo, vice chairman of the Civic Association’s Executive Committee and a former council member and president.

Among her many accomplishments, shore protection immediately comes to mind, Pucillo said.

“She really made a lot of progress with the U.S. Army Corps of Engineers and with the Florida [Department of Environmental Protection] in terms of advocating for the town’s interests financially and for flexibility – getting [inlet-dredged] sand onto the beaches as opposed to being dumped offshore.”

Michael Ainslie, Executive Committee treasurer and a former zoning commission chairman, said there is no one more deserving of the Bill Brooks award than Coniglio.

“Gail is the shining star of Palm Beach citizens,” Ainslie said. “She has continuously for the last two decades given of her time, wisdom and passion for this community. There is no one else in her league.”

Coniglio has described her 10 years as mayor as a “labor of love” highlighted by the working relationships she forged along the way and by the privilege of serving as mayor during the town’s 100th birthday celebration in 2011.

Top accomplishments under her watch included the securing of a 50-year commitment from the federal government to renourish nearly three miles of shoreline at Midtown Beach with a mix of federal, state and local dollars. The cost-sharing arrangement included a $25 million federal grant jointly announced by Coniglio and U.S. Rep. Lois Frankel in 2018.

The establishment of the Palm Beach Island Beach Management Agreement with the Florida DEP has streamlined environmental permitting requirements for beach fills.

Other achievements included an accelerated upgrade of capital improvements; the 2017 launch of a 10-year plan to bury all overhead utility lines on the island; the renovation of Town Hall and Town Hall Square; the 2019 opening of the Morton and Barbara Mandell Recreation Center; and the extension of the Lake Trail under the new Flagler Memorial Bridge that opened in 2017.

“She’s been a great public servant for 10 years and deserves this recognition,” Pucillo said.

Tickets are still available to attend the annual award breakfast, which will feature a “Monday Sitdown” interview with Willie Geist, the popular television personality and anchor of NBC’s Sunday Today.

Individual breakfast reservations are $200 for civic association members and $300 for non-members. The event is being sponsored by Florida Crystals.

A VIP dinner and reception for Geist will be hosted at a private residence on the evening of Sunday, Feb. 27.

For reservations, to the breakfast or VIP dinner, call the civic association membership office at 655-0820 or register online at palmbeachcivic.org.