Our Town with William Kelly: Councilwoman – State should allow local control over pesticide use 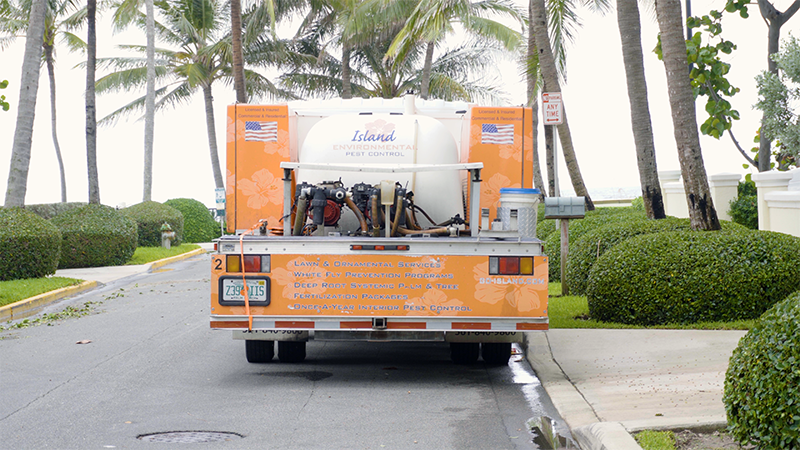 Councilwoman Bobbie Lindsay says she hears from residents upset about being inadvertently sprayed with toxic chemicals intended to kill weeds or insects.

“It happened to a father and his daughter on their way to the school bus,” Lindsay said at the Jan. 11 Town Council meeting. “I get calls once a month from somebody saying, ‘What do I do?’”

There’s not much that residents or the town can do. Local governments cannot regulate the application of herbicides or pesticides because state law doesn’t allow it, said Lindsay, who was herself accidentally sprayed with a pesticide while walking on the Lake Trail.

“I think this is a public safety issue for us,” she said.

Florida is one of 43 states with preemptive laws that prohibit local governments from adopting their own regulations to control the use of chemicals applied to lawns, shrubs and hedges to help keep them looking green and attractive. Lindsay said these laws likely originated with chemical companies lobbying lawmakers for control of pesticide regulations in states where commercial agriculture is a large economic force.

But she said the preemptive law should not apply to towns like Palm Beach. “One size just doesn’t fit all,” Lindsay said. “A small barrier island like Palm Beach, with no commercial agriculture, should be exempted.”

Lindsay wants the council to adopt a resolution asking the state to allow exemptions so local governments can regulate the use of pesticides and herbicides within their communities. Environmental lawyer Lisa Interlandi, who is executive director of the Everglades Law Center, is preparing a draft for the council to consider next month.

“It would request that the state legislature and our governor exempt us from this kind of law so we can better protect our residents and businesses from this unnecessary toxic exposure,” Lindsay said. “This would put us in a better position where we could regulate over spraying.”

Since joining the council in 2016, Lindsay has spearheaded several environmental initiatives including a 2019 seasonal ban on fertilizers containing phosphorus and nitrogen, which are nutrients associated with outbreaks of harmful blue-green algal blooms. She is a former member of the Shore Protection Board and founder and former president of the non-profit Save Our Inlet Coalition.

Pesticides and herbicides such as Roundup have been linked to diseases including lymphoma and Parkinson’s disease, Lindsay noted at the council meeting.

The over spraying of pesticides and herbicides poses a threat to the safety of town residents, including children and pets, she said. People are exposed to airborne chemical spray or unwittingly walk into pools of chemicals that have flowed from sprayed plant material that reaches into the public right of way, she said.

Lindsay showed the council a picture of a hedge in Midtown sprayed with a toxic chemical to control the whitefly pest. Beneath it lay pools of dark liquid that had dripped down onto the sidewalk.

People walk through the hazardous substances, sometimes along with their dogs or baby strollers, pick it up on their shoes then track it onto the floors of their homes, where they are re-exposed to it, she said.

The Lake Trail abuts many private properties whose owners probably don’t realize their gardeners are contaminating the popular walking and bicycle path with these chemicals, Lindsay said.

“I see all those little kids with training wheels, strollers, and dogs, and this isn’t safe,” she said.

The chemicals are also detrimental to nature itself.

“Many of these chemicals, while targeting the whitefly, kill dragonflies and butterflies,” Lindsay said. “Any other insect on the plant and in the area also dies. They kill everything – every beneficial insect.”

When it rains, the toxins are washed into the storm runoff, ending up in local waterways and the Atlantic Ocean, she said.

“We are such a small residential community, with such a large amount of spraying, that I think it would be good to look and see if there is something we could do to get an exemption,” she said.

Like Lindsay, Araskog said she has personally found herself on the wrong side of a chemical applicator.

“I was driving by and someone spraying for whitefly turned and sprayed right inside my car window,” she said.