Our Town with William Kelly: Police and firefighters in line for charitable retirement benefit 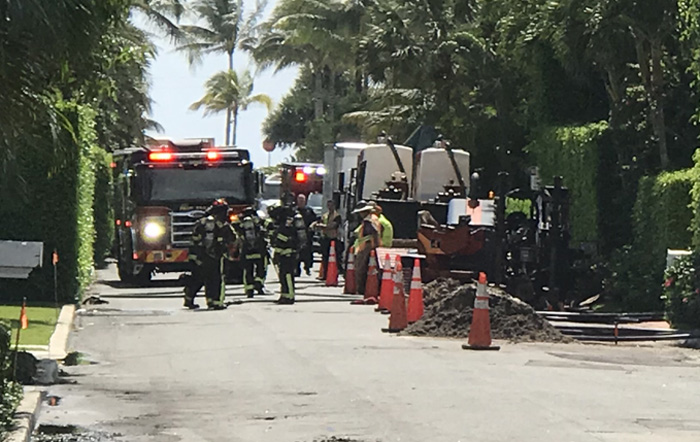 Police and Fire-Rescue department employees will be eligible to receive a retirement benefit provided by a non-profit foundation under an agreement approved Tuesday by the Town Council.

The benefit, which will be in addition to the retirement benefits the employees are eligible to receive from the town, is intended to boost employee retention in the two public safety departments.

The first responder foundation was incorporated in January 2021 by leaders of the well-established Palm Beach Police and Fire Foundation.

The first responder foundation’s registered agent is John Scarpa, who is also chairman, chief executive officer and co-founder of the police and fire foundation.

“We think this retention program is truly transformational and perhaps the first one [of its kind] in the United States,” said Scarpa, who also is a member of the Palm Beach Civic Association’s Executive Committee.

The elected officials, along with Town Manager Kirk Blouin and Police Chief Nicholas Caristo, expressed their gratitude to foundation leaders Scarpa and Tim Moran, and to foundation board members Howard Bernick and John Preston, who were the driving force behind initiative.

“This plan includes civilians that work in those two departments, too,” Mayor Danielle Moore said. “You’re not only taking care of those who are sworn and who we see on a regular basis, but also those civilians who are behind the scenes and who make [police and fire-rescue services] more transformational for our entire community.”

Moore said she, Blouin and other town staff are discussing the creation of a “public-private partnership” that would provide a similar benefit for the town’s general employees.

“The ‘mayor’s appreciation program’ will help to provide something for the general employees who are not included in this particular plan,” Moore said. She said she would take the lead in fundraising for the new program once it is established.

The benefit approved Tuesday would be available to all public safety department employees who work more than 1,000 hours in a calendar year (an average of about 19 hours per week). Participants in the town’s deferred retirement or DROP program would not be eligible.

The town will not provide funding for the plan or be involved in its administration, Blouin said. It will be managed by a third party and maintained in addition to the town’s existing employee retirement plans, he said.

Moran, who is president and co-founder of the police and fire foundation, wrote in a letter to Moore, the council members and Blouin that Bernick and Preston “firmly believe that supporting and incentivizing the town’s first responders is the best way to foster loyalty and ensure committed service to our community,”

“We at the foundation firmly believe that this unique program – the only one of its kind in the country – will beneficially impact the life of every employee who receives this benefit.” Moran wrote.

Council President Margaret Zeidman called the plan an “epic” development for the town. “This has not been done before,” she said. “It took a lot of genius to figure it out and a lot of willpower to make it happen.”

Each year, an amount determined by the foundation will be contributed to the plan and then allocated to participant accounts on a “uniform percentage of compensation basis,” according to Moran. In accordance with federal law, employees earning more than $130,000 per year will be placed in separate classes and may not receive an allocation.

Taxes will be deferred until the employee retires and begins receiving payments from his or her account.

Employees will be able to direct the investment of their retirement accounts among several investment options so each account can grow over time. Employee contributions to the accounts will not be allowed, Moran wrote.

The foundation retirement plan would be effective as of Dec. 31, 2021.

Moran wrote that the foundation’s goal is to announce the new retirement program at the Palm Beach Policemen’s and Firefighters’ Ball on March 19. The first contributions would be made before the end of the foundation’s fiscal year in June.

The two public safety departments suffered problems with morale, recruitment and retention after a previous Town Council made deep cuts to retirement benefits in 2012. The council has since partially restored those benefits and boosted pay for police and firefighters in 2019 after a study showed the town trailed competitors in the regional market.

Blouin said Friday that conditions in the two departments have improved because of the council’s actions. He said police and fire foundation leaders approached the town about creating the additional retirement plan to further strengthen recruitment and retention.

“That is the desired result,” Blouin said. “There is no question that that will happen. This will foster loyalty and further strengthen the relationship between members of the community and the police and fire organizations.”

The police and fire foundation was incorporated in 2006 as the Palm Beach Police Foundation with the primary goal of providing scholarships for the children of police officers. It later expanded its scope to include the Fire-Rescue Department.

Blouin said that, because of its strong leadership and the philanthropic spirit of residents, it quickly became a force for the good in the community.

“They have the ability to touch everyone’s lives in these departments,” he said.

A major emphasis of the police and fire foundation has been to provide scholarships for the children of police and firefighters. But not all employees of the two departments have children.

Bernick said the new retirement plan was conceived in part “to try to touch those in the departments who don’t have children.”

Moore said she has had generous offers from leaders of the police and fire foundation to help with the new plan she intends to establish for the general employees.

“I hope I’ll have your support with both the cheerleading and the financial,” she told Scarpa and the other foundation leaders.

Moore said there are many options and details to sort through and the plan has not yet taken shape. Blouin said that will take some time, but that the general employees should realize that they aren’t being left behind.

“I want to let them know that they are valued,” he said. “I appreciate Mayor Moore taking the lead on this [new program] and going out and gathering information … Every employee is valued. I just want to make that clear.”