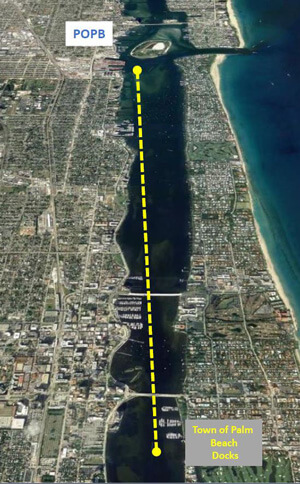 By: R. Michael Brown, Civic Association Communications Director — The Florida Inland Navigation District (FIND) plans to dredge the Intracoastal Waterway between the Port of Palm Beach to the Town of Palm Beach Docks to a depth of -12 feet at average low tide depth.

Approximately 90,000 cubic yards of material will be removed from the Intracoastal bottom along the 4.5 mile route.

The plans show that the project will start at the Port of Palm Beach and proceed south. After bids are received by FIND and the project is awarded, the dredging company will have 180 days to complete the project.

In addition, there is an old 5-inch AT&T abandoned conduit that lies within the Intracoastal Waterway channel bottom that will be removed.

The District is holding a mandatory pre-bid meeting for dredging contractors at 11:00 AM, September 20, 2018 at the project site at Riviera Beach City Marina located at 200 E 13th Street; Riviera Beach, FL 33404.

Maintenance dredging bids are being received at FIND at its offices in Jupiter, Florida until 2 PM, October 4, and then the bids will be publicly opened.